EAST BRUNSWICK, N.J.—Once again, the highlight of this weekend's movie-watching adventures is a much older release, this one a neglected film noir from the late 1950s. 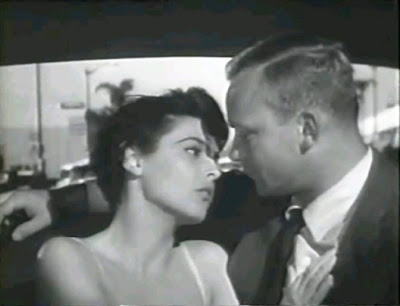 Nightfall (1957) is an extraordinarily taut thriller from director Jacques Tourneur, whose most famous noir, Out of the Past (1947), is rightly considered a classic. Though the later film doesn't have a tortured gumshoe as its protagonist, it is also focused on a man who tries to avoid facing a troubled past until that past catches up with him (as troubled pasts often must do in film noir). Art Rayburn, an unassuming wannabe artist (Aldo Ray), finds himself being tracked by two bank robbers (Brian Keith and Rudy Bond) and an insurance salesman (James Gregory) over a case of money that he lost in the snow in Wyoming. To the woman (a young Anne Bancroft) he meets in a bar at the beginning of the film—and who becomes his confederate and love interest—he introduces himself as Jim Vanning, having picked that alias in a futile attempt to escape his previous troubles.

Before seeing Nightfall in a pristine new 35mm print at Film Forum, I had never seen Aldo Ray act before, only really knowing of him via Quentin Tarantino's tribute to him through Brad Pitt's blustery Aldo Raine character (caricature?) in Inglourious Basterds. Ray is apparently known for playing tough-guy heroes in his career...so is the passive character he plays in Nightfall a mild departure for him? He projects toughness whenever he faces off with the two bank robbers (with Bond playing a far more psychopathic villain than the wearier Keith), and he has the physique to boot; but the notes of anguish and exhaustion he conveys are what sticks in the memory. A moment of moral weakness possessed him to take a case of money accidentally left behind by the two bank robbers after they leave him and a friend for dead in Wyoming; he misplaced the case when a blizzard coated Wyoming with snow, and now spends his days looking over his shoulder for the trouble that inevitably comes for him. And he's tired of it, oh so tired.

As in Out of the Past, Tourneur manages to evoke a fatalistic atmosphere via cinematographer Burnet Guffey's sharp visual chiaroscuro contrasts, with the heavy pitch blacks of night in the city—a figurative cover of darkness for the hero—contrasting with the near-foreboding brightness of the snowy Wyoming mountain landscape in the daytime. (Nicholas Ray's great 1952 noir On Dangerous Ground indulged in even sharper contrasts between darkness and light, to even more effective ends.) That landscape may eventually offer our hero a chance at some kind of redemption, but even that redemption is tinged with moral shadows. "That bag of money sure looks small from here," Rayburn says in the film's final, poetic gesture—as if to say, This what all the threats and violence was all for?

Moral gray areas; nuanced, efficiently drawn characters; unflinching threats of violence: All of that is why I love film noirs of old. Nightfall is a tight, masterful example of the style.

(Film Forum is screening the new 35mm print of Nightfall through Thursday.) 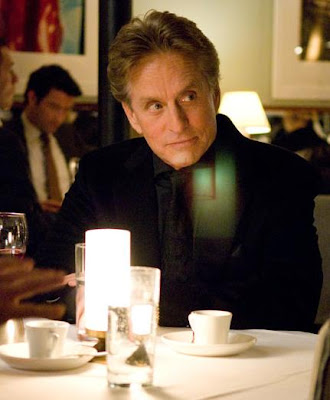 As you may have already heard, Michael Douglas is indeed the major reason to see Solitary Man (2009), Brian Koppelman and David Levien's fascinating, incisive chronicle of a middle-aged former car salesman, Ben Kalmen (played by Douglas), who gets spooked after a doctor's appointment turns up evidence of a possible heart condition and suddenly decides to indulge in a self-destructive devil-may-care lifestyle, ripping off customers at his car-dealership and chasing after women half his age. What lies underneath this damaging change? For the most part, the film leaves explanations up to the viewer, allowing Douglas's magnificently complex and detailed performance to suggest multitudes about his all-business all-the-time worldview—he considers the women he beds "transactions"—and the fear of old age and death that eventually drives his behavior past the point of all reason.
On the heels of Noah Baumbach's Greenberg, here is another spectacularly acted, closely observed film that takes an unsavory character and digs deep inside him, to the point that we may actually find ourselves caring a little bit about what happens to him—or, at least, how low he will go before he sees the light. In Solitary Man, though, even the prospect of him finally seeing that light is left open-ended; via a carefully timed cut to black, Koppelman & Levien refuse to let him off the hook entirely. 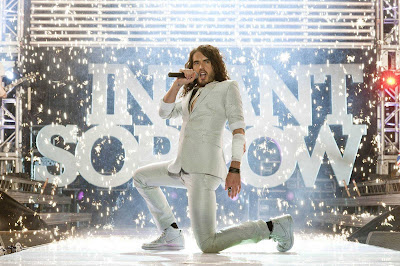 Last weekend's No. 1 box-office attraction Get Him to the Greek (2010) offers another unsavory character at the center of its raucous hijinks: Aldous Snow, first seen as the titular character's new rock-star boyfriend in Forgetting Sarah Marshall (2008), now given a full-on showcase in this spinoff film as a drugged-out has-been struggling to make a comeback. And, in a welcome surprise, Russell Brand, the British comedian who plays Snow, comes through with an affecting performance that comes close to making its sentimental My Favorite Year-inspired clichés play, well, less sentimentally. Listen, for instance, to the way Snow talks to his former wife Jackie Q (Rose Byrne) on the phone in one scene: Instantly, one can sense a lingering intimacy and tenderness that brings unexpected poignancy to a scene that, for all I know, was probably scripted by writer/director Nicholas Stoller as a lame excuse to throw in a Lars Ulrich cameo (hey, that's the lead singer of Metallica topless and in bed with Rose Byrne; ain't that inherently hilarious???).
Brand has many more scenes like this; even scenes where he, strung out from not having his drug fix, chews out increasingly desperate record-company intern Aaron Green (Jonah Hill) have an edge to them. They all add up to a fully formed portrait of a rock star who, at heart, wants to be loved by his audience but can't seem to get out of his own way. The movie doesn't even come close to living up to the depth of Brand's performance, but, if you can get past its shoddiness and find yourself laughing far more than I did (sorry, sticking drugs up someone's rectum isn't an automatic source of giggles for me), maybe it's worth sitting through this to get to the unexpectedly touching burst of sweetness at the end.
Or maybe you should just rent My Favorite Year.
***
I saw two other films this weekend: one a little-known, perversely entertaining piece of crap from the director of Death Wish that I will reluctantly be reviewing for tomorrow's White Elephant Blog-a-thon hosted by Paul Clark of the blog Silly Hats Only; the other an as-yet-unreleased independent film from one of the brightest new voices of the so-called "mumblecore" movement. Those I will get to later this week.

In the meantime, let's start this week off right...with an image from Hou Hsiao-hsien's wondrous Flight of the Red Balloon (2008). This image, though, has no balloons in it—just a reflection of a rising sun off the window of a moving train. Seriously, who comes up with the idea for a shot like this? Only a filmmaker was a very special awareness of the world around him, I'd say. Behold this abstract, awe-inspiring beauty: 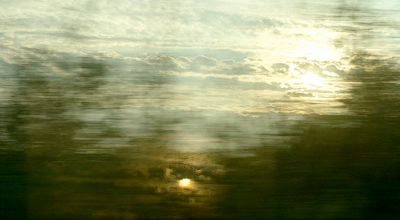