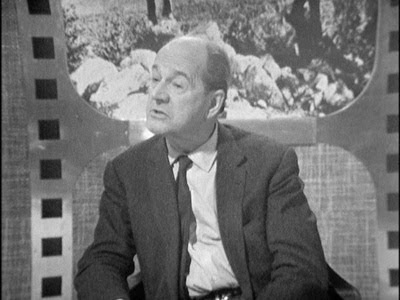 Winchester '73 (1950)
The Tall Target (1951)
The Naked Spur (1953)
The Far Country (1954)
The Man from Laramie (1955)
Man of the West (1958)
Anthony Mann's Westerns have all the standard genre elements—cowboys and Indians, vast expanses of American landscapes, horses, shootouts, lawmen and lawbreakers, and the like. But they also have a psychological—and, in some cases, near-Shakespearean—intensity that is unique, exhilarating and sometimes profoundly moving. Instead of being bound by genre, Mann, with his mastery of action choreography and visual style, used those elements to explore the darkness in men's souls, and the possibilities of redemption in even the most troubled of characters.


Man of the West offers a good summary of the Mann Western. In this 1958 film, an aging Gary Cooper plays Link Jones, a former outlaw who struggles to escape from his past as a criminal, only to find that past catching up with him when he finds himself in the presence of another outlaw, Dock Tobin (Lee J. Cobb), whom he abandoned after he had grown up with him for years. It's a fairly standard plot—an outlaw called upon to do one last score—but Mann invests the film with a visceral sense of moral danger: Will Link surrender to the violent, bloodthirsty side of him that he is trying to transcend? There's an astonishing setpiece in the middle of the film in which Coaley (Jack Lord), one of Dock's henchmen, challenges Link to a fistfight that climaxes with Link humiliating Coaley—ripping off his clothes in a figurative diminishing of his manhood—in the manner in which Coaley humiliated prostitute Billie (Julie London) the night before. It's a feat of choreography, yes...but it is also deliberate in its refusal to make the violence appear superficially exciting in the least; it's severe, brutal stuff, and Mann painstakingly denies the viewer the sense of triumph one might expect in seeing Link give this vicious knave his comeuppance. This is, of course, the kind of violence that Link is trying to actively suppress.

It's interesting, and probably fitting, that it's Gary Cooper—generally a pretty recessive actor, known more for being stoic than dynamic—playing the reformed outlaw trying to go straight in Man of the West...because Cooper is, in a sense, playing a logical culmination of the even more troubled characters James Stewart played in his Western collaborations with Mann. With Stewart—in Winchester '73, The Naked Spur, The Far Country and The Man from Laramie (and also the 1952 Bend of the River, which I wasn't able to see at Film Forum's recent Anthony Mann retrospective, ending today)—you get a startling glimpse into the psychological and spiritual traumas from which Link Jones is trying to walk away. 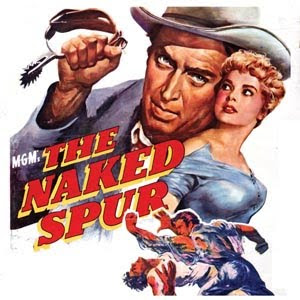 Stewart, in general, was in a phase in his acting career where he was increasingly taking on roles that actively subverted the pre-WWII clean-cut American-boy image perhaps most exemplified in Frank Capra's Mr. Smith Goes to Washington (1939)...and in his collaborations with Mann, you see some pretty dark notes emerging from the familiar Stewart persona. In The Naked Spur, for instance, Stewart's Howard Kemp sells himself as a sheriff looking for a wanted criminal, Ben Vandergroat (Robert Ryan). Eventually, however, his true motives for pursuing Ben are revealed, and they are far from purely civic: He's going after Ben more for the reward money, with which he intends to buy back the land his ex-fiancée sold while he was away at war. Essentially, he's still obsessing over a past that he is desperately trying to get back. 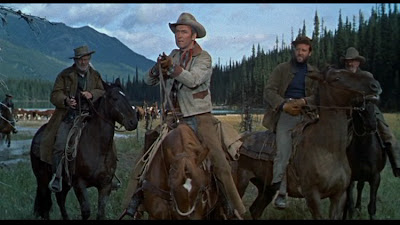 Money is also the main concern of Jeff Webster, the antihero Stewart plays in The Far Country, set in Alaska during the Klondike gold rush. What's troubling about Webster is his rabid self-interest; he seems to not give a damn about anyone or anything unless it helps his quest for riches. Even when he finds himself amidst corruption and ineffectual law enforcement in the town of Dawson—where he intends to sell his cattle for a fortune in beef—he seems to care little for the townspeople's well being even when corrupt judge Gannon (John McIntire) rides in and usurps control over the town.

Revenge is also a major motivator in the Mann/Stewart Westerns. For all the narrative passings-of-the-torch in Winchester '73, the film eventually boils down to Lin McAdam's (Stewart) quest to avenge the death of his father at the hands of Dutch Henry Brown (Stephen McNally), who, it is revealed, is Lin's brother. And The Man from Laramie presents another stealth vengeance narrative in which Stewart's Will Lockhart seeks the man among the Waggoman ranching family responsible for selling firearms to the Apache tribe—a move that he believes resulted in the death of his brother in the line of Apache fire. 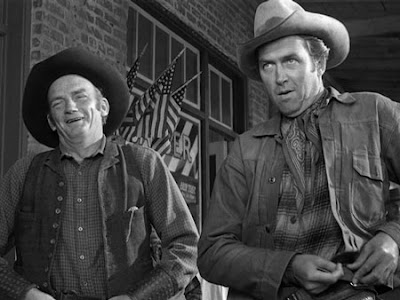 In none of these Mann/Stewart collaborations are the main characters ever presented in a flattering light; Lin McAdam and Will Lockhart may be relatively more noble than Howard Kemp or Jeff Webster, but neither Mann nor Stewart make it easy for us to warm to them as straight-up heroes. There is always something mysterious about these characters—the sense that they may well be capable of anything, even harsh violence, in their personal quests. However charming their surface manner, their depths may frighten you.

And yet, for all the psychological warfare on display in these films, Mann always allows for a measure of redemption for his twisted heroes. 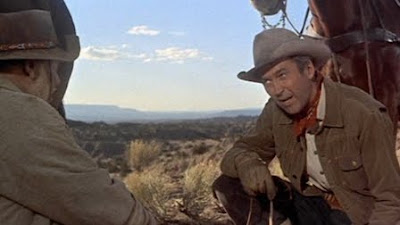 Sometimes that redemption comes simply in the form of a hero successfully achieving his goals after great struggle. After all, in Winchester '73, Lin does achieve his revenge...though only after the gun Dutch steals from Lin—the titular Winchester '73—passes through various hands and deeply affects all the lives it touches. And in The Man from Laramie, Will does discover the identity of the man who sold the weapons to the Apaches—even if, in the process of his discovery, he helps brings down an entire ranching dynasty in the process. And of course, there's that pesky bullet he takes in his right hand...

But the road to redemption can be more complicated for other Mann protagonists. The Far Country's Jeff Webster experiences a moment that cracks his self-interested facade when Gannon and his henchmen kill his friend Ben (Walter Brennan); only then does he take it upon himself to violently re-establish order in Dawson. It takes a hard-hitting personal tragedy for him to find the heroism that perhaps was always in him.

The most grueling and transcendent redemption of all, though, comes to Howard Kemp in The Naked Spur, through Lina Patch (Janet Leigh), the woman who accompanies Vandergroat after her father is killed during a robbery attempt in Abilene. Craving emotional stability from a male companion, Lina gradually becomes romantically drawn to Kemp as Vandergroat begins to more fully reveal his irrational side. But will Kemp ever be able to let go of the memory of Vandergroat's previous transgressions, even after death, to provide Lina the dependability she desires? Mann—in a conclusion that may well be the most profoundly moving passage in the Mann films I saw at Film Forum—eventually offers hope for Kemp as his thick macho armor gradually cracks in Lina's presence after Vandergroat has been killed, as you can see here:


The Mann hero, then, is neither completely villainous nor completely heroic; he may be driven by selfish and impure motives, but he has goodness within him that eventually comes out. In short, Mann's vision of humanity in these Westerns is anguished but ultimately hopeful—a hopefulness for people's capacity for change that feels completely earned in context because of how deeply he and his actors are willing to stare at the moral abysses underneath the characters' feet in the first place. 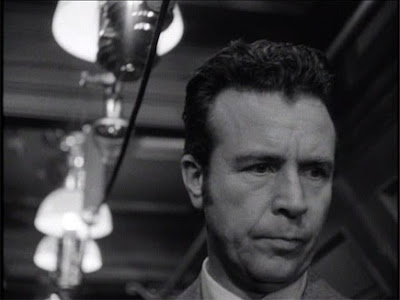 Alas, I didn't get a chance to see any of Mann's noirs, which I hear presents a bleaker picture of humanity (as noirs have a tendency to do). I did, however, see The Tall Target—a fictional retelling of one New York cop's (Dick Powell) efforts to foil a by-now-little-known plot to assassinate Abraham Lincoln on the eve of his presidential inauguration in 1861—in which Mann resourcefully creates a down-and-dirty atmosphere that feels genuinely noirish (a refreshing tactic considering its historical basis). It's an exceptionally tight and gripping thriller—it runs a mere 78 minutes—but that is not to say that its content isn't worth considering.

The cop, named John Kennedy (yes, you read that right—though I don't think his middle name is "Fitzgerald"), is himself a bit of mystery for most of the film. At first, one assumes that his motives for pursuing his suspicions is simply professional. But then, at one point late in the film, Rachel (Ruby Dee), a slave who is onboard the train containing the assassination suspects, asks Kennedy about his interest in foiling the plot, and it is then that he recounts his experience shaking hands with Lincoln and feeling a general sense of hope.

You know what that sounds like? It sounds like the atmosphere that greeted the election of our current president, Barack Obama. Who knew that this crackerjack piece of suspense entertainment from 1951 would still be amazingly relevant today in the way that Dick Powell, in this one wondrous and chilling moment, expresses the kind of borders-defying sense of hope that was Obama's major calling card in 2008? Maybe in that sense, The Tall Target really does tie into Mann's later Westerns in its belief in the capacity for the good in people to overcome evil.

(All of these films—and plenty more by Anthony Mann—are available on DVD, though The Tall Target is available only as a DVD-R via Warner Bros.'s Archive Collection)
Posted by Kenji Fujishima at 7/15/2010 07:30:00 AM

And don't forget his epics! Mann's career had three pretty impressive chapters, but his western phase is, I think, the most memorable with Winchester, Naked Spur and Laramie being the cream of the crop. Maybe Bend of the River, too.

Incidently, both Wagstaff and myself wrote some admittedly jumbled pieces on Winchester '73 and The Far Country a while back - Wagstaff noted a similar dark side to Stewart's character, though my piece had little in the way of analysis.