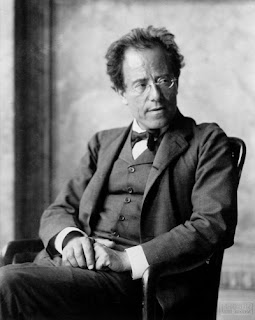 Mahler's music holds a very special place in my heart, for reasons that are as much about nostalgia as about the extraordinarily rich, ambitious and influential music he gave the world. Throughout my high-school years, I pretty much couldn't stop listening to his symphonies, finding in these generally large-scale musical epics entire universes that spanned the entire range of human experience, from the heights of ecstasy to the depths of despair. In short, it was music that spoke directly to my neurotic self. It still does.

For my money, the most representative of Mahler's music lies in one of his less popular symphonies: the Sixth, which I actually wrote about at length at The House Next Door here. The piece is often dubbed "Tragic," and certainly the work's despairing conclusion bears out its unofficial subtitle—but the Sixth is far more than relentless doom and gloom. It encompasses extremes of sonority and emotion, touching on sometimes straight-up bizarre notes of bitter irony and pastoral spirituality in its march to a sonic scaffold. Stylistically, too, it represents a clash between the late Romanticism of his early music and the modernist bent of much of his later work. (Arnold Schoenberg, Alban Berg and other Second Viennese School composers in the first half of the 20th century all publicly expressed admiration for the work, with Berg even going so far as to proclaim it "the only Sixth, despite [Beethoven's] Pastorale.")

If you want to experience Mahler at arguably his most unhinged, his Sixth Symphony fits the bill (though his even more forbidding Seventh runs it close). But really, all of his works are monuments of visionary imagination and passion for life in all of its splendor and gloom. They're truly something to behold and treasure—now more than ever.

For a taste, here is Leonard Bernstein—one of the most famous interpreters of Mahler's music, instrumental as he was in bringing them, especially lesser known works like the Sixth, wider exposure and popularity in the 1960s—conducting the Vienna Philharmonic in the first movement of the Sixth in this filmed performance, shot by director Humphrey Burton in 1976 (and available on DVD here):

P.S. Fans of Shutter Island—of which I am one—might be interested to know, if you don't already, that the piece of music Max von Sydow's Dr. Naehring is listening to upon his introduction in the story is from Mahler's Quartet for Piano and Strings in A minor—his only known chamber work, written while in his mid-teens in 1876. Oh that Martin Scorsese, always having a knack for digging up these pieces of music and using them immaculately in his films!
Posted by Kenji Fujishima at 7/07/2010 10:30:00 PM