In Which I Try to Tap Into Fatih Akin's Soul 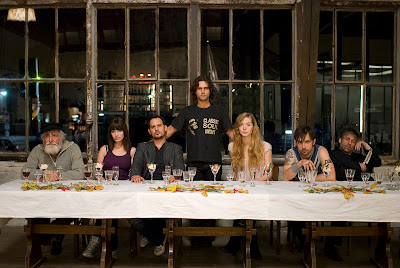 My latest contribution to The Wall Street Journal's Speakeasy blog is an interview I did with German-Turkish filmmaker Fatih Akin, whose latest film, Soul Kitchen (2009), comes out in limited release tomorrow and on demand Aug. 25. (In New York, it's playing at IFC Center.) In the interview, Akin discusses, among other topics, the difficult creative process behind the making of the film, his mixed ethnic background and even his belief in a higher power.

Read it, and then go check out the film—which isn't quite my favorite Akin film among the three I've seen (The Edge of Heaven (2007) and Head-On (2004) are the others, with my preference being for the earlier film), but which is still a lot of fun. If Akin, as he suggested in the interview, was consciously aiming to make a crowd-pleasing comedy with this one, then, in the mind of this particular member of the movie-going crowd, he more or less succeeded.
Posted by Kenji Fujishima at 8/19/2010 03:15:00 PM