EAST BRUNSWICK, N.J.—As I may have mentioned on this blog recently, and as those of you who follow me on Twitter perhaps already know, I am in the process of trying to find an apartment in New York in which to live. I've mostly been looking in the Brooklyn area because one of my potential roommates is planning to return to school in the fall in an area that is ostensibly closer to Brooklyn than Queens is.

This past Saturday, my apartment hunt took me to Sunset Park, a neighborhood that's a bit south of the ever-popular Park Slope. I had never been in the area before, and honestly I hadn't even heard of it until I started trolling Craigslist apartment listings recently and noticed quite a few of them in that area within my specified price range. But, at least in my brief exposure to Sunset Park on Saturday, it's actually a nice area: quiet, reasonably scenic and homely. It also seems to have a fairly wide variety of ethnicities coexisting there: Chinese, Hispanic, African-American, just plain American. This pleases me; I'm all about variety in general.

A few blocks away from the apartment I tried to look at (I explain the "tried to" part in the postscript below) is the actual park named Sunset Park, and while it's fairly small—two blocks north-to-south, two blocks east-to-west—it's also rather breathtaking. If nothing else, it offers some lovely views of New York City, as you can see here: 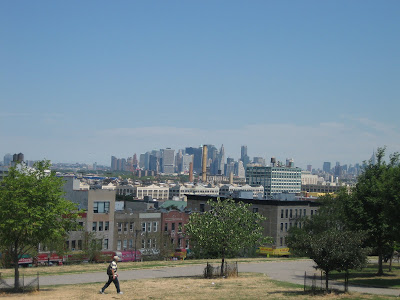 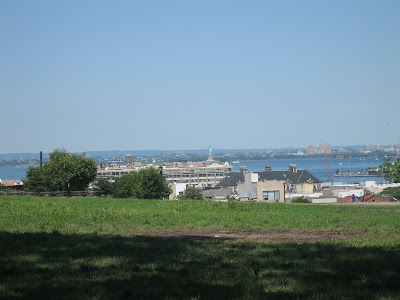 Oh, and there's also this:


Chinese pop music? Blasting from a radio? At 11 a.m. in the morning on a beautiful sunny day? I felt like I was at home already!

P.S. Who knows, though, if Sunset Park is where I'll end up living? When the realtor for the apartment I was hoping to view showed up, we discovered that the key he had was only good for opening the apartment building door (which was already open anyway) and not the unit itself! I haven't yet heard back from the realtor as to whether he has been able to procure the actual apartment key since then, and each day I don't hear back from him, my hopes for being able to see this apartment in this potentially promising spot dwindles. So for now, the apartment hunt continues...
Posted by Kenji Fujishima at 8/04/2010 12:01:00 AM