Surely everyone goes through those periods of time where one particular piece of music obsesses them, to the point that said piece of music simply refuses to leave your head. I'm currently going through such a phase with French Romantic composer Hector Berlioz's Symphonie fantastique, its hair-raising final "Dream of a Witches' Sabbath" in particular.

The French composer's five-movement work, written in 1830, is perhaps most famous for its groundbreaking use of a program to go along with the music, one that is said to have been based on an obsession the composer himself was experiencing with a woman. According to Berlioz's Memoirs (translated here by Michael Austin):

A young musician of morbid sensitivity and ardent imagination poisons himself with opium in a moment of despair caused by frustrated love. The dose of narcotic, while too weak to cause his death, plunges him into a heavy sleep accompanied by the strangest of visions, in which his experiences, feelings and memories are translated in his feverish brain into musical thoughts and images. His beloved becomes for him a melody and like an idée fixe which he meets and hears everywhere.

Each movement, then, represents episodes in the life of its musical protagonist, some "real," others projections of his troubled mind. Its tumultuous first movement sets the stage, then; and its second and third movements are set in a ball and out in the countryside, respectively—idyllic moments in which memories of the protagonist's beloved darken the aural landscape. But then the piece becomes truly surreal: the fourth movement is a "March to the Scaffold," in which, as Berlioz describes, his protagonist has an opium-induced vision that he has killed his great love and now sees himself witnessing "his own execution [emphasis Berlioz's]."

He sees himself at a witches’ sabbath, in the midst of a hideous gathering of shades, sorcerers and monsters of every kind who have come together for his funeral. Strange sounds, groans, outbursts of laughter; distant shouts which seem to be answered by more shouts. The beloved melody appears once more, but has now lost its noble and shy character; it is now no more than a vulgar dance tune, trivial and grotesque: it is she who is coming to the sabbath… Roar of delight at her arrival… She joins the diabolical orgy… The funeral knell tolls, burlesque parody of the Dies irae, the dance of the witches. The dance of the witches combined with the Dies irae.

Believe me, the music—still intoxicating as ever, what with its shrieking winds and spectral strings—fully lives up to Berlioz's description, with nothing held back in intensity.

Putting aside Berlioz's written program, however, on an absolute-music level, Symphonie fantastique is a classical symphonic structure that more or less conforms to fast-moderate-slow tradition in its first three movements—save for a few choice disturbances in the fabric (the frenetically swirling conclusion of the second movement's graceful waltz music, for instance)—until it goes off the rails in its last two movements, climaxing in a no-holds-barred fury as the hero seems to stare into some sort of mental abyss. Berlioz, it seems, was dipping his toes in the classical style while unleashing his extravagant orchestral imagination to puncture that style, first by subtle degrees, then in full force. He may have helped usher in the Romantic period of the 19th century, but he was not above relying on lucid, time-honored structural means to realize his visions. 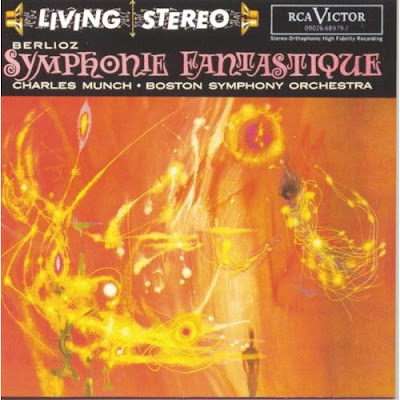 I recently listened for the first time to an early-stereo recording of the Symphonie fantastique from 1954 featuring French maestro Charles Munch leading the Boston Symphony Orchestra...and boy, I feel like my head is still bearing remnants of its thrilling ride. Munch's reading of the first three movements is mostly notable for its classical poise—but then, for the most part, so is the piece itself. But then he and his fine orchestra turn the heat up a notch in the steady but forward-moving "March to the Scaffold"...and then truly lose it in the "Dream of the Witches' Sabbath," with Munch pushing fast tempos near their breaking point in ways that, as far as I know, no other conductor—certainly not the more classically-minded Berlioz specialist Sir Colin Davis, in his various recordings of the piece—has dared, at least on record. The effect is shattering, exhilarating—an honest-to-God rush.

Seriously, folks: Even if you don't listen to much classical music, you owe it to yourself to hear this performance all the way through, primitive-sounding stereo and all. You won't regret it.

To give you all a taste, here's Munch conducting the Boston Symphony Orchestra in the "March to the Scaffold" movement from the Symphonie fantastique, from 1962 (the user who posted the video has disabled embedding, so you'll have to click on the link provided above).
Posted by Kenji Fujishima at 8/11/2010 12:01:00 AM