Mikey and Nicky, and Films That Hit (Too) Close to Home 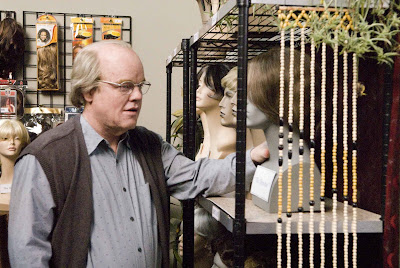 Two of my favorite pieces of writing on Charlie Kaufman's 2008 film Synecdoche, New York—outside of Roger Ebert's definitive take—are Andrew "Filmbrain" Grant's two-part examination of the film's thematic and philosophical intricacies, and the review written by Film Freak Central's Walter Chaw (both of whom, by the way, appear in an extra on the film's DVD, along with two other favorite critics of mine, Some Came Running's Glenn Kenny and Los Angeles Weekly's Karina Longworth). I value both these pieces of writing because both dare to inject the personal element into them while also trying to take the film on in something close to an objective manner. For Grant, the film hit home so hard for him that he went on an alcohol binge the night after seeing it for the first time; Chaw similarly admitted that the film made him feel depressed for weeks afterward, and one of the conclusions he draws about Kaufman's work is that "the more it's examined, the more it's a dissection of the critic's own fears and prejudices."

Though I myself am more of a detached admirer than a passionate advocate of Synecdoche, I think I understand the film Grant and Chaw saw: the kind of work of art doesn't just mess with your mind, but has the power to possibly even scar you emotionally. 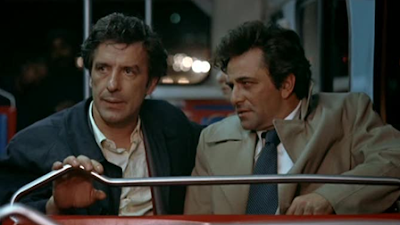 This past Saturday, at Brooklyn Academy of Music, I saw, for the first time, Elaine May's 1976 film Mikey and Nicky. For those who don't know much about this film: It's a comedy-drama about down-on-his-luck hustler Nicky (John Cassavetes) who calls upon his old friend Mikey (Peter Falk) in a moment of desperation: Nicky knows a crime boss has ordered a hit on him, and, fearing for his life, calls upon Mikey for help. Over the course of the night they spend together, they get into an aimless series of adventures, shooting the shit, baring their souls, getting into bitter arguments and generally bonding in their own way. Alas, Mikey, it is revealed early on, is in on the hit on his friend, and the film features scenes which suggest long-seated tensions in their friendship that eventually explode in a devastating conclusion that suggests limits to male comradeship.

There's not much of a plot to speak of outside of those bare outlines; Mikey and Nicky is a series of episodes in which the two titular characters' friendship is tested, and it is all done in an unnervingly realistic, improvisatory manner that suggests the mold-breaking style of Cassavetes's own directorial efforts. May uses this loose structure to touch on all sorts of heady subjects: life, death, religion, friendship, masculinity, femininity.

It's a rich and almost unbearably poignant work...and, for this viewer, it's a film that truly hit close to home for me in ways I didn't even fully realize until the next morning.

There is one particularly painful scene in the middle of the film in which buried resentments between the two friends are thrust into the open, with Mikey accusing Nicky of, among other things, only being friendly with him when he's in trouble. Somehow, during this scene—which climaxes in a near-fistfight between the two—I began to think about some of my own friends, and whether I have been less than appropriate friendly to them in recent weeks.

I thought about one friend in particular: someone who I've known since middle school, who I've hung out with often over the years, to the point that we're considered a kind of unofficial couple among our circle of friends. Just about every week, we're usually seeing a movie together, to give you an idea of just how close we are. Recently, though, I've kept a certain distance from him. It's not entirely deliberate, mind you—other social engagements and weird work schedules have gotten in the way. But I've also come to realize that there are many other people in whose company I find more genuine pleasure than I do when I'm around him.

This friend had texted me earlier in the day asking me if I was interested in seeing The Expendables that night—and for maybe the third time in about a month, I had to turn him down because I had already planned to see Mikey and Nicky and then have dinner with someone that evening. Obviously, there wasn't much I could do about it at that point; plans had already been set. And yet, when I turned him down this time and saw that he didn't respond back for the rest of the day, I nevertheless felt a twinge of guilt, mostly out of the deep-seated realization that perhaps I was partly trying to avoid him. (I went to Los Angeles with him earlier this year, and as the week dragged on, the silences between us got longer and longer.) So when I saw this particular scene in Mikey and Nicky, some of that guilt started rushing back to me again, a feeling only intensified by the film's tragic final shot of a startled Peter Falk.

The last thing I expected, though, was to actually end up seeing my friend later that night...in a dream—a dream in which he verbally, and angrily, expressed to me everything I feared he was feeling after all these rejections: snubbed, jilted, ignored. He's not the type to get visibly angry, so to dream of him acting sarcastically bitter and wounded in front of me was, well, nightmarish. I awoke from that dream shaken, and that feeling didn't really leave me for the rest of the day.

That cannot be mere coincidence. Mikey and Nicky has had a more profound effect on me than I even realized upon exiting the theater Saturday evening. I'm still thinking about the film: about what it says about the sometimes tenuous nature of friendship and loyalty, and about how it pertains to my own life. Maybe I'm just not as good a friend to even supposedly "close" friends as I am to others. This film won't leave me alone. I have no doubt in my mind that this film is a masterpiece, but I'm almost afraid to revisit it. Do I dare feel that same sense of shame again?

I've detailed a mostly subjective reaction to this film, of course, one which probably won't apply to everyone. But I'd like to think my personal experience with the film is not exclusive to me, and that the film is universal enough in scope to touch others in a similar way.

If it ain't Mikey and Nicky or Synecdoche, New York, what other movies have had a comparably powerful effect on you? Comment away; I'd love to hear about your too-close-to-home movie experiences.
Posted by Kenji Fujishima at 8/17/2010 12:01:00 AM

shouldn't this be called 'my life at 24 whines per second' ? your constant insecure thought posts are really really tiresome.

Thanks for your input, Felicia. Sorry my content isn't to your liking. Somehow, though, I don't think I'll be losing any sleep over the prospect of losing your readership, however...

Synecdoche left me walking out of the theater in stunned silence. No Country for Old Men had the same effect on me to an even larger extreme. Movies that leave you speechless are rare, but whenever one comes by I never forget it.

An older film that left this kind of impression on me is John G. Avildsen's Save the Tiger, with Jack Lemmon as Harry Stoner. It ends with a little league game that just sort of crushes you.

I've never heard of Mikey and Nicky--I'll need to seek it out. It's always a pleasure to see Cassavetes and Falk together on any project.

Adam: You will not be disappointed by Cassavetes and Falk in Mikey and Nicky. Here's a YouTube video that'll give you a taste of their partnership here, if you're interested: http://www.youtube.com/watch?v=e5huPJzwfj0

you won't be losing my readership. i'm using posts and other posts from bloggers as research for a psychology class. this is a goldmine. i am so happy a co-worker of yours told me about this site. by the way judging your friendship on that of two movie sociopaths says a lot, too.

Well, now I'm curious: Who is this supposed co-worker of mine you're referring to? Also, if you're actually doing research for a psychology class, as you say, should you really be posting negative comments on their blogs? Isn't that a breach of, I dunno, scientific objectivity or something like that?

oh, "i dunno", i'm not sworn to any ethics, yet. experimentation is all part of the process. as to your co-worker, someone mentioned at a social event that this was a prime touring spot for self pity mated with ego. you are talked about. feel good about that, at least.

Mikey & Nicky is a bracing work of art.

Queue and watch the film before demonstrating your trollish drive-by cowardice to the coterie of brainy aesthetes who drop in on Kenji's musings.

Better yet, post an URL to your Psych blog so we can be wowed by your academic erudition as a, ahem, "researcher."