BROOKLYN, N.Y.—As ever, there is no real theme underpinning any of the art I consumed this past week, so...I'll just get right into it.


★ The Wolf Man (1941, George Waggner), seen at Film Forum in New York
Just as Lon Chaney Sr. elevated the otherwise shallow spectacle of Rupert Julian's The Phantom of the Opera back in 1925, Lon Chaney Jr. does the same for The Wolf Man, which, outside of his lead performance, is fairly workmanlike as filmmaking (a far cry from, say, the expressionism of a James Whale or a Karl Freund). What Chaney brings to his performance as Larry Talbot—the earnest and slightly immature main character who gets bitten by a werewolf late one night while trying to save from danger a woman, and thereby becomes a werewolf himself—is a pathos that lends the film a certain tragic weight by the end. He basically is, as the repeated saying in the film goes, "a man who is pure of heart" who just gets really, really unlucky; Chaney sells this premise in his own deliberately awkward, lumbering and oddly charming way. I never found this film to be especially scary or even disturbing, but by the end, I found it strangely affecting as a character drama.


Puzzle of a Downfall Child (1970, Jerry Schatzberg), seen at Film Forum in New York
On the opposite end of the spectrum from The Wolf Man, there's this film: Panic in Needle Park and Scarecrow auteur Jerry Schatzberg's debut feature, and a work that is a brilliant piece of filmmaking that I found rather less involving as a character drama. Basically, it's about a fashion model (Faye Dunaway) whose personal traumas—obliquely suggested, never fully explained—lead her to a bunch of meaningless relationships while much of the rest of the people she deals with on a daily basis treat her as just a glamorous object to be commodified. The "puzzle" in the title is apt. Schatzberg recounts her tragic story in an Alain Resnais-inspired fractured storytelling style that switches back and forth between flashbacks and dream sequences without always making it clear where reality ends and her delusions begin. The subjective non-linear storytelling was certainly enough to keep me on my toes even as my interest in the supposedly tragic plight of this "little girl lost" admittedly waxed and waned. But at least there's the spectacle of seeing Faye Dunaway at her most neurotic, impassioned and beautiful to keep one's eyes glued to the screen.

It is No Dream: The Life of Theodor Herzl (2012, Richard Trank), seen on DVD in Brooklyn, N.Y.
This is just some documentary about the founding father of Zionism, opening soon at Quad Cinema in New York, that I agreed to review for Slant Magazine. It's...fine, I guess. More soon.

It Could Be Good, It Could Be Bad (1997/2011, Robert Gardner), seen at Museum of the Moving Image in Queens, N.Y.
Baraka (1992, Ron Fricke), seen at Museum of the Moving Image in Queens, N.Y.
Despite Baraka's high reputation, I found this much-lauded experimental documentary to be, as the saying goes, "a mile wide and an inch deep." For those who haven't heard about Ron Fricke's film: Baraka is a wordless, non-narrative documentary that tries to encapsulate, well, the world, more or less, in all its splendors and horrors. In a film like this, footage of a Balinese tribe engaging in a monkey chant coexists with time-lapse footage of people moving around in urban environments. Some of the Eisensteinian montage is fascinatingly suggestive: Fricke's juxtaposition of that time-lapse footage with discomfiting images of baby chicks on a conveyor belt may well be the closest the film ever comes to offering genuinely provocative food for thought. Mostly, though, Baraka is a travelogue that thrusts all sorts of images of global cultures, landmarks and natural events without ever once evincing even the slightest interest about what it shows beyond some banal "we are one" sentiments underpinning it all. For all its undeniable visual splendors (though some of it might have been more awe-inspiring if Michael Stearns's droning New Age-y soundtrack didn't seem to work overtime at certain points to tell us how awed we're supposed to be), its sheer superficiality eventually became grating. Pairing this with a documentary short from ace ethnographic documentarian Robert Gardner does Fricke's film no favors; if you've seen stuff like Gardner's Dead Birds (1964) or Forest of Bliss (1986), you'll recognize a genuine curiosity about these exotic cultures that Fricke is hardly interested in tapping.

Still, even as I didn't entirely warm to Baraka, I am glad to have been able to see it in a theater in an astonishingly pristine 70mm print. If nothing else, Fricke's film is best experienced in a theater, where its meditative qualities would come through more clearly. Fricke's long-awaited follow-up to this film, Samsara, is set for a theatrical release soon; I'm hoping for something more revelatory. 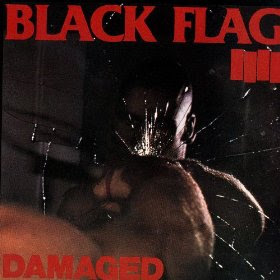 ★ New Attitude (2006, Dirty Projectors)
Either I'm finally seeing the light with this widely celebrated indie rock band, or the band is finally settling into a relatively more accessible idiom. In any case, this half-hour EP features probably the most fun track Dave Longstreth & co. had put out up until that point: "Two Young Sheeps," a concert version of the earlier "Two Sheep Asleep" that features extended improvisations and a general sense of sheer fun missing from a lot of their previous music.

Their next album, Rise Above, is a collection of covers of songs of Los Angeles 1980s punk-rock band Black Flag...which leads me to...


★ Damaged (1981, Black Flag)
My War (1984, Black Flag)
Family Man (1984, Black Flag)
I suppose I shouldn't be surprised so many of my friends expressed disbelief when I told them I was diving into the music of Black Flag, considering how much I've focused mostly on classical music in recent weeks/months. Apparently, though, I need an occasional dose of invigorating speed and noise just to switch things up. Not that speed and noise is all Black Flag is; there's real wit to their music and lyrics as well. Witness, for instance, "TV Party" from their first full-length album Damaged: a theme-and-variations tune that wrings a lot of ironic humor out of the simple situation of a group of people looking forward to watching their favorite shows on television one night. (The payoff to this is very much worth waiting for.)

Henry Rollins, Greg Ginn & co.'s next two albums are wildly mixed bags: The second side of My War is a dreadfully boring mess; Family Man throws spoken-word cuts and instrumentals into the mix, with mixed but fairly interesting results. Damaged, however, is a stone masterpiece. 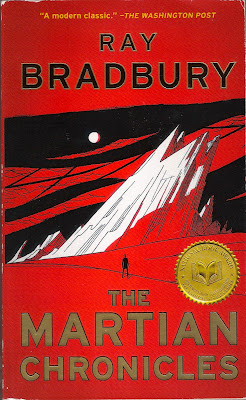 ★ The Martian Chronicles (1950, Ray Bradbury)
Yet again, a major artistic figure had to die before I was finally inspired to check out that late artist's work (don't get me started on avant-garde filmmaker Chris Marker; I hadn't even gotten around to opening that Criterion La Jetée/San Soleil DVD before he died on Monday at 91). Not that I hadn't read anything by Ray Bradbury before he died recently; I read Fahrenheit 451 (1953) years ago; and I vividly remember the aching regret that ended his short story "All Summer in a Day" (1954), which I read back in sixth grade. But only after Bradbury's death did I finally get around to reading The Martian Chronicles, which is ostensibly a novel but is more accurately a collection of vignettes that, together, tell a story of imperialism on an interplanetary scale, one that eventually comes back to haunt the invading earthlings big time. The vignettes, however—many drawn from short stories previously published in magazines—touch upon all sorts of grand subjects, from religion to slavery; if anything, Bradbury, through the prism of science fiction, is far more successful than Ron Fricke in Baraka in encapsulating something close to an entire world, bringing the transformative intelligence of a real artist to the mix, using the material to both directly and poetically comment on matters pertaining to the world in which we all live.

I had also forgotten just how colorful and evocative his prose could be. I mean, right in the first chapter, his description of a so-called "rocket summer" is one to savor:

And then a long wave of warmth crossed the small town. A flooding sea of hot air; it seemed as if someone had left a bakery door open. The heat pulsed among the cottages and bushes and children. The icicles dropped, shattering, to melt. The doors flew open. The windows flew up. The children worked off their wool clothes. The housewives shed their bear disguises. The snow dissolved and showed last summer's green lawns.

★ The Murder of Crows (2008, Janet Cardiff & George Bures Miller), seen (or, rather, heard/experienced) at Park Avenue Armory in New York
If you spend as much time sitting in movie theaters as I do, sitting in a room listening to what is essentially a glorified radio play might require a considerable mental adjustment. At least, that's the way I felt coming upon this new sound installation from Janet Cardiff and George Bures Miller, both of whom have apparently been working on sound installations for most of their creative lives (this new installation of theirs at Park Avenue Armory represents the first time I've heard of either of them). Ultimately, though, I think it was worth making that adjustment in this particular case.

The Murder of Crows is a 29-minute sound installation that is essentially a succession of dream sequences, tracing an arc from gruesome industrial and wartime nightmare to a calm but still unsettled peace. All of these dreams are recounted from a gramophone speaker placed on a table in the middle of the Armory's Wade Thompson Drill Hall; 98 speakers surround this table. That's pretty much it. And yet, through those 98 strategically placed speakers, Cardiff and Miller's many sonic and musical effects richly resound throughout the hall. Industrial noises shudder throughout the whole venue, waves crash throughout all 98 speakers—and yes, crows do seemingly caw throughout the entire space. The dim lighting of the venue adds immensely to the surreal, haunting effect.

What does all of this add up to? A disillusionment with the supposed "progress" of the 20th century, perhaps? Cardiff and Miller's "sound play" keeps things abstract enough that we can take away from this work whatever we want. Mostly, I enjoyed The Murder of Crows simply as a piece of sonic sculpture, imposing enough to be truly immersive in the moment. (It runs until Sept. 9.)
Posted by Kenji Fujishima at 8/06/2012 08:00:00 AM

Even though the TV adaptation of MARTIAN CHRONICLES is on the shoddy side, it has some fine moments, especially in episode one. And it's still better than most sci-fi movies being made. More emphasis on story than on 'special effects'.

Ah I see. For some reason, I didn't think to check to see whether there had been any screen adaptations of The Martian Chronicles out there. And this one has Rock Hudson, Roddy McDowall, Darren McGavin and many others? Interesting...

Thanks for alerting me to it, Andrea!