Rhapsodies in August: Boozy Brunch on a Pier, Followed By a Walk on the High Line

I've heard this word a lot, especially in New York, where a lot of people take the idea of weekend brunches seriously indeed, planning their Saturdays and/or Sundays around this middle-of-the-day cross between breakfast and lunch. Sometimes brunches in New York often include a certain amount of booze to go along with it—preferably something tropical like, say, sangrías or margaritas. And, of course, a brunch in New York ideally ought to have a social component to it.

Despite the fact that I've lived in New York for close to two years now, I have rarely taken part in this classic institution known as the "boozy brunch." So, when a dear grade-school friend of mine from East Brunswick, N.J.—now living in Singapore, currently visiting the United States with his girlfriend—told me he wanted to come visit me in New York on Friday, I figured I'd use this opportunity to not only partake in a "boozy brunch," but to finally visit yet another New York destination that I've only read/heard about previously: the High Line.


Way on the west side of Manhattan, a ship called the Frying Pan is docked. But this is no ordinary ship; this is one of 13 lightships that still exist in the U.S.—lightships being floating lighthouses that were meant to help other ships navigate at nights. After what some believe to be a broken pipe led the ship to sink sometime in the 1980s and spend three years at the bottom of the Chesapeake Bay, it was salvaged and restored to something close to its original appearance. It now rests at Pier 66 in Manhattan—and, most importantly, its bottom floor has been transformed into a popular bar/nightclub, one that many of my friends have visited but I had not.

I was hoping to be able to finally check out the Frying Pan with my two guests on Friday afternoon—but alas, the ship itself was closed for a photo shoot going on at the time. Still, I can't say I feel too disappointed; I ended up getting a chance to have one of those boozy brunches in the bar & grill situated next to the ship on Pier 66. And I mean, look at this view of the Hudson from where we sat! 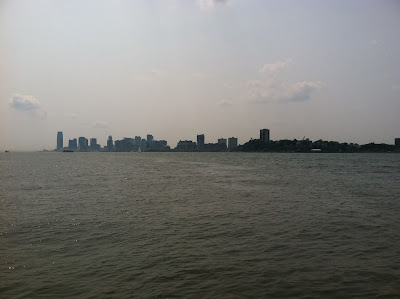 And look at this dessert!


Afterward, I convinced my friends to come visit the High Line. The High Line, for those of you non-New Yorkers who haven't heard about it, is basically a strip of former New York Central Railroad property that was recently converted into a linear park extending from Gansevoort Street to West 30th Street. Again, I keep hearing great things about it, but hadn't checked it out at all until I got the idea to try to get my guests to come with me to visit it on Friday.

Actually, I only ended up walking about four blocks of the 16 or so that constitute the High Line—but hey, even within those four blocks, we were treated to sights like this...


And finally, two last photos of the High Line, just because:

So those were my big non-cultural explorations this past weekend. What's next on my list? Heck, I don't even know that yet. I guess you'll all have to just watch this space, won't you? (If you care to do so, of course.)