Saturday morning on July 28, after having spent a Friday night watching that excellent Sydney Theatre Company production of Uncle Vanya and then going up to a beer garden in Queens to say goodbye to a friend visiting from out-of-town, I decided to pull an all-nighter and try to check out some of the early-morning hours of The Clock (this past weekend was the last in its current Lincoln Center Festival run in which the film ran nonstop from Friday morning to Sunday evening). I got to the David Rubinstein Atrium at around 2 a.m. and waited about an hour and a half on this line: 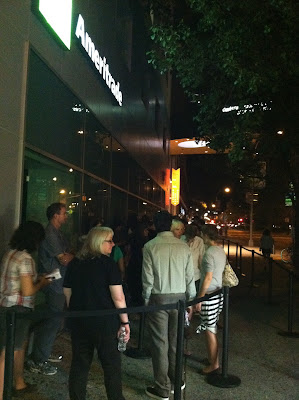 Yes, even at 2 in the morning, I had to wait more than an hour to see Christian Marclay's video timepiece. (And judging by the wait times that were being tweeted over at @LCAtrium in the last few days of this run, the lines had only gotten longer.)

I have to admit, I felt my eyes getting heavy as I neared the Atrium door. A fellow line-waiter theorized that I'd probably feel less tired once I got into air conditioning, as the air that night was quite humid. When I finally got into the theater and sat down, though...well, when you're watching movie characters sleeping, however quick the editing is, it's difficult to completely avoid thoughts of drifting off to sleep yourself. Even then, though, Marclay builds in "alarms"; 4:30 a.m., for instance, brought a panoply of alarm sounds that were enough to perk me up in the moment. (In addition, there was always a guard sitting in the front of the theater to keep an eye on us patrons; the guard took it upon him-/herself to wake up sleeping Clock-watchers. Boy, if only I had a guard doing that whenever I started nodding off at other movie theaters!)

Actually, it's not quite accurate to say that these overnight hours of The Clock featured characters mostly sleeping. More accurately, many movie characters were being roused from slumber by phone calls, knocks on doors and so on. Every so often, of course, there would be the stray character still very much awake and working (Emilio Estevez in Stakeout (1987), for instance, or Dale Cooper in Twin Peaks). And, of course, being that this is the nighttime and that, under cover of darkness, a lot of violent and surreal things tend to happen in movies, so it goes in Marclay's Alternate Cinema World, with its monopoly of horror and sci-fi clips compared to other hours.

Marclay gets into the nocturnal spirit as well; these early-morning hours of The Clock feature some of his strangest and most surreal montages. Clocks feature heavily in some of these dreamlike interludes; at one point, Marclay invokes the famous nightmare sequence of Vertigo (1958) but overlays clock imagery on top of it. In another montage, however, Marclay really lets his freak flag fly when he turns a perfectly normal scene from Gentleman's Agreement (1947) into something more sinister simply by virtue of superimposing it on top of some other clip—a technique that, from what I could see in previous hours, he hadn't used before.

And then 6 a.m. rolls around, rung in alarms a-blazin' by the likes of Groundhog Day (1993), Good Morning, Vietnam (1987) and even Fright Night (1985), with Ethan Hawke and Julie Delpy offering a far quieter counterpoint as they sit on the edge of a fountain enjoying each others' company in Before Sunrise (2004). After some of Marclay's feverish overnight visions, this subsequent two-hour stretch felt strangely peaceful. The six o'clock and seven o'clock hours of The Clock has the feel of one long, drawn-out waking-up session, instilling in a viewer the feeling of a whole world arising from bed and getting ready to start the day in various ways.


My day, however, was just coming to an end at 8 a.m. that morning. After I left the David Rubinstein Atrium, I breathed in the morning air, got myself a breakfast sandwich and some decaffeinated coffee from a nearby Starbucks, went back home and tried to get some sleep (though I pretty much only managed about an hour and a half of solid sleep, at best). All the while, I couldn't help but wonder: Wait, what is that split-second clip from About Schmidt—a blink-and-you-might-miss-it snippet from the same scene Marclay uses at around 5 p.m.—doing at 5 a.m.? Let it not be said that Marclay's playfulness doesn't sometimes get the better him over his self-imposed 24-hour span.


There was one final stretch of The Clock I most definitely wanted to see before this current run came to a close: midnight. Only after my first Clock-watching session about two weeks ago did I start hearing from others that Marclay had come up with something truly impressive to mark that all-important turn to a brand new day—and only then did I realize what a mistake I had made not sticking around until midnight my first night at The Clock, leaving just half an hour before (at the moment, I was thinking more about both having gotten a less-than-ideal amount of sleep the night before and having to go to work the next day). Thankfully, though, Feng Yi Ting, the modern Chinese opera I saw this past Saturday evening, started at 7:30 p.m. and was less than an hour long—thus giving me enough time to get on line to get into the David Rubinstein Atrium in time for midnight at The Clock.

But then, at around 11:15 p.m., the lights suddenly came up, The Clock shut down and we were all told to evacuate the theater! Outside of the left side of the Atrium, we were treated to this: 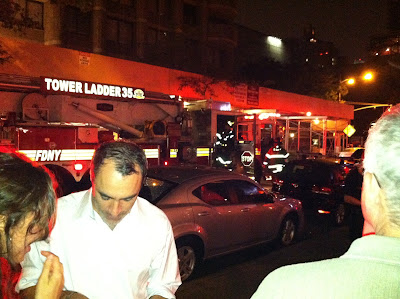 I heard a stray remark about an "electrical fire" being the cause of this interruption. Well, I certainly did smell something burning as I exited the theater, so I had no reason to doubt that remark.

At around 11:30, we were told to go around the corner to the front of the Atrium and wait for further instructions. For a few moments, there was hope that maybe this situation would be resolved in time for the video to resume just before midnight. But as the real-world clock ticked closer to midnight, such a hope slowly drained away, later officially quashed at around 11:50 when some of the volunteers relayed word that police officers would know more in about 10-15 minutes—in other words, after midnight.

At around 12:20 a.m., all of the patrons that had still been in the theater before the alarm went off were allowed back in. Me, however, I just decided to go home.

And thus, with that disappointing miss, ends my current journey with Christian Marclay's The Clock.


Overall, I ended up watching approximately 16 hours of The Clock. Is even seeing more than half of Marclay's video work enough to really make a fully informed judgment? The completist in me says "no." That, however, hasn't stopped many other critics from weighing in, basing their praise and/or condemnation on a mere précis of the whole (New Yorker film critic Richard Brody weighed in just the other day with a pan of Marclay's work based on seeing a mere two hours of the 24). But, as I suggested in above, regardless of what kind of clips Marclay uses, his style doesn't remain consistent through all 24 hours; as is the case with any other normal-length film, the tension rises and falls given the circumstances, and, with an artist as seemingly intuitive as Marclay is, and given how much duration he has given himself with which to work, there are bound to be moments that are more inspired than others—a lot of which one will surely miss by simply focusing on one stretch of time.

So I choose to reserve judgment until I actually see the entirety of The Clock, which, alas, I was unable to do during this just-ended Lincoln Center Festival run. I will say, however, that, through all of the 16 hours I watched, I was consistently entranced and enthralled. For me, the real-time aspect of The Clock is really only a hook for something larger: a period-spanning celebration of the power of motion pictures to access and represent the full range of human experience. Time is certainly a major part of that experience, and at its best, The Clock helps reawaken an awareness of just how much we all are bound—whether reasonably or unduly—by what is essentially just an abstract concept. It's fitting, in that regard, that a frequently recurring image during the daytime hours of Marclay's video is of characters looking down at their wrist-watches—a perfect sum-up of a certain always-on-the-go mindset prevalent in modern society.

Last I heard, the Museum of Modern Art had acquired Marclay's 24-hour video installation, so this may not be the last New Yorkers have heard of The Clock. I, for one, look forward to hopefully catching up with the eight hours I missed this time around. For now, though, the movie is over and time marches on... 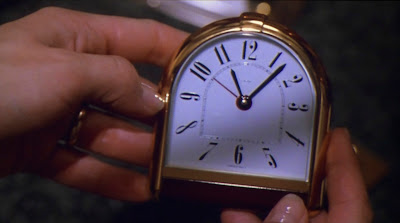