NEW YORK—Last week, cinephiles all over the world waited with baited breath for the unveiling of the latest best-films-of-all-time poll held by the British film magazine Sight & Sound, held every 10 years since 1952. Orson Welles's Citizen Kane (1941) had stood unchallenged as the top vote-getter since 1962 (Vittorio De Sica's Bicycle Thieves (1947) was the victor of the inaugural Sight and Sound poll); would it hold onto its reign at the top this year?

Nope, it turns out. 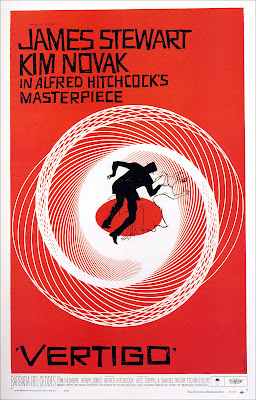 Alfred Hitchcock's Vertigo (1958) became the new champ this year, at least in the critics' poll, leading to all sorts of triumphant hurrahs as well as the usual contingent of dissenters. (In the directors' poll, Yasujiro Ozu's Tokyo Story (1953) emerged No. 1, with Vertigo placing seventh.)

As everyone was trying to weigh in on this supposed seismic shift in critical opinion, The House Next Door, the blog offshoot of Slant Magazine—both of which feature my own pieces of film criticism—began a new series in which it offered up the ballots of those contributors who had not been asked to participate in the Sight & Sound poll. My own ballot went up yesterday, for those who are curious as to what I consider my personal Top 10. It's not entirely the straight-from-my-gut lineup that my introduction suggests; I did engage in some contemplation over my choices. But all of the films I list have had some kind of profound effect on me in some way, as I tried to describe in each entry. So I'm happy with this list (though, of course, I'm hardly bound by this particular personal canon, reserving the right to alter it at the flip of a switch if I felt like it).

You know who else was happy with this list? A certain legendary film critic who, among other things, I met last year at a festival bearing his name, if this tweet from him is any indication...
Posted by Kenji Fujishima at 8/06/2012 03:30:00 PM

Email ThisBlogThis!Share to TwitterShare to FacebookShare to Pinterest
Labels: my favorite films of all time, self-promotion, Sight and Sound, The House Next Door

There are two films I have not seen on your list, and another two that I wouldn't place on my own top ten though I understand their strengths, but on the strength of your number one film, I think this is one of the best top ten lists I've read.

I first watched Playtime in an architecture class at university and I was blown away by it, both by the meticulous construction and by the humanist approach you refer to. It's right up there for me along with the likes of Bicycle Thieves and Persona.

If you love VERTIGO, you probably love L'APPARTEMENT too.

Amir: Thanks! Did you get to see Playtime that first time on a 70mm print? Because if you haven't gotten a chance to see it projected theatrically in a 70mm print, it's a must! The sheer amount of detail Tati packed into each frame ensures you'll find new stuff in it each time.

Andrea: I haven't seen L'appartement at all; I'll keep it in mind. I have seen Wicker Park, though; it's not bad (at the very least, I think I remember preferring it over director Paul McGuigan's subsequent, hollow Tarantino riff Lucky Number Slevin).

Unfortunately, no. I've been waiting to see it projected like that but haven't got the chance yet. That's the only time I've seen it on the big screen and ensuing TV viewings haven't done it justice. One day, hopefully...