AUSTIN, TEXAS—Well, that was fast! 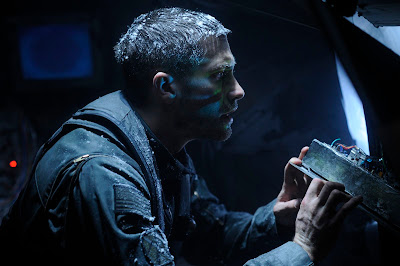 This year's Opening Night film for South by Southwest was Duncan Jones's second feature Source Code. I was able to get in to a packed screening at the Paramount Theatre last night, and this morning I wrote up a fairly brief review of it for The House Next Door. Not much more than an hour later...here it is, posted online, for all the world to see! Because I tried to avoid spoilers or spoiler alerts altogether, I couldn't get into nearly as much depth as to why I find the last five minutes of the film problematic as I would have wanted; maybe I'll get into it in a later post. The rest of the film, thankfully, is solid, intelligent entertainment—worthy, for the most part, of the enthusiastic applause it received at its world premiere last night.

I also saw Saw director James Wan's latest horror film Insidious at midnight at the Alamo Drafthouse Ritz—my first time at the fabled movie theater (they serve food there, with waiters and all!). I'll perhaps get to that film in a later dispatch. Short version: It's a skillfully made, effective scare machine—no more, no less. Oh, and it's not particularly gory either...which, considering the filmmakers' pedigree (Saw screenwriter Leigh Whannell also penned this script, and even gives himself a comic-relief supporting role), is an interesting stylistic departure, but may lead critics to overrate this film just a tad.

In the meantime, South by Southwest rolls along. Films I hope to get to today: a couple of in-competition documentaries, plus James Gunn's Super, which I hear is supposed to be yet another goof on the superhero genre. Hopefully it's a better one than Kick-Ass.
Posted by Kenji Fujishima at 3/12/2011 04:45:00 PM