On Character Motivations in Movies

BROOKLYN, N.Y.—The line between opaque character motivations and merely underimagined characters can be a fine one indeed.

Sometimes in a drama, you might come across an action that a given character undertakes that strikes you as either inconsistent with that character's previous behavior, or simply unclear as to his/her motivation behind said action. Do you immediately chalk up such confusion on the viewer's part to bad screenwriting—a possible failure on the screenwriter's part to fully imagine these characters? Or are you, like me, more often than not inclined to give that particular screenplay the benefit of the doubt?

I've been thinking about this issue a bit more than usual recently, inspired by two films I've seen: Béla Tarr's Sátántangó (1994) and Radu Muntean's Tuesday, After Christmas (2010). As far as subject matter goes, these two films are worlds apart; stylistically, however, they are startlingly similar, with both directors committed to extremely long takes and a starkly realistic (if not downright depressive, at least in Tarr's case) atmosphere in dissecting the physical and emotional environments they inhabit. In aiming for this fly-on-the-wall approach, however, they also both end up taking a more detached perspective on the human behavior they portray, not always bothering to make clear the motivations behind the behavior. 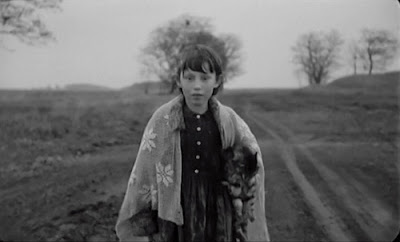 One of the most infamous sequences in Sátántangó involves a young girl (Erika Bók) who, finding herself bored while waiting around for her brother, hides in an empty space away from the rain, picks up a pet cat and proceeds to torture and eventually kill it. (This turns out, believe it or not, to be not the worst thing she does in her section of the film.) Why does she commit this appalling act, which Tarr, of course, shoots in unnervingly prolonged takes without any cutaways to spare us the worst? Is it just an indication of how bored she is? Does she truly believe she's just playing around with it? Is she that determined to exercise her power over something—a power that she perhaps is otherwise unable to exercise in her regular life? Or is her attitude toward this poor creature a product of the loveless environment in which she lives: an isolated, failed farm collective in Hungary in which most of the inhabitants exhibit variations of boredom, selfishness and general spiritual bankruptcy? Tarr doesn't bother to give us any clear indications of the reasons behind her actions; he—with the invaluable assistance of cinematographer Gábor Medvigy—simply looks on impassively.

Or take the pivotal moment in Tuesday, After Christmas when Paul (Mimi Branescu) finally decides, a couple days before Christmas, to fess up to his wife Adriana (Mirela Oprisor) about the affair he's been carrying on with their daughter's dentist, Raluca (Maria Popistasu). Following in Tarr's footsteps, Muntean shoots both the build-up to this bombshell moment and the resulting emotional fall-out in one single take; just as there is now nowhere for Paul to hide from Adriana's knife-edged glare, Muntean and cinematographer Tudor Lucaciu don't give us the relief of edits or changes in camera angles to shortchange the emotional brutality of the moment. And yet, there may still be lingering questions regarding that moment in your mind: Why does he choose that day, of all days, to let out his secret? What makes him decide to let that secret out in the first place? (He never vocalizes his thoughts, and Muntean never lets us in on them through any sort of voiceover.) Other than that one tension-filled scene at the dentist's office—in which, by happenstance, his wife and his mistress find themselves in the same room, his wife knowing nothing about his relationship with Raluca in the moment—he seems to have his double life under reasonable control. It almost comes off as an implicit bit of self-awareness on Muntean's part that, throughout Adriana's meltdown in that scene, the one question she never bothers to ask her philandering husband is "Why?"

Why, indeed. Neither director seems all that interested in providing explanations for behavior so much as just showing us that behavior and leaving it to audience members to come up with his/her own explanations, based on the evidence presented onscreen. Some might find this a frustrating approach and conclude that a screenplay simply hasn't been fully imagined enough by all parties involved. But is it quite that simple?

A lot of the mainstream films and television dramas I've seen over the years seem to have a marked preference for tidy explanations for the ways characters behave; legal dramas and police procedurals like the many Law and Order and CSI series, especially, probably wouldn't be so popular if they didn't satisfy an audience's desire for closure, psychological or otherwise, in their mysteries. But are motivations ever that easy to parse in real life? Even after New York Representative Anthony Weiner finally admitted that he sent those explicit photos to other women through Twitter that accidentally found their way into the public eye, people are still discussing the whys of this situation, such as: Why do people in positions of power like Weiner—or like Bill Clinton as president of the United States in the 1990s—feel this compulsion to risk wrecking their reputations and home lives? There may be lots of speculation among "experts" in the media, but usually that's all they amount to: lots of speculation, rarely a consensus explanation.

Of course, the Anthony Weiner story (which seems to get both more catastrophic and less interesting as it wears on) is a real-life event; Sátántangó and Tuesday, After Christmas are wholly fictional constructs—both imbued with the patina of cold, hard reality, but fictional nevertheless. It's probably natural for all of us to approach works of fiction with different expectations than we do works of non-fiction.

I guess, as is often the case with a complex issue like this, one's stance on this matter will depend on a given film. For the most part, I'm willing to go along with the elliptical characterizations in Sátántangó and Tuesday, After Christmas because I do feel that each filmmaker sketches in just enough detail, whether character-based, plot-based or environment-based, for us to solidly draw our own conclusions as to, say, why the girl tortures the cat, or why Paul cheats on his wife for the younger female dentist. 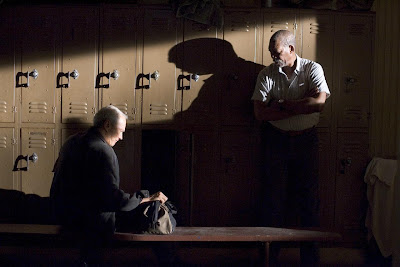 Sometimes, though...well, I suppose my ability to suspend disbelief can go only so far in some cases. For instance, personally (and I seem to be in a minority on this), I've always had trouble reconciling the decision Maggie, the boxer played by Hilary Swank in Clint Eastwood's Million Dollar Baby (2004), makes by asking her beloved mentor Frankie (Eastwood) to let her die after an accident during a crucial match leaves her paralyzed. This woman, full of life and pluck, so driven that she's willing to cast off her extravagantly ungrateful family to realize her dreams, suddenly decides she would rather give up on life than do what we've seen her do throughout the rest of the film: fight to live like she fought to become a boxing champion? Yes yes, I know what screenwriter Paul Haggis has her say in the film to justify this twist: that she feels she has accomplished all that she has set out to do in this world, and would prefer to depart on top, now that she's physically unable to box anymore. Nevertheless, for me anyway, the decision doesn't jibe with the way the character's been written and acted up to that point—and if you don't buy Maggie's decision, then that finale can't have the same devastating emotional impact that Eastwood and Haggis surely intend, however much one is willing to accept that decision at face value. (But then, I've always found Maggie to be a rather thinly written role, however beautifully performed by Swank. I don't really buy her motivation because I don't really buy her as a fully fleshed-out character; to me, she's a mere archetypal vehicle to justify Frankie's own casting off of his emotional demons throughout the film.)

Of course, should such matters of character motivations make a big difference in the long run? Often, one will hear people poke such psychological holes at, say, your standard Hollywood action extravaganza, but such niggles will usually be dismissed with, "If he/she didn't act this way, there wouldn't be a movie." Are dramas somehow more worthy of such scrutiny? Should we necessarily hold a drama such as Million Dollar Baby to a different standard of dramatic logic? 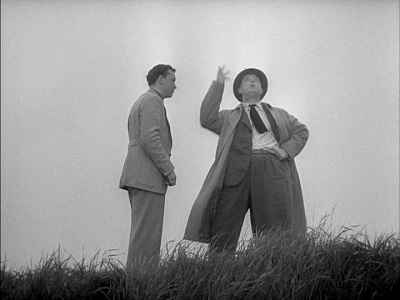 Jean Renoir famously played a character in his own film The Rules of the Game (1939) that uttered, "The awful thing about life is this: Everybody has his reasons." Some of cinema's greatest artists—Renoir himself, Robert Altman, Eric Rohmer (whose marvelous 1986 film Le Rayon Vert I've just seen, by the way, and which I hope to write about at length eventually), Yasujiro Ozu, among other examples—have used that dictum not as an excuse to try to connect the psychological dots, so to speak, but to, in their own distinct ways, present characters' behavior and the circumstances surrounding their actions, and trust us to be able to intuit the motivations driving that behavior.

When it comes to the mysteries of human nature, maybe ultimately the most honest approach for an artist is to merely stand back and observe people in all their messy complexities. Whether it all adds up depends on the individual viewer, I suppose. But to try to explain it all would risk reducing our multifaceted human species into a series of easy-to-package psychological profiles. The best art ought to aspire to something more than that.
Posted by Kenji Fujishima at 6/15/2011 09:00:00 AM