BROOKLYN, N.Y.—The list of films I saw this past week might have been longer had Saturday not been so beautiful a day that even thinking about seeing four films that day, as I had initially planned, filled me with a kind of existential despair. So, impulsively, I decided to nix the last two films I had planned to watch and went up to celebrate a friend's birthday at the Dave & Buster's in the Palisades Center Mall in West Nyack, N.Y.

Boy, that mall is huge! And flashy. See? 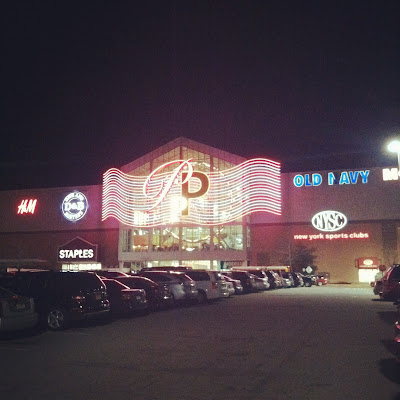 Plus, there's a Ferris wheel in it! 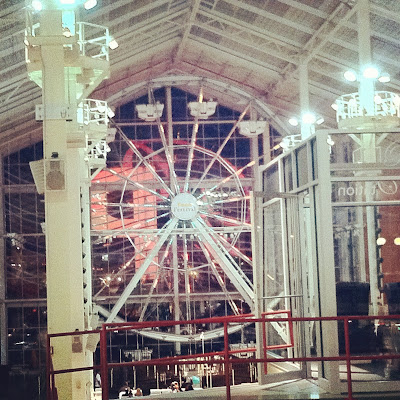 Thankfully, there were no telekinetic people lurking in the mall a la Robin Sandza from Brian De Palma's The Fury, threatening to send that wheel flying into oblivion.

As ever in my life these days, I'm not so much trying to balance work and play as trying to strike a balance between the different kinds of play at my disposal.

Films
Haywire (2011, Steven Soderbergh), seen at AMC Loews 34th Street 14 in New York
Maybe I went into this in the wrong frame of mind? Going into Steven Soderbergh's previous film Contagion, I was prepared enough for his by-now-typical aloofness that I found the experience of watching it strangely comforting, for all the disease, selfishness and industrial-toned imagery on display. Perhaps, then, I should have expected that he'd try something similarly cold and theoretical in what, in other hands, might have made for an overblown Hollywood action extravaganza. Soderbergh seems to deliberately suck the thrill out of seeing MMA star Gina Carano kick righteous ass, playing everything for drab "realism" as if he felt that was the only way he could approach such a banal script (written by Lem Dobbs). And yet, every once in a while, his detached approach yields disturbances—shots of Mallory's father (Bill Paxton) staring with a vaguely stunned expression at her daughter beating up on someone; overhead shots of duplicitous Kenneth (Ewan McGregor) panicking in the midst of certain doom—that puncture the sleek surface, adding interesting complications to the straightforward genre material, none of which Soderbergh or Dobbs bother to explore in any depth. Mostly, Haywire is as crushing in its general sense of indifference as Carano's fighting abilities are to her opponents. As for Carano: she doesn't set the world on fire as an actress, but she is indubitably an impressive physical performer and a suitably memorable presence. Maybe next time around, she'll have a more emotionally invested filmmaker directing her?

★ Come Back, Africa (1959, Lionel Rogosin), seen at Film Forum in New York
A valuable historical document of South Africa in the age of apartheid. It's a bit less successful as drama, and its final plot turn makes an unconvincing sudden lurch toward melodrama. But there are still some fascinating bits of documentary footage here (Rogosin shot this covertly on location using nonprofessional actors), and there is one keeper of a scene involving a bunch of black Africans arguing over politics and philosophy that interrupts the heady conversation with two musical numbers sung by legendary South African singer Miriam Makeba. (Seeing this reminds me: I still need to see Rogosin's previous film, the New York-set semi-documentary On the Bowery (1957).)

★ Rosetta (1999, Jean-Pierre & Luc Dardenne), seen at IFC Center in New York
This is the one post-La Promesse fiction feature from these Belgian filmmaking siblings that I had not seen; now that I've seen it (as part of this retrospective of the Dardennes' work), for me it places at or near the peak of their achievements (their subsequent feature, The Son (2002), runs it close). Unlike many other recent American indie films (Ballast and Frozen River are two films that immediately come to my mind) that are content merely to rub our faces in the misery of protagonists of Rosetta's kind—working-class, barely scraping by, struggling to make ends meet—Rosetta, while hardly stinting on depicting the unpleasant particulars of its main character's existence (constantly looking for a job, trying to support herself and her alcoholic mother), emphasizes her struggle to maintain her dignity and self-respect in spite of it all. The whole thing culminates in an astonishing 10-minute stretch that vaults the Dardennes' astonishingly physical directorial style into the realm of the spiritual; Rosetta's effortful progress with a gas tank suggests a modern variant of Jesus Christ's stations of the cross, trying to maintain composure even as Rosetta/Christ bears mockery all around her/him. Its destination is humane, transcendent, hard-won and genuinely inspiring without a hint of sentimentality. Why this wonderful film has still not made it to Region 1 DVD is beyond me.

"David Cronenberg," all films directed by David Cronenberg and seen at Museum of the Moving Image in Queens, N.Y.
Transfer (1966)
From the Drain (1967)
★ They Came from Within (1975)
They Came from Within—which is often referred to by its original title, Shivers—was David Cronenberg's first feature, and already he was making his obsessions with sexual body horrors apparent in ways that are as deliriously visceral as they are disturbingly clinical. The scenario—an apartment building in Montreal becomes Ground Zero for an infestation of parasites that turn their victims into sex-crazed "zombies"—is merely a springboard for Cronenberg to play around with all sorts of variations on the idea of sex as being akin to death. (The parasite is given an explicitly phallic look to it, and the ways in which they enter and exit hosts suggest all sorts of sexualized penetration—emphasized most memorably when one of these penis-shaped creatures propel their way into Barbara Steele's vagina while she's taking a bath.) Later films of his have arguably explored similar themes in a less overtly hysterical and reactionary manner; still, there are sparks of invigorating transgression here that horrify and exhilarate in the moment.

Before the feature, Museum of the Moving Image screened a couple of Cronenberg's 16mm student shorts. Both of them are rough around the edges and mostly pretty negligible, but they do suggest some of Cronenberg's later thematic interests. Transfer—with its goofy take on psychoanalysis as a patient tracks down his analyst, who is hiding away from the world—is interesting to see in light of his most recent film, A Dangerous Method, while From the Drain—with its vaguely Samuel Beckett-ish scenario of two characters with barely hinted-at traumatic backstories conversing while sitting in a bathtub—climaxes in a bout of bloodletting that could be seen as an apt curtain-raiser for They Came from Within.


Music
★ Bilingual (1996, Pet Shop Boys)
Nightlife (1999, Pet Shop Boys)
★ Release (2002, Pet Shop Boys)
★ Fundamental (2006, Pet Shop Boys)
The songs in Release suggest this British pop duo settling down into something approaching domesticity, with its surfeit of lyrical ballads and general de-emphasis on their usual gay iconography. It may also be my second favorite Pet Shop Boys album after Behaviour; I guess that's a testament to just how gorgeous some of those ballads are. The whole album is pretty lovely, really—especially "The Night I Fell in Love," the only cut that explicitly deals with homosexuality.

"Sounds Re-Imagined: John Cage at 100":
★ Program I, seen at Peter Jay Sharp Theater at The Juilliard School in New York
The Juilliard New Music Ensemble is celebrating the 100th birthday of revolutionary 20th-century composer John Cage with this week-long series of free concerts—and being that they were free (always a good thing for this 20-something New Yorker trying to save as much dough as possible!), I decided I might as well take some chances, having not heard Cage's music at all but knowing his reputation, and check out some of the programs. (I have a ticket for one other program tonight and will most likely try to get into another, sold-out performance later in the week).

For those who haven't heard of John Cage (no, folks, not the Mortal Kombat character) or his music, the best way I can describe his impact is this: He changed the way many people thought of "music," challenging traditional notions of what music could be and where it could be found. If composers like Arnold Schoenberg and the rest of his Second Viennese School peers were exploding conventional notions of tonality in the early part of the 20th century with their twelve-tone method and other innovations, Cage dared to obliterate tones altogether. I mean, who before Cage had ever thought of "composing" a piece like 4'33"—in which a pianist basically sits down and does nothing for four minutes and 33 seconds, opening up the possibility that whatever noises manifest themselves within that block of time could be the actual "music"? Or what about Imaginary Landscape No. 4, one of the pieces performed at the opening Friday night program, a work scored for twelve radios with volumes and frequencies adjusted according to Cage's instructions? No notes, simply whatever came on these radios whenever Cage indicated.

Such an openness to the music inherent in our everyday lives led Cage to eventually embrace the idea of "chance music"—music more dependent on the inspiration of performers than on the composer setting out fixed notes on a page. That's not the same thing as improvisation, however: Cage offered guidelines in these "chance" compositions but expected the performers to use them as a guide to fashion a composition of his/her own and rehearse it before a performance rather than come up with one on the spot. A good example of this is Theatre Piece (1960), also part of Friday night's program, and a work whose "score" consisted mostly of instructions to performers based on given nouns and/or verbs as well as numbers indicating volume levels and so on. Thus, each performance of such a piece could conceivably be different. The possibilities are endless!

Not all of Cage's innovations were quite so radical; sometimes he was content to simply be playful. Witness yet another work of his on Friday night's program Living Room Music, a brief 1940 four-movement piece featuring performers making rhythmic music out of kitchen utensil, books and so on. Apparently Cage quietly anticipated Stomp 50 years before that percussive musical troupe was even formed!

There's a lot more to say about John Cage's singular art, at least on the basis of both what I've read about him and on this one performance. So for now, I will just say that I found Friday night's concert to be a thrilling, sometimes funny and altogether revelatory experience. I'm eager to hear more of what came out of Cage's puckish, mischievous and outside-the-box musical mind.

For now...well, here's proof, via his 1948 piano piece In a Landscape, that Cage was also capable of more traditionally harmonic music of great beauty: