For the Love of Film III: Alfred Hitchcock's Spy Anti-Thriller

BROOKLYN, N.Y.—[This is my contribution to the currently ongoing third annual For the Love of Film blogathon hosted by Self-Styled Siren, Ferdy on Films and This Island Rod. You can read more about what this year's blogathon is funding—something Alfred Hitchcock-related; thus this post—here and donate to the National Film Preservation Foundation here.] 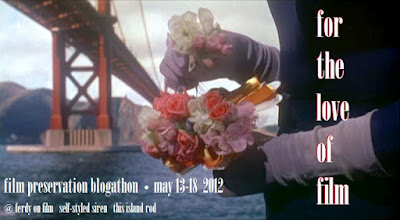 In trying to figure out what I’d contribute for this year’s For the Love of Film blogathon, I knew I wanted to do something Hitchcock-related—but what? So much ink has been spilled on his behalf over the years that, unless one felt confident that one had a fresh angle to take, it would be overkill to write the umpteenth piece on something by-now-canonical like Notorious, Rear Window, Vertigo, Psycho or The Birds. So I decided to see if I could perhaps come up with something to say about a less widely celebrated film by the Master of Suspense. Immediately, I thought of… 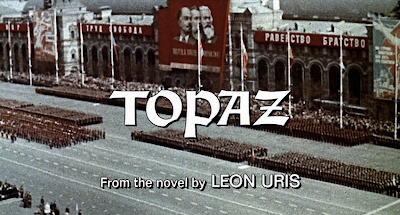 Though some of his late films—Marnie (1964) and his swan song Family Plot (1976)—have been critically rehabilitated since receiving indifferent or cold receptions upon their initial theatrical releases, his 1969 film Topaz remains a problem child for even the most diehard of Hitchcockians, especially coming on the heels of his even less fondly remembered 1966 thriller Torn Curtain. Personally, outside of that one agonizingly drawn-out murder sequence midway through that film (a scene Ang Lee may have had in mind when he staged a similar death scene in Lust, Caution), I can’t even summon up much enthusiasm for Torn Curtain. Topaz, on the other hand…

The disappointing thing about Torn Curtain is that, up until that murder scene, Hitchcock is able to sustain a tone of moral inquiry that lends initial intrigue to missile scientist Michael Armstrong’s mysterious decision to defect to East Germany. What are his real motives for doing so, and even if we knew those motives, would they turn out to be worth all the trouble he subjects himself to? That brutal murder sequence brings those hovering questions home in a deeply sobering way; unfortunately, after that point, the rest of the film becomes a standard chase movie, with Hitchcock showing the barest minimum of interest in the narrative. 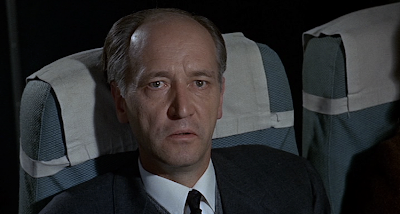 Topaz, by comparison, shows Hitchcock in fuller control of his material—material that, like Torn Curtain, deals with espionage, politics and morality. The film’s form, however, is more inventive than the far more straightforward narrative of its predecessor. Screenwriter Samuel A. Taylor’s adaptation of Leon Uris’s bestseller takes a vignette-like structure in depicting this Cold War world of intrigue and deception; there is a central character running through the plot—French intelligence officer André Deveraux (Frederick Stafford)—but the screenplay isn’t shy about straying from Deveraux in order to follow other characters, like French intelligence agent Philippe Dubois (Roscoe Lee Browne) and son-in-law Francois Picard (Michel Subor), for lengthy periods of time. Heck, the whole film begins not with Deveraux, but with Boris Kusenov (Per-Axel Arosenius), a Russian who defects to the U.S. with his wife and daughter. (Taylor’s screenplay, for all its emphasis on plot complications, isn’t above the occasional colorful character detail, as in the way it makes Kusenov a bit of a hardass, especially when he castigates an American intelligence agent after he’s extracted from Russian clutches by saying “That’s not the way I would have done it.”)

But the film’s cold-sober demeanor isn’t just a matter of the script’s exploratory narrative structure. A sense of omniscient detachment hangs over the film; Hitchcock, for the most part, seems more interested in the bigger picture than in the individual human dramas that play out. Admittedly, some of the dispassionate feeling the film inspires may have as much to do with the uneven performances of its cast than in anything Hitchcock does as a director; it must be said, for example, that, as Deveraux, Frederick Stafford is a black hole as far as charisma goes, making it hard to get too worked up in whatever happens to him. And yet, the stiffness of some of the acting is paradoxically a boon to the film's cumulative effect as something of a deliberate anti-thriller, taking the romance out of these spy games the way that one brutal death scene in Torn Curtain gave lie to the usual quick and easy movie murders. (If anything, casting a major star on the order of a Cary Grant or a Jimmy Stewart would most likely have detracted from that effect.) Thus, even scenes where characters reveal fancy new gadgets—the kind of sequence that would be a source of near-fetishized wonderment in a James Bond picture—are treated fairly matter-of-factly. There’s nothing “cool” about them in Topaz; these are just part of the job. 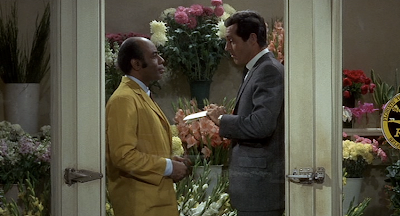 None of that is intended to suggest that the generally calm and collected Topaz is itself bereft of cinematic pleasures. The film has its share of virtuoso setpieces—most notably a lengthy sequence in which Hitchcock methodically details Philippe Dubois’s attempt to steal important missile documents from Cuban strongman Rico Parra (John Vernon). As is the case with the equally masterful opening sequence involving three KGB agents tailing Kusenov’s family, this section is mostly wordless: We’re not allowed to overhear Dubois’s dialogue exchanges with his Cuban contact, forcing both Deveraux, and us in the audience, to track his progress simply through body language and gestures. (Hitchcock primes us for this stylistic approach when, in a greenhouse, he has Deveraux deliver a big batch of inaudible exposition to Dubois behind a closed door.)

Even some of the dialogue scenes in which speech is heard are somewhat enlivened by Hitchcock’s direction of them. Note, for instance, this first encounter with Deveraux and fellow spy/adulterous love interest Juanita de Cordoba (Karin Dor), in which these two extreme close-ups of the characters in their romantic bubble... 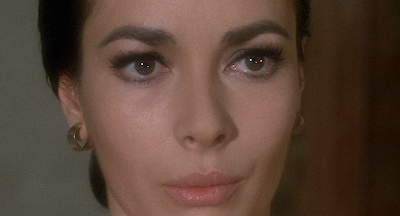 ...opens up when Deveraux moves away from the camera, the camera still in the same position, when he’s forced to discuss job-related matters with Juanita. 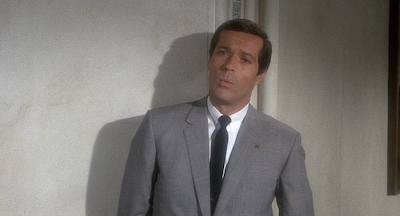 And of course, there’s this shot, arguably the most famous in Topaz, of Juanita’s death at the hands of Rico after he discovers her treachery to the Cuban cause: 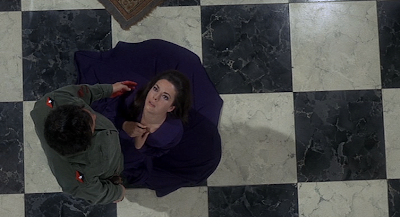 As Juanita falls to her death, her dark-purple dress extends from under her as if blood was spreading around her. Eventually, we see her actual blood marking the scene: 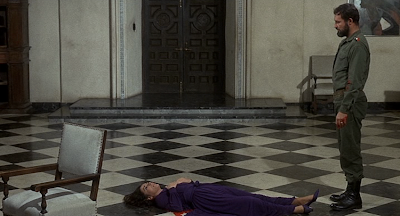 Topaz ends on a note of resignation that may, in the moment, strike you as unduly rushed and disappointing. It wasn’t the ending originally planned; after the original, more dramatic but similarly bleak ending tested negatively with early audiences, Universal forced Hitchcock to shoot a different one. Nevertheless, to my mind, coming on the heels of a purposefully deglamorized take on the spy-movie genre, the ending acquires its own fitting perfection. Despite the jaunty Maurice Jarre score underscoring its final moments—the same bombastic cue that plays under the film's opening credits—Topaz ends with a shrug rather than a sense of triumph. It may be a triumph for the world at large, but for these characters personally, it's merely the end of a job—"the end of Topaz," as Deveraux says in a bit of winking self-reflexivity, being that that is the film's own final line of dialogue—with all the baggage that entails. 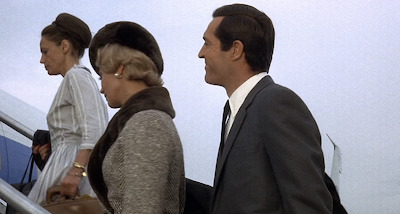 Now, I'm not making the case here that Topaz is some undervalued masterpiece that deserves to be considered on the same exalted level as, say, Vertigo (still my favorite Hitchcock film, and an all-time favorite). It's a wildly uneven, deeply flawed film, afflicted at times with slack pacing and indifferent acting. But if you are able to get on its near-defiantly un-sensational wavelength, there is still much to admire and even a fair amount to truly enjoy. Of all Hitchcock's late films, this one strikes me as arguably the most deserving of reassessment.

Email ThisBlogThis!Share to TwitterShare to FacebookShare to Pinterest
Labels: Alfred Hitchcock, blogathons, films seen at home, For the Love of Film

Interesting choice. I must admit that I have seen this film three times and can't remember a THING about it, although glimmerings are coming back thanks to your description. Maybe I'll try one more time....

Heh well I mean, if you've seen it three times already and it still hasn't made much of an impression on you, I would guess giving it a fourth look won't turn you around. Still, I'm glad that you got something out of my piece!

Well, I haven't seen this film ANY times, but your argument persuades me that it might be worth a look - thanks!