Summoning Up My Inner Schwartz in Writing About Spaceballs 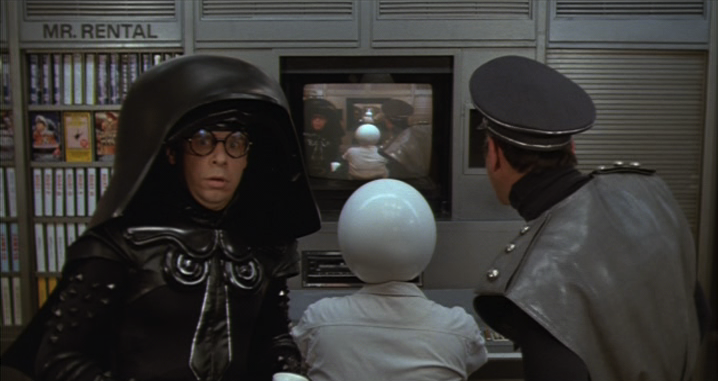 My second contribution to The House Next Door's "Summer of '87" series is a look back at Mel Brooks's sci-fi/consumerist spoof Spaceballs—never a film I held in nearly the same esteem as a lot of my friends, and often considered one of Brooks's lesser comedies, but one that I found myself enjoying more than I remember doing in previous viewings. Maybe I was just in the mood for some dumb laughs that night—though, as I try to argue in my piece, not all of the jokes are dumb; some of them, in fact, do have a considerable edge to them.

You can read more here.

P.S. Just for kicks: Hey, all you fellow Generation Y-ers, do you all remember that ol' blog-hosting site Xanga? I had one of those things during my freshman year of college. It was during that year that I finally saw Spaceballs uncut and uncensored for the first time. Here's what I wrote then, for your collective amusement:

...Spaceballs was playin' in the Lounge on the big screen TV tonight. It was good to watch most of it unedited for the first time—but i still think a lot of it is just plain stupid. Frankly, though i enjoyed the musical of The Producers, i've never been a big Mel Brooks fan. The movie of The Producers was all right (more strange than hilarious to me, although the musical numbers were the best), and Young Frankenstein is his best spoof—but his comic timing is sometimes faulty, and seriously, he must take us for dumbasses if all he's done after Producers and The Twelve Chairs are dumb no-brainer spoofs, some mildly funnier than others. I dunno...i just prefer the ZAZ spoofs. You know—Airplane!, Top Secret!, and the Naked Gun series, and let's not forget Hot Shots! Part Deux...


Oh, I was so young then! But the fact that my 26-year-old self enjoyed Spaceballs far more than my 18-year-old self did...well, I'll let you all parse the implications of that yourselves. (That said, my take on the original 1968 Producers notwithstanding, I would say my views on Mel Brooks and ZAZ haven't changed all that much.)