EAST BRUNSWICK, N.J.—A funny thing has happened in my moviegoing habits recently: I've begun to gravitate more toward revival film screenings, and have started to not make it as much of a priority to keep up with the new releases as I used to.

I guess I have both Jean-Luc Godard and Jia Zhang-ke to thank, or blame, for this. As I wrote here, seeing his great 1964 film Band of Outsiders at the IFC Center was a totally unexpected revelation; sure, I had always loved the film for its charm, playfulness and sense of melancholy, but I had never been deeply moved by the film—especially by the way Godard gives near-mythic size to his utterly ordinary trio of characters—until I saw it projected theatrically. And then the Museum of Modern Art programmed its Jia Zhang-ke retrospective this month, and I experienced two more revelations at screenings of The World (2004) and Platform (2000); I didn't warm to either film on DVD, but somehow I connected with them more readily on a big screen.

In the cases of the Jia films, perhaps familiarity played a part in my more enthusiastic second reactions to those two. Issues that might have bugged me the first time—the off-putting emotional detachment of Platform, the world-as-theme-park metaphor dwarfing human drama in The World—either bothered me less or fell completely apart. 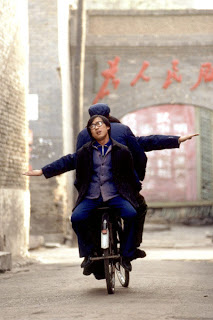 So while Platform still feels somewhat alienating in its distance, what felt like mere dullness on my 42" LCD TV at home came off on the comparably larger dimensions of a movie screen like a profound sense of aimless historical drift, in which 10 years of Chinese modernization, from the late '70s to the early '80s, gradually lead up to a finale which vividly illustrates that familiar saying, "The more things change, the more things stay the same." Certainly, I didn't feel a chill in my spine on TV that I did in the theater with the film's final shot, which, thanks to an impeccably placed musical crescendo on the soundtrack that's almost Pendereckian in impact, powerfully exudes a feeling of dreams dashed, of lives mired in a dead end that the characters barely seem to perceive. 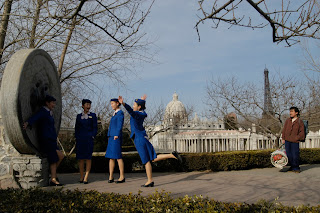 As for The World: Jia still relies a bit too much on his grand metaphor to carry the film forward, but somehow this didn't bother me quite as much this time around. (Having Jia and star Zhao Tao introduce the film certainly didn't hurt the experience, as I briefly documented here.) In fact, I found myself more engaged with the human dramas playing out among the backstage characters, and more intrigued by the film's implications about how globalization and modernization paradoxically cuts people off from the wider world—how, to put it more simply, the world seems to get smaller even as its boundaries expand. It also seemed a funnier movie than I had remembered it on DVD, with Jia finding innumerable fresh and often hilarious ways to stage and frame his characters amidst these world-landmark reproductions. (Maybe the presence of an audience heartily laughing at some of Jia's funnier visual gags enhanced this impression.) Even its much-disputed tragic ending made some kind of instinctive sense to me (though I'm not sure I can really explain why except to say that there is a line of dialogue early in the film that anticipates it).

How could it be that seeing these two films in a theater made them play that much more vividly than seeing them on home video? Maybe only now am I truly realizing just how important high-resolution theatrical projection can be not only for the sake of image detail, but for bringing us closer, physically and spiritually, to characters and ideas. That can especially be important in a Jia film like Platform, in which the director deliberately makes us aware of the (historical) distance between us and his characters by generally eschewing close-ups and choosing medium or wide shots to tell his story. Granted, that feeling of being kept at arm's length might come across in a home-theater set-up—but Jia pays as much attention to detail in his frames as he does to the length of his takes, and the inherent minimization of detail in even the most immaculate set-up is thus automatically doing an injustice to at least one facet of his art.

That, and just seeing a film projected big can be an overwhelming feeling in an of itself, especially with the widest of aspect ratios. This I especially felt with The World—though perhaps a part of that was because I was seated in the second row of the theater. (At theaters like Film Forum and MoMA, I have started to make it a habit to sit as close to the screen as possible—especially at Film Forum, where the screens are relatively small compared to the standard multiplex screen.)

There is another reason that I've begun to crave seeing more older movies in theaters. Simply put: I haven't been able to find enough time to be able to make much progress with my Netflix queue. These past few weekends, I always seem to find myself wrapped up in other practical matters I need to attend to (income taxes being one of them); also, my work schedule makes it so that I pretty much have no time to sit through feature films on DVD in the evenings. All in all, I think it's been almost a month since I last watched a DVD from Netflix. A month! And because I'm often in New York at least one day of my weekends in order to catch up on theatrical releases, I find I can only fit in one DVD a week, if that.

For a cinephile as hungry as I am, that's akin to starvation!

Taking all that into consideration, then: You know what I did this past weekend? Instead of seeing new releases like Bong Joon-ho's Mother, Marco Bellocchio's Vincere or Noah Baumbach's Greenberg, I instead decided to check out Fei Mu's 1948 classic Spring in a Small Town and Joseph Losey's 1951 noir The Prowler, neither of which I had ever seen. They are both wonderful films—the Fei full of beautiful emotional complexities, the Losey rich in human complexities of a far darker, seedier kind—and the feeling of satisfaction at having these first experiences at a theater was, I think, worth the ticket price. (I hope to say more about those films than that, but I'll do so at a later date.)

My reasoning is: Hell, if I'm spending so much time and energy trying to catch up with the latest in art-house theatrical releases, why not go all the way and take in the latest art-house revivals as well? Even with stuff that is technically available on DVD (though admittedly, The Prowler is not)? That's the way the directors intended for their films to be seen anyway, am I right?

Of course, the downside is that I am falling way behind in new releases. Lourdes, The Art of the Steal, the 1980 and '83 installments of the Red Riding trilogy (the '74 episode is gripping and devastating stuff, I must say), Green Zone, the aforementioned Bong, Bellocchio and Baumbach films—all of these as yet unwatched by me. In previous years, this might have vexed me; these days, though, I shrug my shoulders and take them in stride. Hey, I see what I can. (Not everyone can go to free press screenings, you know.)

So now, I open it up to all you fine readers of this here blog: Have you been left cold by a film on home video only to find that seeing it theatrically opened your eyes, or maybe even made you dislike it even more? Has the inverse happened? Has a theatrical experience made you do a complete 180 on a film? Above all, though: Am I crazy for choosing to pay to see older films in theaters rather than sticking to new releases? (You can tell me I'm crazy. I can take it.)
Posted by Kenji Fujishima at 3/26/2010 12:01:00 AM