A Distant Voice, But Not a Still Life 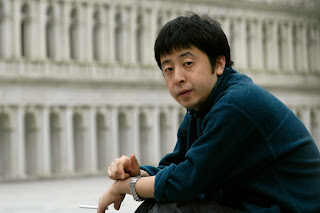 Starting tomorrow night, the Museum of Modern Art will be running a retrospective of the films of the highly acclaimed sixth-generation Chinese filmmaker Jia Zhang-ke. In my latest contribution to The Wall Street Journal's Speakeasy blog, I briefly discuss some of Jia's long-running thematic interests and filmmaking style, and then offer brief descriptions of some of his films. I wish I had been allowed to attempt something more critical in nature...but hey, the Journal already has its film critic—one who has, to his credit, lavished praise on Jia's recent work (putting Still Life—still my favorite film of his, by far—on his 2008 ten-best list, for one thing). So I guess this is the next best thing—anything to shine a light on arguably the most important filmmaker of the past decade.

As I note in the article, Jia is supposed to be in New York throughout this weekend, introducing the films being screened at MoMA. Tomorrow night, he and his leading lady, Zhao Tao, will be introducing tomorrow's opening-night feature, his 2004 sci-fi film/globalization parable The World. I aim to be there, and I also will perhaps try to see his 2001 epic Platform Sunday afternoon (just before the Oscars, natch). Truth be told, both Platform and The World are films I admire more than actually love—so, at the very least, this retrospective will offer me a chance to see them projected theatrically, to see if I warm to them more on a big screen.