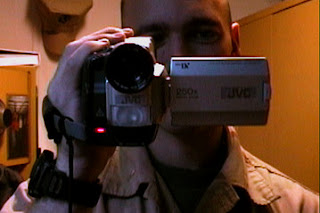 My latest piece for The Wall Street Journal's Speakeasy blog is an interview I did with both filmmaker Kristian Fraga and First Lieutenant Mike Scotti regarding their film Severe Clear, a first-person account of Scotti's experiences as a soldier in Iraq during the invasion in 2003. Yes, Scotti more or less filmed his whole time there with a miniDV camera on hand, and Fraga edited that footage down to 93 fairly compelling and eye-opening minutes.

I had to do quite a bit of editing myself to get this piece down to a more, um, "manageable" length; Fraga and Scotti were thankfully quite generous with responses, but that left me a lot to reluctantly hack away. Thus, I couldn't fit in Fraga's deeper discussion of documentaries in general (prompted by me asking whether he had seen the Sundance fave embedded-in-Afghanistan documentary Restrepo at the time of the interview), nor could I include Scotti's discussion of a charity for Reserve Service veterans for which he is a member of the Board of Directors. Nevertheless, I hope what is left is sufficiently scintillating.

And yes, the movie itself—interesting as much for its formal qualities as it is for its first-hand war-time account—is definitely worth seeing.

Here's a trailer, to give you a taste:

P.S. That aforementioned charity is called Reserve Aid, and, the way Scotti described it to me, it sounds like a very worthy cause: helping veterans out when they come home and find themselves in dire financial straits. You can read more about it at its Web site here.
Posted by Kenji Fujishima at 3/12/2010 12:01:00 AM