EAST BRUNSWICK, N.J.—It looks like I just naturally pick the really nasty inclement-weather days to trek out to New York.

Before Saturday, I had heard all the warnings about heavy rain and wind possibly causing flooding on the roadways. But who would have expected that all that heavy rain and wind would not only cause flooding, but would also knock out power not only throughout half of East Brunswick (and elsewhere, of course), but also throughout the NJ Transit train system, thus forcing the whole damn system to shut down for hours on end? Seriously, who predicted all that?

Naturally, yesterday was the day I picked to go to the Museum of Modern Art to finally see Jia Zhang-ke's Platform (2000) on the big screen!

A replay of that towed-car disaster in mid-December during that big blizzard? Thankfully, it wasn't quite that bad...but it was still pretty bad.

The trouble started after Platform's final credits finished rolling. I turned on my cell phone and got hit with two text messages: one from a friend I had met up with earlier in the day for lunch texting me to alert me to problems with NJ Transit, and the other from NJ Transit itself saying service on various rail lines, including the Northeast Corridor (my line, duh), was temporarily suspended "due to signal problems." Another NJ Transit epic fail? But then I discovered that someone had left a voicemail in addition to these two texts. The voice message turned out to be my mother informing me that the power was totally out not only at home, but throughout parts of East Brunswick, including many traffic lights.

Needless to say, this didn't sound like a simple NJ Transit epic fail after all...

After getting stuck in the MTA subways for a longer-than-expected time thanks to another power-outage problem, I finally returned to a frenzied Penn Station to discover that alas, Northeast Corridor trains were still not running at all. How the hell am I gonna get home?, I wondered in a momentary panic.

Then I remembered that there was a Suburban Coach bus line that departs from Port Authority Bus Terminal and stops, among other places, in downtown New Brunswick, close to where my car was parked. So I took a subway up to Port Authority and discovered, thankfully, that that particular bus line was still running. My excitement dimmed when I finally got up to the departing gate and saw a massive line for this one bus. Of course, I had to get home, so what other choice did I have except to stand on my own two feet and wait as long as I needed to wait in order to catch one of these buses? Even if that meant forgoing dinner altogether in order to ensure my place on that line.

I eventually did get on a bus, though it took a little over an hour of waiting to do so. That lengthy wait, of course, was surely preferable to waiting for a seemingly endless amount of hours at Penn Station for train service (which, according to an alert I got this morning, only finally got restored at around 7 a.m. Sunday). But tell that to my stiff legs! (I woke up Sunday morning feeling that stiffness big time; I had to put some Bengay on an area on my left leg to curb that stiff feeling.)

Being that this was rain and not snow, I got back to New Brunswick—with Rt. 27 unusually dark thanks to street lights having the power knocked out of them—and thankfully saw my car intact and, above all, untowed. So I rode back home to the eerie sight of Rt. 18 more or less completely dark thanks to the power outage. But my adventure back to 4 Oliver Ct. was not over yet.

Because of the non-functioning traffic lights, intersections were blocked off by cones—a problem for me, because I have to cross an intersection in order to get from one side of Rt. 18 to the other to get to my house. I thought of another route to take, but yet another blocked-off portion on a certain road on that route threw me off. More momentary panic ensued: What the hell was I going to do now? (Believe it or not, even though I've lived in East Brunswick for over 18 years, I still don't know it enough to be able to summon up a mental map of the whole city.)

I guess I got lucky: Somehow, after wandering for a few minutes around some residential roadways, I eventually found my way to the other side of that blocked-off portion of Summerhill Road and navigated my way back home. (Whew! So at least the parts of East Brunswick of which I can summon up a mental map eventually did help me out.)

And, when I finally got back home, the power was still out at my house...including our router, which meant no Internet access for me except via my cell phone, which itself was already on the verge of losing battery life, thus limiting my usage. Is this how it felt like living in the Dark Ages—with only candles providing illumination? (As I jokingly tweeted through my phone last night: "Where's John Alcott when you need him?"—Alcott being the cinematographer who got such sumptuous images out of mere candlelight for Stanley Kubrick in his 1975 masterpiece Barry Lyndon. On Twitter, Jim Emerson—he of the always illuminating Scanners film blog—responded to this tweet saying, "Sorry, you're in Gordon Willis world." Oh, in my house, it was probably even darker than what the cinematographer for the Godfather films wrought from low light!)

All in all: It took maybe two hours longer and more agita than usual, but I eventually got home from New York safe and reasonably sound, without having to force my long-suffering parents to drive out to pick me up somewhere. But man...what a storm! The results of it were still being seen Sunday morning, when I had to drive through heavily flooded areas of Rt. 18 to get to New Brunswick in order to get to work. Even on my way home from work on Sunday evening, parts of Rt. 18 northbound were still closed off. (This better not seriously impact my commute this morning!)

But once again, bad weather almost always seem to turn commutes back home into an adventure for me. (Yeah I know, it's moving time already.) Beware the ides of March indeed!

The burning question through all of this is: Was seeing Platform on a big screen ultimately worth all the hassle? Ultimately, I say yes. For one thing, the ending of the film, which left me rather indifferent to the whole on DVD, is even more devastating than I remember. I've increasingly began to marvel at just how different a big-screen movie experience can be compared to a home-video one. But then, that might not be anything new to most people. In any case, I will have more to say about this (and The World) in a future post.


***
For now, I'd just like to toss off a quick recommendation for a film that begins a five-day run at the Museum of Modern Art today that I saw and was quite dazzled by at last year's New York Film Festival. 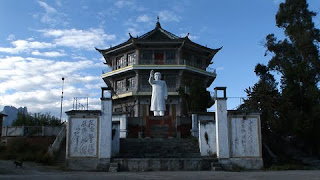 The film is called Ghost Town. No, it's not that David Koepp supernatural romantic comedy/drama with Ricky Gervais and Téa Leoni (though I do highly recommend that film as well). It's an immersive three-hour documentary from Chinese filmmaker Zhao Dayong that digs into the nooks and crannies of Zhiziluo, a town in China's Yunnan province that was once an important town to the Communist Party, but which has been abandoned by the government and essentially left to fend for itself. With utmost patience, curiosity and attention to detail, Zhao follows various characters in this town, spanning the generations, as they try to negotiate living in this desolate town, seemingly cut off from anything we might recognize as the modern world. It's perhaps a bit too sprawling, and some of the personal stories Zhao chronicles are more interesting than others (its second hour does sag a bit). But the film is so eye-opening and generously humanistic that the film, warts and all, engages the heart and the mind even through the occasional longueurs of its 169-minute running time. Ghost Town is a uniquely affecting epic about people who carry forward in the face of gradual disintegration. China may not care about a town like this anymore, but, for the people in Zhiziluo, they persist with their lives and traditions; they quite possibly know of no other choice.
If you have the time to devote to this rewarding tapestry, I strongly urge you to do so. (See MoMA screening info here.)

Here's a trailer for the film:

Also, for a bit of context regarding Zhao himself, here's an interesting New York Times article about him and other Chinese "guerrilla filmmakers," published on the eve of the film's lone New York Film Festival screening in late September. 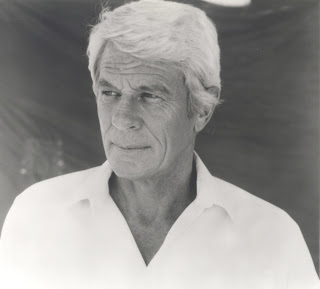 I don't really know his work, whether on "Mission: Impossible" or elsewhere, well enough to be able to offer any meaningful remembrance. Honestly, to me, he'll always be Captain Clarence Oveur from Airplane! (1980), the guy who most famously says to a young kid in the film, "Have you ever seen a grown man naked?"
Also, this classic bit of wordplay:
RIP Peter Graves.
Posted by Kenji Fujishima at 3/15/2010 12:01:00 AM