Jia Zhang-ke and Zhao Tao In The House!

EAST BRUNSWICK, N.J.—I had initially planned to finally take in Jia Zhang-ke's Platform (2000) on the big screen at the Museum of Modern Art this afternoon before heading over to an Oscar party in Park Slope tonight. But then, I took a look at the size of the bags I would have to carry all around New York before going to this party—a backpack, a bag of clothes for work tomorrow (I'm planning to sleep over my host's pad) and most likely a bag of some kind of food (it's a potluck)—and decided it'd be much easier to just go straight from New Brunswick to Park Slope. Thankfully, MoMA is showing Platform again on Saturday, so I'll plan accordingly.

The big draw for going to see it this particular afternoon would have been to see Jia in person and hear him introduce the film. I'll be missing him, alas...but no big deal, because I already saw him: on Friday night, with his leading lady Zhao Tao, introducing The World (2004)! I even took a couple of snaps with my pocket-size Canon PowerShot SD400: 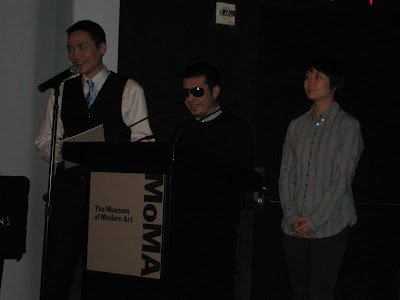 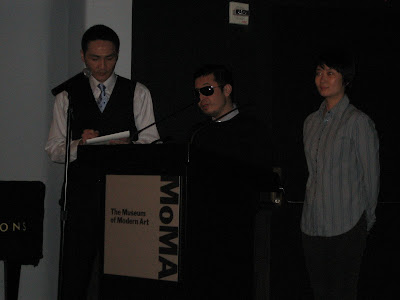 Pictured in both: Jia, middle, and Zhao Tao, right, still sporting that short hairstyle from 24 City
According to Jia, he was sporting those glasses as protection for his eyes, having strained it after long hours editing. Too bad...and yet, who knew that Jia could do a mean Wong Kar-Wai impression? 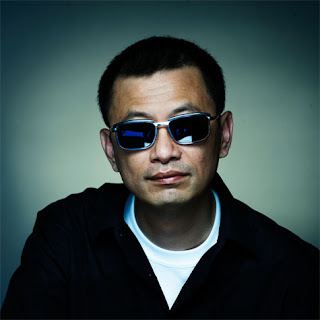 I have more to say about The World itself, but I'll save a more detailed consideration for another post. For now, I will say that my suspicions were confirmed: I found the film considerably more engaging on a big screen than I did watching it on my 42" LCD TV at home. It still may not quite challenge Still Life (2006) as my favorite of his features (sans Xiao Wu (1997), which I haven't yet seen), but it seems a lot richer, funnier, more beautiful and more affecting than it did the first time. Here's hoping for a similar revelation with Platform Saturday!
Posted by Kenji Fujishima at 3/07/2010 11:00:00 AM