It's All About Text and Subtext 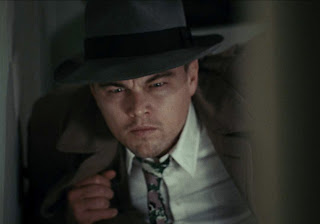 1. Apparently I am one of the few on Earth who didn't guess the film's big climactic plot twist within the first 15 minutes of the movie or so. Whether that makes me an extremely naive and gullible movie viewer is something I'll leave that up to you, dear readers, to decide. But I figured I might as well put it out there, to provide one reason as to why Martin Scorsese's latest film worked wonders for me. Also, I have not read the Dennis Lehane book on which this film is based (Laeta Kalogridis adapted it).

2. I think one of the main reasons I've been having trouble writing a coherent review of Shutter Island—why I am resorting to this point structure—is that the film is so much a visceral experience, with Scorsese putting all his cinephilia and masterly technique at the service of astonishingly vivid evocations of foreboding doom and, in some the extravagant dream sequences, deep personal sadness and grief. I could try to describe it, but no amount of words can quite do justice to the feelings the film inspires. And, of course, merely describing my own impressions wouldn't necessarily convince the film's many detractors. If I feel the heat of Scorsese's absolute commitment to this material, and someone else doesn't, then, really, what can be said? If you don't feel it, you just don't feel it. I felt it, big time.

3. One thing I feel I can effectively articulate: that Big Twist everyone's talking about in this film? Far from being an M. Night Shymalan-ish narrative trick, I think it's an absolutely necessary storytelling maneuver for the full impact of the film's vision of troubled humanity to register. And I think it works in context because it genuinely deepens our understanding of the dark psychological forces at work in this picture; its final scene, in one telling line of dialogue, pushes that understanding even further.

4. In some of his previous films, Scorsese has often explored the ways flawed male characters handle the violent animal inside them. Sometimes, like Travis Bickle in Taxi Driver (1976), they struggle to bottle up their anger before it explodes; others, like, Jake LaMotta in Raging Bull (1980), try to find some kind of absolution for the violence they commit in their daily lives. Still others, like the amoral mobsters in Goodfellas (1990), get off on their violent whims until they get caught—and even after they pay a significant price for the destruction their violence causes, they can't help but want to continue to do it anyway.

Shutter Island continues this theme, though in a way that is arguably more mournful in tone than any of those films. At the center of it is a man who has become so disturbed by the violence he has both witnessed and committed that he has essentially tried to dissociate himself from personal responsibility by reimagining himself as a U.S. federal marshal in a blatantly exaggerated riff on 1950s Universal haunted-house horror films. Not that you're supposed to know the nature of his psychosis right off the bat; Kalogridis's script—taking its cue from Lehane's book, by all accounts—plays this as a late-inning revelation rather than letting us in on this character's mental imbalance from the very beginning. Would the film have been more effective if we in the audience had known from the start? I wouldn't know for sure; that's not the movie Scorsese has delivered. And of course, it's not like the film ever takes place in a grimly realistic world to begin with. From its Murnau-like opening shot—of a boat materializing from a mist, almost like out of thin air—onward, it's evident that something is askew in this environment, something deeper than merely the crazies on Shutter Island. As with any great film, its opening teaches you how to watch it.

5. The first time Scorsese presents us with a flashback to the main character's memory of liberating survivors at Dachau and gunning down Nazis in cold blood, I admit, I thought of the "exploitation" criticism fleetingly. And yet, at no point does Scorsese diminish the horror of the Holocaust by evoking the Holocaust so explicitly; instead, it feels, especially in hindsight, like a perfectly valid injection of real-world horror into one man's extremely cinematic delusions. He doesn't, however, dwell on those horrors either, preferring to explore it strictly through the main character's pained recollections. It's not meant to make a direct statement on the Holocaust. Because, I mean, really, what else is there to say about the Holocaust that hasn't already been said? Surely we all realize by now that the Holocaust was a human atrocity of stunning proportions. What matters is that, as ever in Scorsese's world, there are no clear distinctions made between heroes and villains—not even when there are Nazis involved.

6. Scorsese's passion for the cinema is well known by now, both in his films and in public; you can sense that passion in Shutter Island with the delight he takes in recreating classic horror-movie tropes. The pleasures throughout much of the film, many critics would probably agree, are primarily visual, with cinematographer Robert Richardson and production designer Dante Ferretti doing some of their most expressive work in bringing Scorsese's ominous visions to chilling life. It's telling, then, that, when Shutter Island finally reveals its Big Twist, it does so in the most prosaic manner possible—as if Scorsese was shaking the character, and, by extension us in the audience, out of his nightmare, forcing us to confront the cold, hard, gleaming truth of his situation. By the last scene—filmed in broad daylight, by contrast to the relentlessly but voluptuously gray doom-and-gloom that had enveloped the prison island—Scorsese suggests, through visual terms, that his character has finally confronted his fears. He making a decision about the course of his life that only seems like a continuation of his madness at first, but which is in fact completely rational—and more thought-provoking because of it.

None of these visual choices strike me as merely artisanal or impersonal in the least...which leads me to wonder: Could Scorsese be making a stealth statement about the cinema here? At his best, he has used cinema as a means of exorcising his own demons, going all the way back to that famous image of Harvey Keitel tempting fate by holding his hands above church flames in Mean Streets (1973): one of his most direct expressions of Catholic guilt. That's basically what the main character of Shutter Island is trying to do by mentally splitting himself into two. But is it exorcism or merely escape? Perhaps Scorsese is subtly confessing to us all that not even using the cinema of his childhood as his means of expression is enough to confront his own demons. Perhaps cinema simply isn't enough for anyone, really.

Am I reading too much into it? As The New Yorker's Richard Brody has pointed out, the title does have the word "shutter" in it...

7. Shutter Island is smashingly effective as a psychological horror genre piece, but I can't say it's necessarily a movie that unsettles me in some long-lasting way. (Kiyoshi Kurosawa's Pulse (2001) was perhaps the last horror picture to inspire that kind of reaction in me, and I introduced myself to that one four or five years ago.) I don't hold that against Scorsese or the movie he's made, however; perhaps I just don't get frightened that easily these days. Nevertheless, I feel that there are despairing depths to this film that are worth taking seriously, not dismissed as merely a supposedly once-great filmmaker straining to find an entry point in genre hackwork. Scorsese's images are too full of tortured conviction for me to agree with that view. I hope, through this disjointed review, I've provided some talking points for further discussion of a film that I think is the richest new release I've seen so far this year. 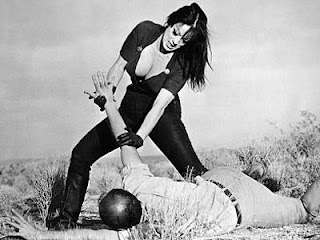 Here's a much older film that's just as rich in subtext than Shutter Island, albeit in a more unabashedly trashy surface. Russ Meyer's 1965 exploitation classic indulges in the male gaze at the beginning, only to gradually subvert it as the film bounces along ebulliently in its chronicle of violence, depravity and reversed gender roles.

The three strippers at the center of the mayhem are dominated by angry dominatrix Varla (Tura Satana), spilling boobs and all; the other two (played by Haji and Lori Williams) show, er, more nuanced brands of feminism, to put it lightly. After Varla kills a man (Ray Barlow) out of frustration and kidnaps his girlfriend (Susan Bernard), they all hide out in a secluded ranch owned by a lecherous wheelchair-bound old man (Stuart Lancaster) and his two sons, one a macho archetype par excellence (Dennis Busch) and a more sensitive type (Paul Trinka). All sorts of sexual power games ensue, climaxing with the image of Varla trying to ram her car into the silent macho son: a richly suggestive moment of female sexual domination.

Surely Quentin Tarantino had this, among many other trash classics, in mind when he deconstructed the chicks-hit-the-road genre in Death Proof (2007), which also climaxed with a violent image of women asserting their dominance over a fallen icon of male virility.

P.S. I was finally able to see this film, in a startlingly fresh-looking print, at 92Y Tribeca a little over three weeks ago thanks to the film series hosted by the blog Not Coming to a Theater Near You (which also brought Thom Andersen's Los Angeles Plays Itself to 92Y Tribeca in November last year). That said, it might have been a bit of a mistake to precede the film proper with trailers for some of Meyer's other films (including Beyond the Valley of the Dolls (1970), with its Roger Ebert screenplay). I haven't seen his other work, but Faster, Pussycat! Kill! Kill! is, by all accounts, his mildest in terms of raunchiness (no full-frontal breast shot in sight, for one thing). As brilliant as this film was, I also spent much of its running time pining somewhat for the even more over-the-top sexuality suggested in the trailers for, among other films, Mudhoney (1965), Vixen! (1968) and Beneath the Valley of the Ultra-Vixens (1979). It's as if those trailers were setting up expectations that this particular Meyer film wasn't quite willing to fulfill. That's no, um, "knock" against the film itself, mind you; I'm just being honest, is all.
Posted by Kenji Fujishima at 3/11/2010 12:01:00 AM