The Prison of Nature: Rescue Dawn 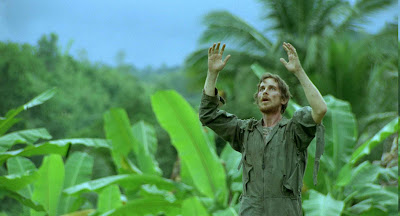 Nature has always been something of a prisoner in Werner Herzog's films. Both nature and Herzog's 1.37:1 film frame entrapped his conquest-obsessed characters in Aguirre: The Wrath of God (1972). And in Fitzcarraldo (1982), while Brian Sweeney Fitzgerald temporarily triumphed over nature by hauling that ship over a mountain, nature eventually helped defeat him as it tried to make its way down a river. In Herzog's most memorable films, nature stands as a great unyielding, uncaring force, resistant to man's ambitions, whether it's bringing high culture to indigenous people or simply---in the case of Dieter Dengler in both Herzog's 1997 documentary Little Dieter Needs to Fly and his new film Rescue Dawn (*** out of ****)---to survive. That those same films are often spectacularly shot and viscerally evocative don't compromise nature's brutality---more accurately, the beauty of nature acts almost as a taunt against the occasional ugliness of man's deeds.

Rescue Dawn---his first American fiction film---isn't quite free of compromise itself, unfortunately. As accessible mainstream entertainment, it certainly stands head and shoulders above the rest of the mostly dull crop this summer in its humanity, intelligence and visual beauty. But as a Werner Herzog work...well, while it has glimmers---significant glimmers, but glimmers nevertheless---of Herzog's personality and obsessiveness, none of them quite overcome the more conventional war-movie elements that run throughout the picture.

Of course, there's another way to read these familiar elements, which I'll try to roughly work out here: If anything, one of the most interesting qualities of Rescue Dawn is a sense that perhaps Herzog is adopting old-fashioned Hollywood war-movie conventions in order to subtly undermine and critique them.

Consider some of the conventions Herzog's films touches upon.

1. At the Laos POW camp where a few Laotians are holding Dieter Dengler and others, for example, the Laotians themselves are essentially treated as villains out of a Rambo picture, with each one given a nickname (Little Hitler, Jumbo, among others) and a cute/scary trait apiece. They're not exactly made human---although, of course, none of the prisoners are wont to see them as human either.

2. Dengler himself---who was captured by Laotians during the Vietnam War after his plane was shot down---is painted as an optimistic good ol' boy, not above giving the occasional stirring speech to his fellow POWs even as he recognizes the physical and emotional hardships of the situation he is in. He loves his country very much, as evidenced in a scene early on in the film when he refuses to sign a document denouncing the U.S. And his fellow POWs---there are five others---are a fairly colorful lot, including Duane Martin, weary and cynical, with a penchant for shitting at nights; and "Gene from Eugene" (Jeremy Davies, in an effectively stylized performance), who speaks like a hippie yet still holds out hope that rescue choppers will come and whisk them home even after being a POW for about 2½ years.

3. The last scene---and heck, much of the movie itself, by extension---is perhaps the most conventional of all, the Herzog equivalent of the slow-clap scene as Dengler is welcomed as a hero after his harrowing ordeal.

But Herzog complicates these cliches in small but notable ways, and these complications are where Herzog's personality---familiar from both fiction films like the aforementioned Aguirre and Fitzcarraldo and nonfiction works like Grizzly Man---becomes most evident. So not all of the Laotians are mean and cruel, and even the nastier ones aren't allowed to be painted as subhuman monsters---even if it's not like we ever get to know or understand them or anything. (Besides, can one blame them for being deeply suspicious of Americans, especially as Americans are raiding and bombing parts of Laos in secret in the early stages of the Vietnam War?) Dengler himself is no jingoistic John Rambo; he says he loves America "for giving him wings," because all he really cares about---as he tells a Laotian and later tells Duane---is flying. (A story he recounts about how he looked into the eyes of an enemy pilot and decided all he wanted to do was fly is indicative of how apolitical both Dengler and the film itself is.) Even the "uplifting" close hits soft notes of subversion: in order to reach that overjoyed crowd on board a naval base, he has to be secretly carted out of an army hospital where he is being questioned by men in black to get information helpful for the war effort. And then, when asked what kind of advice he has for others in his position, Dieter provides some unexpected words: "When something is empty, fill it. When something is full, empty it. When you have an itch, scratch it." Puzzling as they may be at such a moment, to me those words embody Dengler's mindset perfectly: for him, it's not about patriotism or a cause greater than himself, it's all about survival---survival, perhaps, in order to fly again.

Rescue Dawn isn't a pure Herzog film like Fitzcarraldo, Cobra Verde (1986) or, supremely, Aguirre, but it is still a superior entertainment, gripping, sometimes harrowing, always involving. It's a lot more Hollywood in feel than any of those three features (especially in the way it characterizes the Laotians and Vietcong---a reminder that most films set during the Vietnam War made in this country have dealt more with Americans than with the people on the other side), and while some of it is disappointing in that regard, Herzog still allows enough of his obsessions come through to make it a worthwhile, if imperfect, addition to his distinguished filmography. And by the film's final third---as Dieter and Duane are forced to go it alone---Rescue Dawn begins to feel like quintessential Herzog, with beautiful passages that have the power of a silent film, coasting on the considerable strengths of cinematographer Peter Zeitlinger's surreal, hazy-blue, modestly Apocalypse Now-ish images and Klaus Badelt's moody score (shades of Popol Vuh's indispensable music from Aguirre and other Herzog films from the 1970s and 1980s. With Zeitlinger's and Badelt's help, Herzog is successfully able to evoke the feeling two solitary figures forced to deal with all the challenges cruel nature puts in front of them. The jungle, indeed, becomes a kind of second prison.
Posted by Kenji Fujishima at 8/07/2007 02:53:00 PM