Does the fact that I slept pretty deeply on the plane during the day from San Francisco to New York---dreams and everything---signal an uphill struggle against jet lag similar to the way I spent my first few nights in Beijing struggling to go to sleep?

Yes, I'm back on U.S. soil, and none the worse for wear. It feels good being back home, because I'm in comfortable territory here---but, having finally taken what I consider a big step in traveling to a foreign country for the first time in, oh, 12 years, I'm already itching to travel somewhere else far from home, whether within the United States or abroad. (I'll probably wait until next year for another trip abroad, especially if I'm paying for it.)

I'll have more detailed thoughts and impressions soon. For now, how about some more pictures?

**********
Our day in Suzhou ended with both a visit to the Hanshan Temple and a boat ride down one of the city's famous canals. I must have once again run out of battery sooner than I expected at this point, so I have no pictures from both at present. Hanshan was quite beautiful, though, especially seen afar with one of Suzhou's canals below.

Actually here's one picture I was able to get on my camera from one of Suzhou's canals: 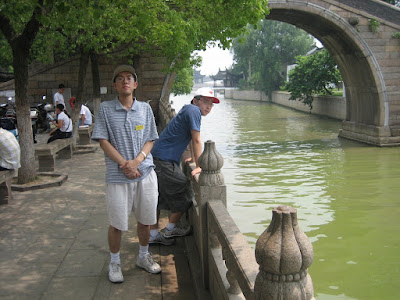 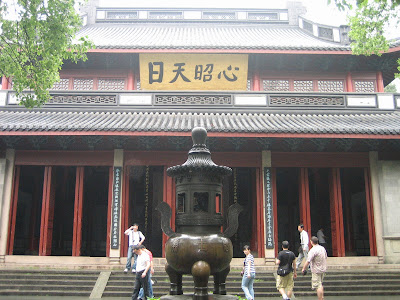 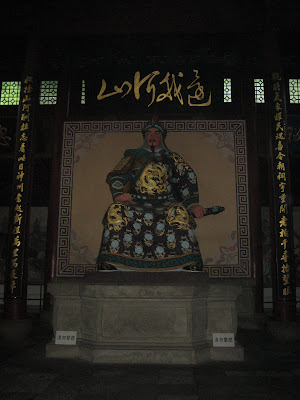 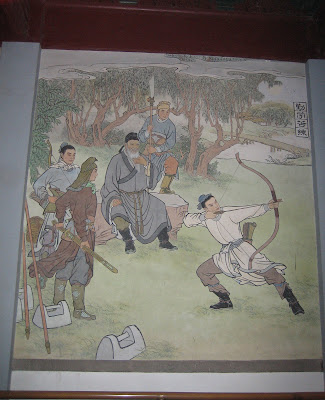 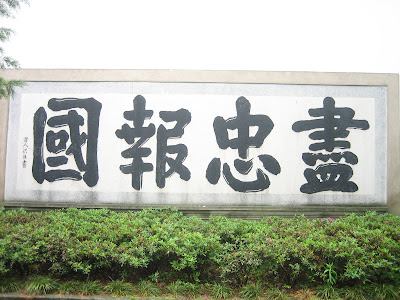 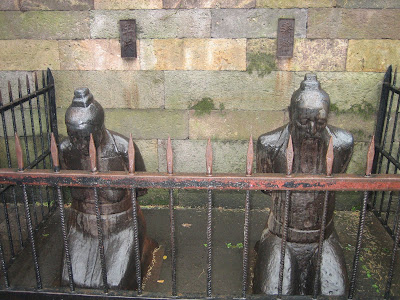 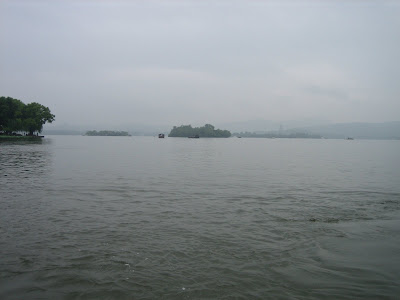 I tried to capture, with that ship in the middle, a divide between the big city and the rural trees in the horizon. Not sure if I was all too successful, though, but you can judge for yourself. 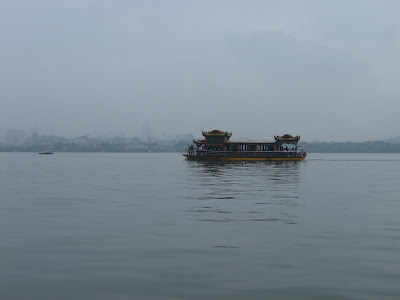 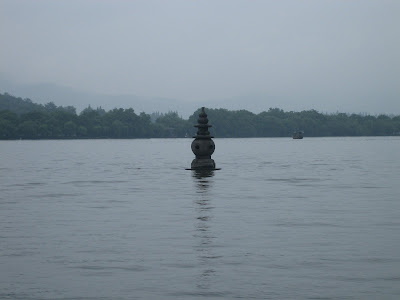 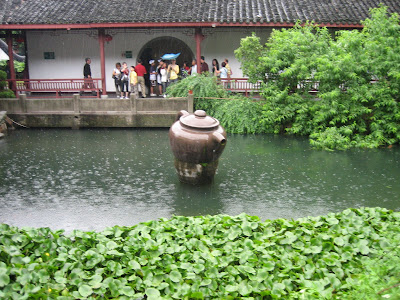 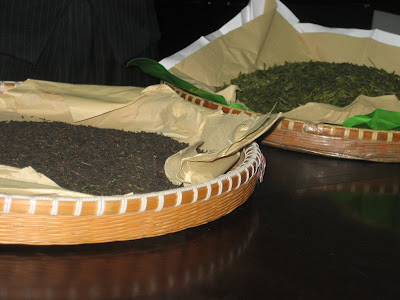 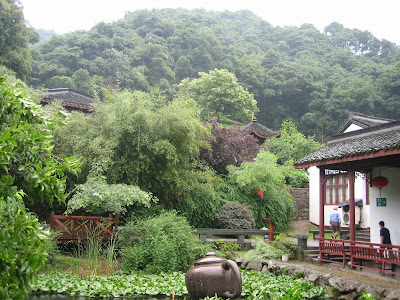 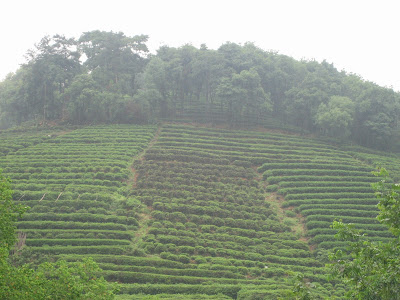 I tried to catch the Shanghai Stadium in passing; I don't think I was particularly successful, but I'll post the picture anyway. 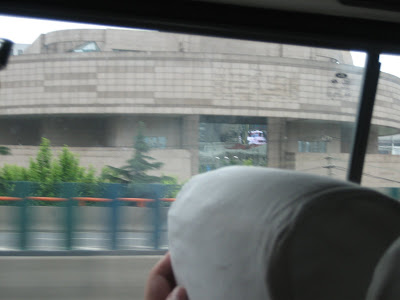 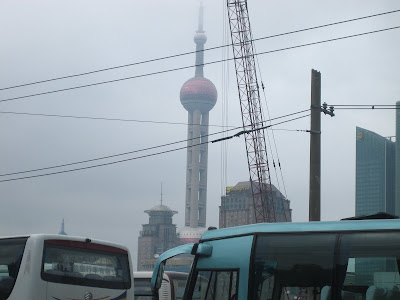 Shanghai at night---Times Square anyone? 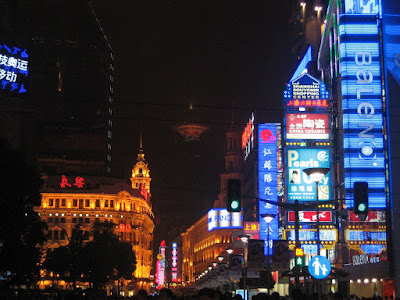 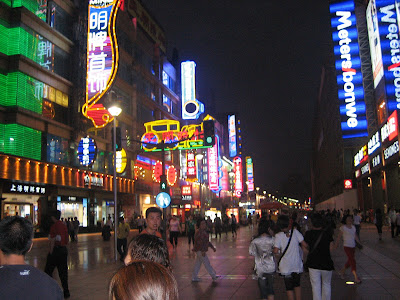 Sights like these almost made up for my missing Hong Kong this time around.

And finally, a view from the Bund---the Shanghai skyline (although, unfortunately, the weather wasn't exactly the best for seeing it clearly). 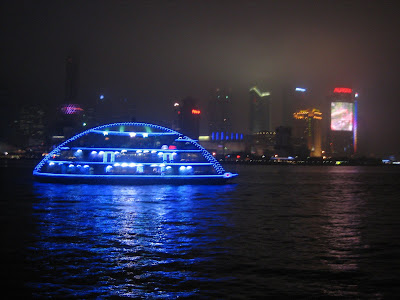 The new Beijing Olympics stadium, in long (and foggy/smoggy) shot: 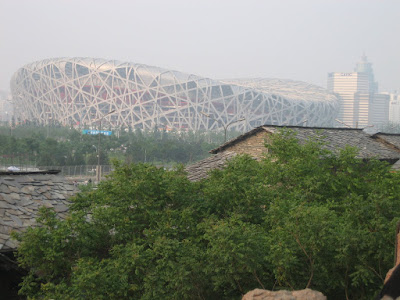 Another thing I can cross off my I-can-now-say-I've-done-it list: getting a full-body massage. Nope, never done it before. Would I do it again? Well, this particular experience was...interesting, to say the least. I'm not much of a let-yourself-go kind of person, so some of it was more uncomfortable than relaxing. (Besides, I was trying to keep a conversation going with the two female masseuses in the best Chinese I could muster.) But it sure did its job on my joints after the 1 1/2-hour session was over: they felt somewhat close to rejuvenated. 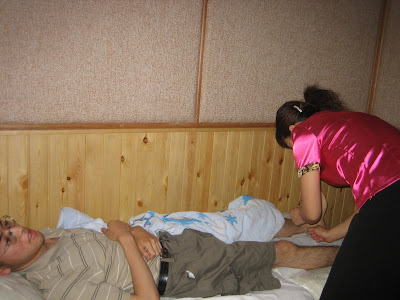 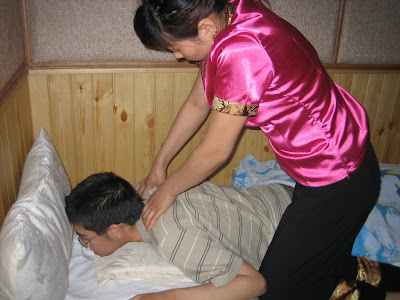 Wuxi is also apparently known for its pearls. So we visited a pearl factory/store. Here's an appetizing shot of pearls in a real live oyster. 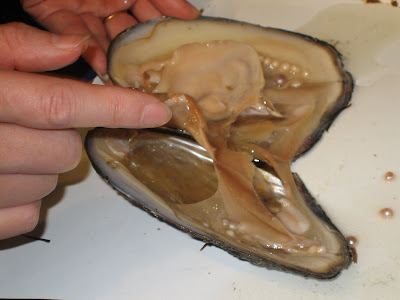 Pictures from perhaps the best hotel we stayed at, the Grand Metro Park Hotel Suzhou. 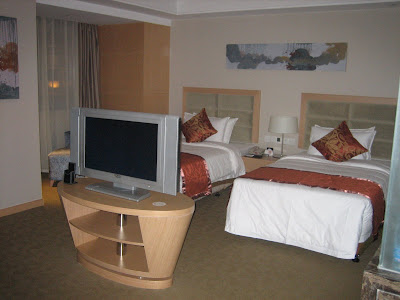 Nice, but wait a minute: where's the lock to this bathroom door?

Answer: there is none. Watch out! 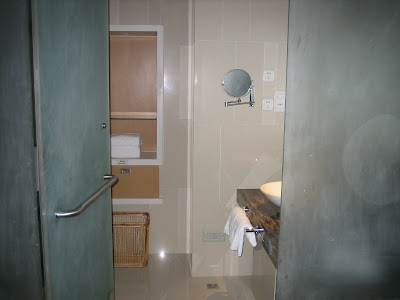 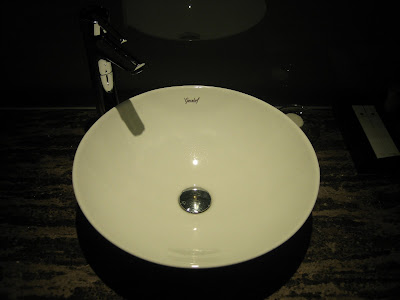 Suzhou seems to have gotten the environmental message faster than most American cities: its streets are rife with bikers and electric scooters. It almost made me wish I could have one of those scooters. 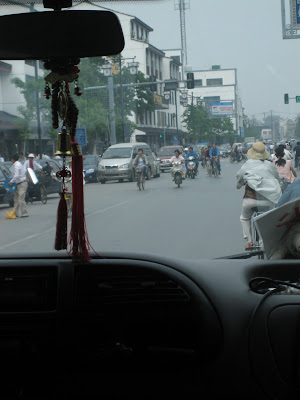 Only thing I regret is not taking photos of some of the food we ate over the past week-plus---especially the Peking duck.

And last but not least, here's a photo of some of the group members in the three-day Beijing leg of our tour, along with our lively tour guide, Andy, peering in all the way in the back. 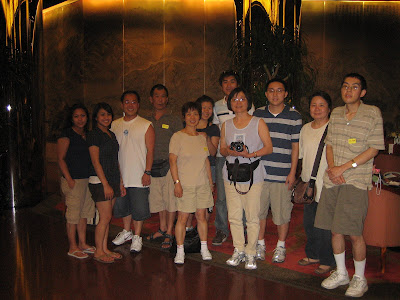