EAST BRUNSWICK, N.J. - Sometimes personal life lessons come in situations you never expect. And boy, did I not expect this one.

This one has something to do with the danger of missing golden opportunities, because I realized today that I totally missed a gleaming one, and this one fucking pains me...hard. 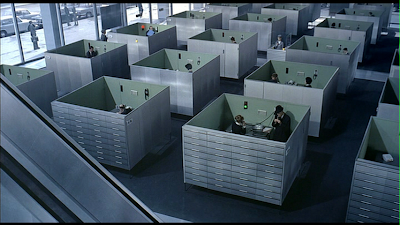 For those of you who aren't aware, the still above is from Jacques Tati's 1967 film Playtime. Playtime is one of the grand follies of the cinema, a film of staggering visual and thematic scope that encompasses no less than the modern world in all its faults and glories. It's a film that took three long, hard years for Tati to complete, and its box-office failure just about ruined the filmmaker. But it is, without a doubt in my mind, one of cinema's great masterpieces: visually innovative, full of insights into the world we all live in, and (despite Wall Street Journal film critic Joe Morgenstern's protest to the contrary) overflowing with emotion, humor and humanity. And I'm not just saying this because that's the consensus among the film elites: every time I walk around in New York City or scan my eyes around an office, I find myself fondly remembering equivalent images from Playtime, and then I can't help but marvel at Tati's vision, it's visionary-ness---how acutely Tati understands modernity, and how he's able to translate it into sheer visual splendor.

But, in a sense, despite my two DVD viewings of this film, in a sense I haven't really seen Playtime at all. Tati shot it in the grand 70mm. format---think something akin to IMAX---and, during its initial run in France, demanded that his film be shown only in theaters equipped to project 70mm film. The big screen absolutely matters for Playtime because of the way Tati shot this work: he uses no close-ups, relying solely on long shots, and filling his frames with multitudinous visual details. To really get the full effect Tati was going for---of being immersed in a world similar to our own, taking in everything left and right---it pretty much demands to be seen on the biggest screen possible, where it is possible one could go dizzy at the array to choices for your eye to focus on in one shot. Truly, Playtime is a democratic film both narratively---there is no main character to ground the (deliberately thin) storyline, only groups of people going in and out of the wide frame---and stylistically.

Suffice it to say, I have not seen Playtime in 70mm., so I only have hearsay to go on as far as the film's effect in its intended format goes. But this Sunday, I found a bright, shining opportunity to rectify that oversight: yesterday, the Film Society of Lincoln Center scheduled four showings of a 70mm. print of Playtime at the Walter Reade Theater in New York. I only found out about this once-in-a-blue-moon chance Sunday through a blog post written about the film itself by a House Next Door contributor, but my immediate response was: this is way too good to pass up! To see one of my favorite films---if not my all-time favorite---of all time on the largest screen imaginable? I could only imagine the euphoria that would arise after it was all over.

So...why is it that I was nowhere near Walter Reade last night---instead, I was in East Brunswick activating a new cell phone and trying to decide on new frames and lenses for my new eye prescription---and that, only now, do I find myself realizing, with agonizing frustration, what an opportunity I had just blown?

Yes, readers: I missed this one-day showing of the 70mm. version of Playtime---but worse, I did it deliberately, knowing in the back of my head that I was probably going to regret missing it if I didn't take the chance, but deciding to skip it anyway. (I certainly could have rearranged my schedule for it, so I can't even chalk it up to that.) That near-self-destructiveness if I've ever seen it.

**********
I could probably rattle off a million reasons what came into my head to somehow convince myself that this was a screening worth missing. Mostly, I think it was this: I've been increasingly staying in NYC after work recently to catch 2008 flicks, and I guess in this case I was hit with my usual bout of self-consciousness and overriding concern for what others---principally my parents, specifically my mother---thinks of my near-rabid movie-devouring. Whenever I tell my mother that I plan to stay for an extra few hours in the city and thus miss dinner at home, I can sense the disappointment in her voice nearly every time, even if she doesn't express it explicitly---she seems to be very big on having the whole family present for dinners. Keeping that in mind: I had already stayed after work on Jan. 1 to see Waltz With Bashir at the Landmark Sunshine Cinema, and I did so again Sunday evening to see The Wrestler (which, by the way, I would indeed highly recommend, and not just for Mickey Rourke's excellent but slightly overhyped "comeback" performance). I guess somehow I got it into my head that to do it again for a second night in a row would be to risk making it look like I was merely getting carried away in my mother's eyes (and I remember all too well the times in the past that my mother has scolded me for being too carried away with something, in her eyes---especially over something like music or movies, because "movies aren't everything").

All my impulses were telling me to go with my gut on this, but then my head, as it sometimes does, prevailed---and now my gut is feeling more wrenched than it's felt in recent times.

This, however, is not meant to be an excoriation of my mother; Lord knows, I've done that plenty of times on this blog and others in the past, and I've come to realize that, most of the time, she knows not what she does to me. She is not to blame. It's mine...all mine. And it sucks. It really friggin' sucks.

So this is an excoriation of myself. What am I kicking myself for? This is not just about missing the chance to see one of the greatest films ever made on one of the biggest screens possible. This is about a trend that I've noticed in my life, one that I've always recognized but never really done much about: the tendency to overthink a situation and thus to leave open the possibility of missing perhaps once-in-a-lifetime opportunities such as this. (I mean, perhaps the Film Society of Lincoln Center will, five years down the road, decide to do something like this with Playtime again. But it is going to be a long, looooooong wait 'til then, I suspect...)

**********
Here's a pre-emptive blurb about one of my top 10 favorite films of 2008, Mike Leigh's Happy-Go-Lucky: if the film, through its main character Poppy, tells us anything about ourselves, it's that happiness is more or less what you make of it. You can internalize all your frustrations and anger and become someone like the out-of-this-world driving instructor Scott, seemingly unable to enjoy even a hint of joy in his life. Or you can be somewhat more like a Poppy: not to try to deny reality, and perhaps not so hellbent on trying to bring joy into people's lives like Poppy sometimes is, but to find a measure of hopefulness and understanding in even the least appealing of people and circumstances.

Well, I consider this blown opportunity a pretty damn unappealing circumstance...but, after spending about an hour this evening wallowing in my despair over missing it (the stunning realization occasioned by a film blogger's ecstatic Twitter note), I decided that I would not let this depress me, and instead decided to try to find some optimism amid the personal gloom.

Here's what I've come up with: basically, I have resolved that no more will I ever---ever---knowingly let opportunities like that slip through my fingers if I can help it. Carpe diem, right? No regrets. I don't need any more regrets; I've already experienced my fair share in 23 years.

And to expand this even further: obviously, to be able to seize opportunities, in some cases you have to know what opportunities are out there in order to take 'em, because sometimes they won't present themselves to you in plain view. Logically, then, if I want to be in the sight-line for golden opportunities, I will have to be constantly on the look out, constantly active, surveying a particular scene with a roving eye. That kind of activeness doesn't always come easily to me, however: I think I've always been kind of a passive person---not simply letting things come to me, mind you, but always hesitant to take certain bold steps. (Even at work, I sometimes might let a certain small error pass by just because I'm a bit too nervous to go to an editor and bring it up, for various reasons. That just isn't the way to go in the journalism business, and yet it's something that I sometimes can't help but struggle with.) In the past, I've ruminated, here online and/or elsewhere, about the reasons for my sometimes passive nature...but I guess I've come to realize, what's the point of all that navel-gazing? It'll just leave you even more depressed. Better to just try to improve that certain problem area and move along. And, of course, if you experience a setback, there's no point in wallowing in what could have been. You can't turn back time and make things better; I don't have a DeLorean time machine to try to go back to the past and smooth things out in the present.

I think I'm rambling now, so I'll just end here: I think you all get the point. Resolved: never, ever again will I let something like this happen, at least if I can help it. Take whatever opportunities you see, especially if you think they're too good to pass up.