No Limits to Interpretation

EAST BRUNSWICK, N.J.—Inspired by my second viewing of Jim Jarmusch's The Limits of Control on DVD today, here's an image I wanted to share with all of you, the significance of which I will try to explain below: 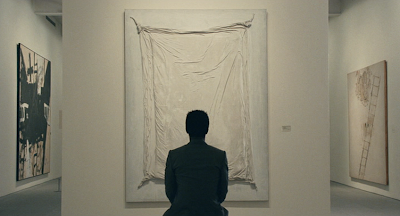 The Limits of Control, Jarmusch's latest film, is one of the most divisive not only of this year, but of the great iconoclastic director's career: Many decried it as Jarmusch's shallowest film ever, while others defended it as quite possibly his most "earnest" work. I saw it at the Angelika Film Center sometime during its theatrical run in May, and while my experience of watching this abstract, minimalist, deliberately repetitive film ranged from fascination to occasional moments of boredom, by the end my head was swimming in intellectual and visceral overload. A second viewing today only strengthened my affection for it—and the image above encapsulates why.

For those who have not seen the film (and watch out; there may be spoilers ahead): The Limits of Control is basically one extended shaggy-dog tale about a nameless Lone Man (Isaach de Bankolé) who embarks on a vague mission that involves meeting up with a slew of bohemian characters who spout off on subjects related to art and science, and exchanging matchboxes with cryptic clues on small pieces of paper (all of which he disposes of by putting them in his mouth and washing them down with espressos). That's pretty much all there is to the storyline; the story, one soon realizes, is hardly the point. This is one of those films that are almost entirely about how ideas, characters and moods are expressed through sound and image. Thus, Jarmusch lays on the druggily evocative drone of Japanese band Boris; rhymes shots and camera angles as a way to evoke the Lone Man's insistent focus on routine; and so on. To try to describe it all is to perhaps miss the point; this is a movie above all to surrender to, to experience.

This is not to say, however, that The Limits of Control is merely about pure sensation. I do think Jarmusch has an honest-to-God subject—maybe even a message—here, one that resonates with me as someone who is deeply interested in art in all its various forms: It's a film about opening oneself up to different ways of looking at the world. "Reality is arbitrary," the Lone Man utters during his meeting with his assassination target—an unnamed American played by Bill Murray—repeating a mantra uttered by one of his contacts. Jarmusch, through his exultant celebration of the sheer movie-ness of the particular alternate reality he creates in this film, suggests that one's view of the world is basically what one envisions it to be, through science, painting, film, music, etc. Unlike what the Lone Man's American target believes about himself, no one really has a monopoly on an understanding of the way the real world operates. (Anyone who thinks he does "ought to go to a cemetery," as another repeated mantra in the film goes.)

This brings me to the image above. In The Limits of Control, the Lone Man himself doesn't say a whole lot, sticking closely to his habits and routines (including a tai chi routine he's glimpsed doing in his fancy clothes), and keeping his emotions mostly in check. He operates, then, as a kind of blank slate on which his contacts can voice their various visions of art and reality—and that, I think, is what the above image expresses beautifully. After he has accomplished his mission, he returns to the Reina Sofía Museum in Madrid and takes in a work of art—Antoni Tàpies's "Gran Sábana"—that is essentially a white bedsheet spread across a canvas. If, in his previous excursions to the museum, he has looked at artwork that illustrates images he encounters in real life, this time he's looking at a work that basically mirrors himself.

When it comes to approaches toward art, I'm not always so much interested in what a work of art can tell me about myself, but what it can reveal either about the artist himself or the wider world. In some ways, I feel something of a kinship with this nameless, impassive hitman. And that's why I find the above image very beautiful, and why I think The Limits of Control resonates with me as deeply as it does.
Posted by Kenji Fujishima at 12/17/2009 08:56:00 PM