EAST BRUNSWICK, N.J.—I didn't watch much of Sunday night's Grammy Awards telecast; sure, I've heard of a lot of the nominated artists, and I've even heard some of the nominated songs, but my interest in today's American pop music is passing at best. (These days, I'm plowing through a complete set of period-instrument Mozart performances—which, I think, gives you a bit of an idea where my musical interests lie.)

But I heard from some of my friends on Twitter that the opening performance, a typically no-holds-barred Lady Gaga medley that eventually segued into a duet with Elton John, was one of the highlights of the night. I was a big Elton John fan back in the day, and still enjoy hearing his stuff; as for Lady Gaga—well, I initially simply heard hit tunes like "Just Dance," "Poker Face" and "Paparazzi" as standard overproduced electronic pop fluff until I read this essay at The House Next Door about her music videos and realized that people were indeed taking her whole package seriously as some kind of Warholian work of art. An astoundingly successful popular artist somehow using her fame and fortune to stage a mass meta-commentary on said fame and fortune? Call me shallow, but that sounded rather interesting to me...and day by day, I find my curiosity about her rising.

Well, I finally checked out that Lady Gaga/Elton John duet (the video of which is above), and it may have provided the final push to finally wade deeper into her music. Why? Because, simply put, the performance gave me honest-to-God chills...the kind of goosebumps that greeted my initial exposure to this artist: 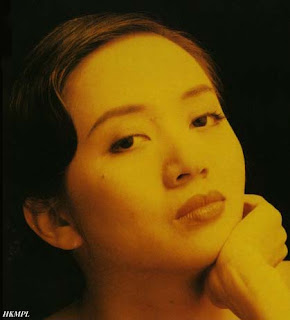 That, my friends, is Anita Mui (1963-2003), the late, great Hong Kong pop star from the 1980s and '90s who was quite the obsession for me a year or two ago. Cinephiles, of course, will recognize Mui from such films as Stanley Kwan's Rouge (1987), Tsui Hark's A Better Tomorrow III (1989), a handful of Jackie Chan flicks (Miracles, The Legend of the Drunken Master, Rumble in the Bronx), Johnnie To's The Heroic Trio (1993), and others. But she was also the Cantopop sensation of the '80s, earning comparisons with Madonna for her flamboyant style and ever-changing public image—much the same way Lady Gaga is garnering serious criticism with her music and public persona now.
For all the flaunting of her sexuality and her extravagant stage manner, though, Anita Mui was, first and foremost, a wondrous singer, with a deep alto tone that could startle you and an emotional range that could knock you down flat. I remember the first video I ever saw of her, a live performance of a 1989 hit of hers entitled "夕陽之歌" (roughly translating to "Sunset Song"):

Under Mui's glorious voice, what could have come off as a bland love ballad felt instead like a searing emotional five-minute drama. As someone who barely knows Cantonese as it is, I didn't understand the words she was singing—but, on an intuitive level, I could grasp the deep, wistful emotions roiling underneath.

The song, by the way, is named "壞女孩," or "Bad Girl" in English. Looking at the way she moves onstage during that performance—yeah, bad indeed.

Why did Anita Mui cross my mind when watching Lady Gaga at the Grammys? Only one reason, really: Ah Mui could sing stunningly well live, even while doing all sorts of elaborate choreography and costume changes...and so, it seems, can Lady Gaga. I mean, I knew she had a fine voice based on hearing many of her hits, but that singing voice was often deliberately technologically manipulated for effect. Shorn of any technological safety nets, however? If anything, she sounded even better singing "Poker Face" live (it certainly didn't sound lip-synced to me). And—I didn't know this before seeing the Grammy video above—she can play the piano! And she did so with Elton John!

Anyone that can pull all of that off in six minutes of near-blissful stage pop spectacle automatically garners a certain level of respect from me. (Listen to Taylor Swift's off-key live Grammy performances by comparison—though, sure, being a mediocre live performer doesn't automatically make her an inferior artist or anything.) This new pop icon Lady Gaga, it seems, is also simply an immensely talented musician. Even if her current self-aware stage persona grows old—and inevitably it will—she at least has the technical chops to be able to do what Anita Mui (and, oh yeah, Madonna) did throughout her Hong Kong pop stardom in the '80s: become something of a chameleon, trying on different public images and stage personas, keeping her act fresh. Being a spectacular singer, like Anita Mui was, is certainly a good leg to stand.

Just for fun, here's a photo of a wax statue of Ah Mui that resides at Hong Kong's Madame Tussaud's Wax Museum, which I took during my Hong Kong venture last year: 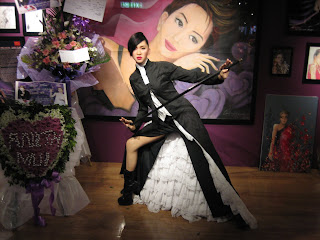 ***
And, oh yeah...weren't Oscar nominations announced yesterday? Yes, they were...and again, I find myself at a loss to say anything of interest about them, feeling neither particularly enthusiastic about deserved nods nor outraged about perceived snubs. AMPAS's taste, at least based on their awards choices over 82 years, has almost always been generally safe and middlebrow, and I don't expect that to change anytime soon. No use getting all emotional over it; just enjoy the drinks that will inevitably flow come Oscar night!

Of course, that is not to say this will be my last word on the subject. Last year, during a brief stint with the general-interest Web site suite101.com, I came up with a list of alternate Best Picture Oscar nominees for that year. Maybe I'll do so again this year. Maybe not. We'll see.

Actually, since I'm here, I might as well offer one personal observation: Remember those days in the early stages of awards season when Carey Mulligan was the front-runner in the Best Actress category for her "star-making" (according to many critics) performance in An Education? Funny how things change in a matter of weeks...and no, I still haven't seen Sandra Bullock in The Blind Side. Didn't seem all that appealing to me when it came out. Guess I'll finally have to, now that it also scored a nomination in this year's pointlessly overstuffed Best Picture category. I may not take the Oscar seriously as an indicator of any sort of artistic quality...but I do like to keep up with the conversation. I suppose that's the journalist in me talking.
Posted by Kenji Fujishima at 2/03/2010 01:31:00 AM

Lovely article. I had very similar thoughts when I became a Gaga fan in 08. I did not discover Anita until after her death during college when I youtubed and googled her entire career and her music. Great analysis between the two artist. These two have pretty much dominated my MP3 player and have been quite inspirational.

I guess the only thing that separates Ah Mui and Lady Gaga is that the former never made the kind of extravagant epic-length and -scaled music videos for which the latter has become known.

Thanks for a thoughtful piece - I agree with you that Gaga blew me away when I heard her duet with Tony Bennett. Behind all her costumes and props, she's a very solid singer.

I have been a lifelong fan of Anita Mui (ever since I was about 10), and also agree with your comments about her artistry (which many people miss because they are too busy commenting on her costumes and images, etc.).

I just wanted to let you know that "Sunset Melody" is not a love song, but a song about the ups and downs of life -- the singer laments how quickly glories fade, and expresses a yearning to "go back" and live a simpler life. Anita sang this at the peak of her career, and that was probably her favorite song of all time. She always said that it felt like she was telling her own story. So when you said it was 5 minutes of emotional drama, you were right, even though you couldn't understand the lyrics!

Thanks again for a thoughtful piece.

Thanks for clarifying that re: "Sunset Melody," Felix. If anything, it strengthens my own feeling that it's probably my favorite song of hers, too.