My main regret from last week is not being able to find time to post a blog entry for this film preservation blog-a-thon hosted by two elite film blogs, Self-Styled Siren and Ferdy on Films, etc.

I had been planning to craft a spiel about one silent-era masterpiece that, as far as I know, has yet to be properly, and rightfully, restored: King Vidor's 1928 film The Crowd. Turner Classic Movies, that television haven for cinephiles, showed the film during primetime on Thursday, Feb. 18; I was going to post an appreciation for the film in correspondence both with the blog-a-thon and with that TV screening.

But last week, I was called upon to once again lend my copy-editing eye to the upcoming March issue of WSJ. magazine. Knee-deep in proofs and obsessively editing and fact-checking articles about all sorts of high-end lifestyles, hobbies, clothing styles and merchandise, I found little free time both during and/or outside of work to be able to write a carefully considered post about the film.

And now the blog-a-thon is more or less drawing to a close. Well, for what it's worth, at least I contributed monetarily to the cause of film preservation, making a tax-deductible donation to the National Film Preservation Foundation. That's at least one of the raison d'êtres of the whole enterprise, anyway.

I'll let the following boilerplate—or, part of it, at least—give you all an idea what this blog-a-thon is about:


The National Film Preservation Foundation is the independent, nonprofit organization created by the U.S. Congress to help save America’s film heritage. They work directly with archives to rescue endangered films that will not survive without public support.

The NFPF will give away 4 DVD sets as thank-you gifts to blogathon donors chosen in a random drawing: Treasures III: Social Issues in American Film, 1900-1934 and Treasures IV: American Avant Garde Film, 1947-1986.

Well, I for one think this is a worthy cause...not just for geeky cinephile reasons, but for important historical reasons. The United States was perhaps the most instrumental in pushing the motion-picture medium in its infancy into the realm of popular art; and so much of 20th-century history has been documented through motion pictures—not only through documentaries and newsreels, but even through fiction. What is 1940s and '50s film noir, for instance, if not an implicit reaction to the national anxieties and horrors of World War II, refracted through a genre framework? Heck, even the most low-grade American International Pictures flicks from the '50s and '60s can be said to give us an idea of what turned on American youth during the decades of the Cold War and Vietnam. If nothing else, it's worth saving these kinds of films not just as catnip for film completists, but as potentially revealing barometers of our national history.

So that's my plug—a bit late in the game, perhaps, but there you go.

Oh, and as for The Crowd: I had the privilege of seeing Vidor's film twice during my Rutgers undergrad years—both times on laserdisc—and both times I found myself moved and gratified by its deeply sympathetic look at its ambitious working-class main character trying to make a name for himself while raising a family amidst the anonymity of big-city living. Its view of the falseness of the American Dream may be bleak in many ways, but the film is ultimately not without a certain measure of hope in the end...even if that hope comes more from accepting one's given situation rather than striving like hell to rise above it.

Vidor's film isn't exactly a long-lost classic: it was nominated for an Academy Award in 1928, and it was picked for the U.S. National Film Registry by the Library of Congress in 1989. So it's pretty widely acknowledged as an important work. And yet, the film for some reason remains crucially absent on DVD, joining the company of such films as Greed (1924) and The Magnificent Ambersons (1942). If this blog-a-thon will somehow help even a film like The Crowd stay in the public eye, then yeah, I'm all for it.

(If you want to contribute to the cause of film preservation, DONATE NOW TO THE NATIONAL FILM PRESERVATION FOUNDATION.)


***
Yesterday, as part of its Film Comment Selects series, Film Society of Lincoln Center presented a program of rare Godard films and videos at Walter Reade Theater. Entitled "Godard Rarities," the approximately 90-minute program, conceived by BAMcinématek curator Jake Perlin, not only featured select short films/videos made by Godard and segments from other directors' films featuring the French New Wave legend, but also trailers for some of his features (including one for his upcoming film, Socialisme). It was a fascinating and provocative program, as Godard's work itself usually is. Another typical feature of Godard's work: it made me feel like I was endlessly playing catch-up to Godard's ceaselessly experimental and inquisitive aesthetic and philosophical sensibility. Godard is, for better and worse, a filmmaker for whom the phrase "ahead of his time" still feels startlingly true today.
There are two "rarities" from the program that I wanted to mention here:
1. Il Nuovo Mondo (1963): This was Godard's contribution to the omnibus film RoGoPaG (Roberto Rossellini, Pier Paolo Pasolini, and Ugo Gregoretti contributed other segments), and it cheekily anticipates his 1965 "sci-fi" film Alphaville by conceiving a vision of the future simply by defamiliarizing the present. Paris is hit by fallout from a nuclear bomb 120,000 meters above ground, but the effects of this apocalypse are mental rather than physical; Paris still looks like Paris, not some bombed-out sub-Third Man-like ruin. Human emotion is the main casualty, as the nameless main character (Jean-Marc Bory) notices people acting more robotically and inexplicably ingesting more pills; this brief 20-minute film is thus appropriately arid and detached in style. Still, it's startling to see how eerie even the present can feel in a film that is ostensibly about some faraway future. Of course, Godard would run with that idea in Alphaville...and beyond. Because, I mean, what is a film like Two or Three Things I Know About Her (1967) about if not the broad idea of deconstructing and examining the environments in which we all live?
2. Lettre à Freddy Buache (1982): Having been commissioned to make a documentary film commemorating the 500th anniversary of Lausanne, Switzerland, Godard then came up with this 11-minute short, one which amounts to a "videotaped refusal" to fulfill the assignment. To the hypnotic strains of Ravel's "Boléro," Godard lays out his reasons for not going through with the assignment with an intriguing marriage of sound and image. Allowing his camera to roam freely over various landscapes, both scenically splendid and dreary, Godard, providing running voiceover commentary, ruminates on what he perceives as the shortcomings of the documentary form to truly dig deep into what makes Lausanne and its inhabitants tick. Perhaps, he ultimately concludes, fiction provides a better entryway into the essence of this town...because, as he says towards the end of this incredibly dense short subject, "cities are fiction"—merely a state of mind. (You can view Lettre à Freddy Buache on YouTube here.)
And finally, here is a clip featuring Godard from Wim Wenders's 1982 TV film Room 666, in which Wenders, during the 1982 Cannes Film Festival, invited various directors to discuss their views on the future of cinema in front of a solitary camera set-up. This segment closed out yesterday's program, and it's startling how much of what he says is still pretty relevant today, especially his thoughts of film versus television. But I'll let Godard do the talking:
***
Though I've heard bits and pieces of Mozart's famous opera The Marriage of Figaro over the years, only last week did I finally listen to the whole thing, from start to finish, recitatives and all. It's pretty terrific, though my enjoyment of it doesn't stem so much from its undoubted human-comedy aspects. No, for me, it's basically all about the music, some of Mozart's wittiest, most lyrical and creative musical inventions.

Here's a video clip of perhaps my favorite number of all: Figaro's teasing mockery of army life in the closing number of Act I, "Non più andrai," here with Ruggero Raimondi playing Figaro, Frederica von Stade as the increasingly flustered Cherubino and James Levine leading the Metropolitan Opera Orchestra, from 1985:


For those who are interested: I listened to the 1955 Decca recording with Erich Kleiber leading the Vienna Philharmonic Chorus and Orchestra, featuring Cesare Siepi as Figaro and Hilde Gueden as Susanna. It's a wonderful performance—and not bad-sounding recording at all, considering its age. At mid-price, it's worth picking up. 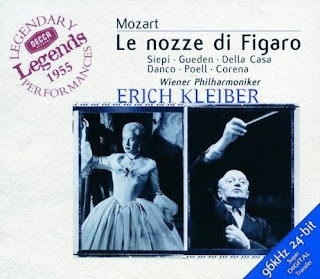 ***
And finally, on a more personal note: congratulations to Mike and Ally, a couple of Rutgers friends, both of whom recently got engaged to each other. But the road to that engagement was, um, not a smooth one, to say the least. So convoluted it was, in fact, that a friend of theirs (and also a friend of mine) put together a four-part video series detailing the twists and turns leading up to the engagement. I found this so entertaining that I figured it'd be worth sharing with all of you.

Here, in all four parts, is the "Most Epic Proposal Ever." I think it'll be worth your while. But being that friends of mine are involved in this, maybe I'm biased:

Thanks, Kenji, for the shout-out to the blogathon. I posted it this morning as our closing "argument."

Much appreciated, Marilyn, thank you!

Kenji: I enjoyed the whole posting. I was lucky to see "The Crowd" once in a theater. I'm glad you liked "La Nozze di Figaro." Look for Ingmar Bergman's film of "The Magic Flute." Very good.

Thanks Joe: I've heard a lot about Bergman's "Flute," am looking forward to eventually making its acquaintance. First, though: I really need to see more operas in public performances!