EAST BRUNSWICK, N.J.—I am currently working on a video summing up some of the highlights of my trip to Los Angeles. I'm not in a mad dash to finish it—trying to find time to complete it while handling my daily Wall Street Journal duties obviously makes it difficult to churn out a video as quickly as I might like—but I think it's come along nicely; so far, I've covered a little more than half of what I did over there. Once I'm done with it, of course, I'll post it up and link you all to it.

In the meantime...once again, I find myself with a boatload of movies I've seen yet have not written about here at My Life, at 24 Frames Per Second. So, while people are either exulting or cursing the final two-and-a-half hours of "Lost"—which I have seen not a single episode of—here are a few short takes on some of the stuff I've seen recently. 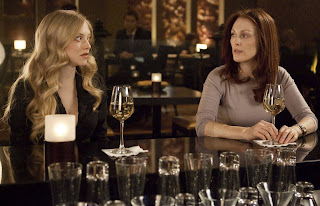 I think film critic Jonathan Rosenbaum is right when he suggested at his website a couple months ago that the real subject of Atom Egoyan's latest film, an American remake of a 2003 French film starring Emmanuelle Béart, isn't its titular escort played by Amanda Seyfried—Chloe is conceived more as a sensual-then-threatening presence than a fully fleshed-out character—but on Catherine Stewart, the character played by Julianne Moore, a middle-aged woman who suddenly finds herself thrust into a midlife crisis as she become suspicious of her husband's (Liam Neeson) fidelity. Moore's achingly soulful and beautifully detailed performance is the real star of the show here, to the point that it doesn't bother me all that much that the second half of the film veers dangerously close to campy Fatal Attraction-ish territory. Besides, I don't think it ever quite gets to that level—Egoyan's filmmaking is too measured and intelligent, and his empathy for Catherine's emotional confusion too deep, to be easily laughed at however risible some of the later plot twists become. It's no masterpiece—its ending in particular feels a bit too rushed to be as resonant as it clearly wants to be—but it's more intriguing and affecting than you'd expect. 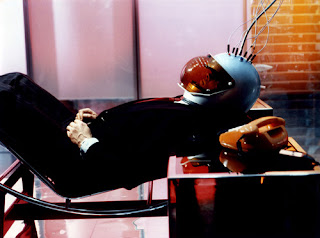 This two-part TV miniseries by the famous (and famously prolific) German director—an adaptation of Daniel F. Galouye's influential novel Simulacron-3—was first broadcast in Germany in 1973 and maybe screened only once in the U.S. until last month, when it played a widely publicized week-long run at the Museum of Modern Art in New York. That's where I saw the film—at least, after waiting on a rush line for an hour and hoping and praying I wasn't too far back in the line to be turned away. Boy, am I so glad I was not! What an endlessly inventive and intellectually stimulating film this is: the kind of great science fiction that momentarily makes you wonder about the world around you—what's real, what's a simulacrum, and the like—while not shortchanging visual and human interest.

Perhaps even more fascinating than what Fassbinder puts up on the screen are the influences one can sense in sci-fi films that both preceded and followed World on a Wire: Alphaville (1965), 2001: A Space Odyssey (1968), Blade Runner (1982), Total Recall (1990), The Matrix (1999). But could Wong Kar-Wai, of all directors, have picked up something from Fassbinder too? The proliferation of mirror-reflection shots in World on a Wire, to my mind, greatly recall similar ones in Wong's In the Mood for Love (2001) and 2046 (2005). Fassbinder's sensibility, of course, is far cooler than Wong's superheated romanticism—but maybe they're not so far apart after all: At the conclusion of this majestic sci-fi epic, love wins out in the end, in its own way.

(World on a Wire is not yet available on Region 1 DVD, but it is available from the U.K. on Region 2 DVD, if you're equipped with a region-free DVD player.) 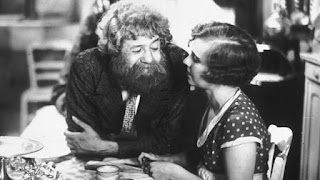 It is commonly accepted wisdom by now that French director Jean Renoir was by nature a humanist; Boudu Saved From Drowning—which I saw for the first time, in a less-than-stellar but serviceable print, during Brooklyn Academy of Music's extensive Renoir retrospective—complicates that popular critical wisdom just a bit, so slashing is its attack on societal class divisions. Here, Mr. Lestingois (Charles Granval)—a bookseller who is cheating on his wife (Marcelle Hainia) with the maid (Sévérine Lerczinska)—rescues the extraordinarily rude and unkempt Boudu (Michel Simon) after Boudu attempts to drown himself (in a fit of despair after losing his dog), and he wins acclaim as a good Samaritan for his act of charity. Turns out, though, that Boudu isn't particularly thrilled about being rescued, and he—not intentionally, perhaps, but as a result of his own nature—proceeds to wreak havoc on the already tenuous harmony of his well-meaning host family in anarchic and hilariously wrong ways. Though Renoir doesn't stoop to painting the members of the Lestingois household in broad, stick-figure strokes—that kind of deck-stacking wasn't Renoir's way—it's Michel Simon's uproarious gruffness and the character's utter refusal to conform to middle-class standards of decency that gives the film its potent subversive charge.

Perhaps the greatest achievement of Boudu Saved From Drowning is that Renoir dares to suggest that even a resolutely lower-class tramp like Boudu has a certain amount of dignity; all those critics who go out of their way to praise films like Precious that turn poverty into some kind of undignified horror show—could probably stand to rewatch this masterpiece as a refresher.

(Boudu Saved From Drowning is available on Criterion Collection DVD.) 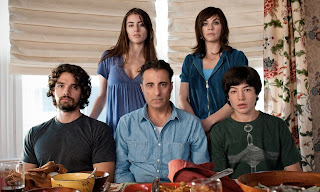 Despite the Audience Award it won at Tribeca Film Festival last year, City Island's the alleged charms were lost on me early on with the film's first family-around-the-dining-table scene—a terrible piece of writing that suggested writer-director Raymond De Felitta didn't know how to announce that the Rizzo clan was so majestically dysfunctional unless that dysfunction was dialed all the way past the point of any recognizable human behavior. The film only gets more graceless from there; I didn't expect any movie in the dysfunctional-family-comedy sweepstakes to actually make me think back fondly on Little Miss Sunshine, but that 2006 faux-indie Sundance sensation is a marvel of exquisite subtlety and nuance by comparison, with quirks you could accept and characters you could halfway believe compared to the wearying sitcom antics of City Island.

On the bright side, City Island—a real seaport community in New York—does look like a lovely place to visit; credit cinematographer Vanja Cernjul for some attractive pictorial lensing. And Andy Garcia, playing the patriarch who harbors secret dreams of being an actor, does have one brilliant moment worth witnessing: the scene in which he goes on his first audition and ends up blowing both the judges and himself away with his improvisation. If you can somehow find a way to watch that scene and skip the rest, you'll have seen all you need to see from this dud.

Still to come: the art-house exploitation sensation The Human Centipede (First Sequence), the Argentine Oscar winner The Secret in Their Eyes, the prankish art documentary Exit Through the Gift Shop, and more...including, maybe, a whole days' worth of Matthew Barney (if I can make it through that whole days' worth).
Posted by Kenji Fujishima at 5/24/2010 12:01:00 AM