As he wrote in June 2006 to kick off his "Opening Shots Project":

Any good movie -- heck, even the occasional bad one -- teaches you how to watch it. And that lesson usually starts with the very first image. I'm not talking necessarily about titles or opening sequences (they're worth discussing, too -- but that's another article); I'm talking about opening shots. As those who have been reading Scanners (and my Editor's Notes on RogerEbert.com) know, two of my cardinal rules for movie-watching are:

1) The movie is about what happens to you while you watch it. So, pay attention -- to both the movie and your response. If you have reactions to, or questions about, what you're seeing, chances are they'll tell you something about what the movie is doing. Be aware of your questions, emotions, apprehensions, expectations.

2) The opening shot (or opening sequence) is the most important part of the movie... at least until you get to the final shot. (And in good movies, the two are often related.)

The opening shot can tell us a lot about how to interpret what follows. It can even be the whole movie in miniature.

The project, then, was all about picking apart a given film's opening shot and what it suggested about the rest of the film that followed.

Apparently, it's an ongoing project, although the last contribution to it was posted on Scanners in August of last year (if I'm not mistaken). Well, then, allow me to pick up the slack here on my blog, with the opening shot of Pedro Costa's beautiful Colossal Youth (2006): 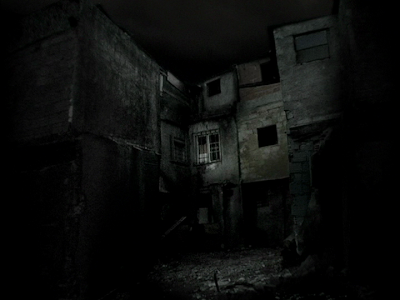 I've only recently gotten myself acquainted the work of this Portuguese auteur, thanks to The Criterion Collection's recent "Letters from Fontainhas" box set featuring his three films—Ossos (1997), In Vanda's Room (2000) and Colossal Youth—set in Fontainhas, a deteriorating slum community in Lisbon, Portugal. Despite the acclaim for Costa in art-cinema circles, until I finally got around to seeing Colossal Youth on DVD yesterday morning, I can't say I was bowled over by my first two acquaintances with his fiercely personal style. Ossos struck me as little more than a better-shot example of pieces of condescending indie miserablism like, say, Ballast (2008), Frozen River (2008) or Fish Tank (2009); and In Vanda's Room, though less determinist and more formally exploratory, still felt too long and too detached for me to embrace, at least on an initial viewing.

But in Colossal Youth, Costa had me right from its opening shot, a still of which is shown above. It's a wide shot of a run-down apartment building in Fontainhas at night—and the way Costa (credited as cinematographer with Leonardo Simões) captures the building in that shot, the building takes on an exquisitely eerie, spectral, haunting quality.

One source of that quality may be technological: as he did in In Vanda's Room, Costa shot Colossal Youth in digital video, and he doesn't try to hide the video noise any more than David Lynch hid it in his 2006 DV epic Inland Empire. Oddly enough, however, the noise adds a certain dreamlike quality to his images that clearer HD video might not have been able to reproduce, at least inherently.

But perhaps the real source of the beauty of this opening shot is in its chiaroscuro lighting, which, by emphasizing pitch-black shadows and limiting the amount of light in the image, imparts a sense of hushed mystery to the setting—a sense of tranquility that is brutally rattled by the sounds of objects hitting the ground from a second-floor apartment window: 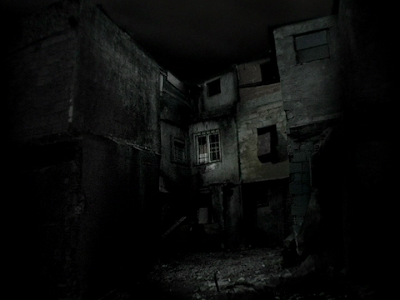 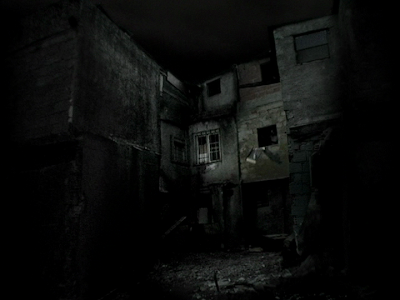 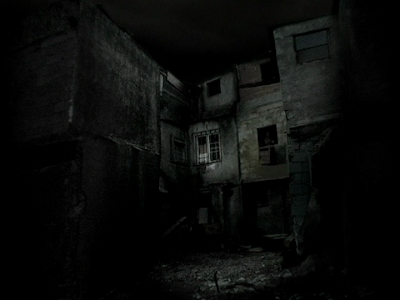 On a literal level, the opening shot sets up the film's "plot," such as it is. In the next shot, we discover the identity of the woman throwing furniture out of the window: Clotilde, the wife of the film's protagonist, Ventura. After trashing their apartment, Clotilde leaves Ventura, setting up his aimless but strangely mesmerizing quest to catch up with a past that even he himself is trying to piece together.

But this opening shot foretells much about the film's style as well. Pitch-black shadows and limited light sources become a regular feature in Costa's images, to the point where, as film critic Ryland Walker Knight has noted, light itself becomes a character in its own right, whether bright... 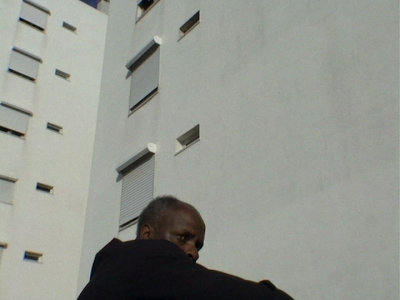 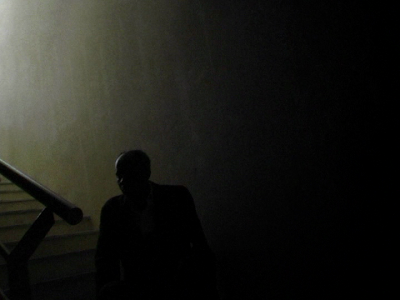 And Costa's selection of a fairly lengthy wide shot to kick off the film announces the aesthetic of literal and emotional distance that he will explore throughout the film's 155-minute running time.

I will leave the rest of the film's splendors for you all to discover, because that opening shot is just the tip of a very deep iceberg. For now, all I'll say is that, for all the distance Costa's august and ruminative style imposes on the material, Colossal Youth is a deeply moving motion picture, haunted and haunting in its vivid depiction of one man's attempt to reconnect with the past even as the present moves onward and the future looks bleak. But its pained humanity and near-surreal beauty offers its own measure of hopefulness amidst all the spiritual and literal dark.
Posted by Kenji Fujishima at 5/08/2010 12:01:00 AM