Boxing the World Away 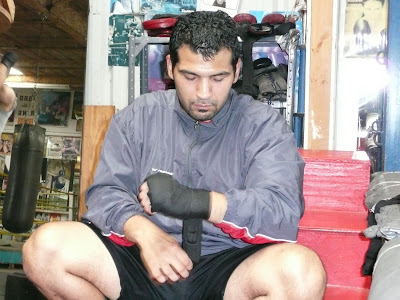 Well, hey, which bored-with-his-current-line-of-work wannabe film journalist wouldn't jump at the chance to interview legendary documentary filmmaker Frederick Wiseman? That was my line of thinking when the opportunity to do so pretty much fell into my lap last week, and that is the basis for my latest contribution to The Wall Street Journal's Speakeasy blog, posted today on the heels of the release, starting tomorrow at IFC Center, of his latest film, Boxing Gym (2010). Putting aside my slight dissatisfaction with the way this came out (mostly because I don't think I asked very interesting questions to begin with), I hope that a) you do go see this movie, which, as I noted here, was one of my favorite films of this year's New York Film Festival; and b) this piece sheds some kind of extra light on the film and the process behind making it.

P.S. As far as Frederick Wiseman films go, I've really only seen three of them: this one; his previous film, La Danse: The Paris Opera Ballet (2009), which I reviewed on this blog here; and High School (1968). (Alas, so far I've completely missed out on the Museum of Modern Art's ongoing Wiseman retrospective; there are two more months of it left, though, so maybe I'll try to fit in one or two more before the series ends.) On the basis of those films, though, and on the basis of this phone interview with him, I am starting to wonder if Wiseman isn't, after all, the documentary filmmaker of my dreams. As he himself said, no, his films are not necessarily objective—no work of journalism is, really, however much that may be the aim. But they are far more observational and fair-minded than seems to be the norm in documentaries these days, with blatant agenda-driven filmmaking (anything by Michael Moore, for instance; or even Charles Ferguson's Inside Job, to a certain extent) and "is-it-real-or-is-it-fake" stunts (Banksy's Exit Through the Gift Shop, Henry Joost & Ariel Schulman's Catfish) seemingly hogging all the attention. Wiseman may not judge other documentary filmmakers based on their approaches, and I myself try not to...but I have to say, given the choice between Wiseman's humane exploration and Moore's near-bullying (if sometimes genuinely thought-provoking) partisanship, I know instinctively which approach I personally prefer. But that could just be the journalism student in me speaking.

Boxing Gym was one of the pleasant surprises of this year's London Film Festival for me. I loved the simplicity and purity of Wiseman's approach, and the way he captured the sense of community shared by those who frequent the gym. I also really like the way he focuses on process, and on the often repetitive work that fighters go through as they hone their craft. There are parallels there with La Danse and it gives Boxing Gym an absorbing sense of rhythm.

Agreed Philip. I admittedly had considered this minor Wiseman when I saw it at New York Film Festival, but it's growing in my estimation the more I think about it.