NEW YORK—During the latter half of South by Southwest, the Austin Convention Center housed the SXSW Trade Show, in which a whole bunch of exhibitors displayed their sites, apps and other digital technologies. I walked through a part of the trade-show floor one of those days and came across a company named Pro8mm, a Burbank, Calif.-based company specializing in Super 8mm and Super 16mm film. One of the ways they were promoting Pro8mm was by allowing people to take one of the film cameras they had available and, arming all of them with both 200 feet of actual Super 8mm film and a quick tutorial in how to use the camera, let them roam around and outside the Convention Center to shoot about 2½ minutes of footage.

I had never actually shot anything on film before, so this intrigued me. Thus, a couple days after I had walked past the Pro8mm stand, I came back to give it a shot.

This is the result of my experimentation:


I have to say, I find seeing all that film grain in something I shot quite pleasing to my eyes. I also have to say that trying to shoot handheld footage with a film camera can be quite a challenge. Those cameras are quite bulky! I can see why so many filmmakers, both young and old, are turning to digital cameras; supposedly they are just easier to use.

Anyway, hope you all enjoy the footage I shot! The video above doesn't technically represent the sum total of everything I shot; I cut out about eight seconds of footage of me pointing the camera at myself as I walked in the Austin Convention Center, because I forgot at the time that film cameras, unlike video cameras, don't actually record live sound. (I had a digital voice recorder on me at SXSW, so I could have used it if I had remembered that! Oh well; I think this silent footage still has considerable analog charm anyway.)

Pro8mm, by the way, in addition to sending me a CD with a digitally transferred .mov file of my Super 8mm footage, actually sent back to me the original roll of film I shot! 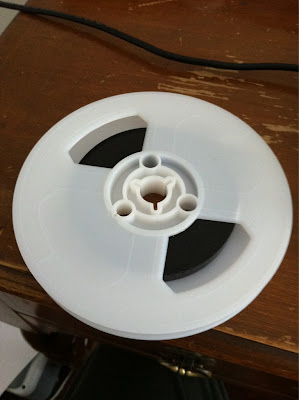