Self-Promotion Alert! New Writing and Video from Yours Truly 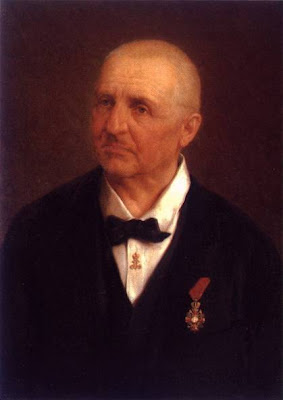 Tonight, the Cleveland Orchestra comes into town with their music director, Franz Welser-Möst, for a series of four concerts juxtaposing four symphonies by the Austrian late-Romantic composer Anton Bruckner with works by American 20th-century composer John Adams. Apparently, Welser-Möst, at least based on a short video interview I saw with the maestro on this site, sees a progression from Bruckner's penchant for symphonic patterns and repetition to Adams's brand of dynamic minimalism. It's an interesting premise, and I'm looking forward to hearing some more of John Adams's music through these concerts, if only to figure out where exactly I stand on the composer's music (I admire On the Transmigration of Souls—his Pulitzer Prize-winning evocation of Sept. 11—and absolutely love the music of his featured in the soundtrack of the film I Am Love; his score for the opera Nixon in China, on the other hand, struck me as chilly, inexpressive and unworthy of Alice Goodman's brilliantly poetic libretto). But the main draw for me is the chance to finally hear the music of one of my favorite composers, Anton Bruckner, performed live.

To mark the occasion, I wrote up this brief preview of these concerts for The House Next Door...although, really, I just wanted to write about Bruckner, and also take an opportunity to express one of the thoughts I've had in my head regarding Terrence Malick's The Tree of Life: that, in some ways, Malick's latest near-masterpiece is perhaps the closest I've come to experiencing the feeling of a Brucknerian adagio—in both its sense of lyricism and in its epic length—in cinematic form.

Enjoy...and then go find some recordings and listen to some Bruckner! You may well have a life-changing experience with them. (Herbert von Karajan's various recordings of Bruckner's symphonies are generally a sure bet, if you're looking for record recommendations.)


***
On a completely unrelated note...I have a new video up on YouTube! It's kind of a strange one, too, actually.

Let me explain...
A few weeks ago, while sitting at my desk here on the sixth floor in the News Corp. building, I and everyone else in the immediate vicinity started hearing what sounded like drilling noises above us. It seems some construction crew didn't get the memo that there were still people in the office after 5 p.m.? In any case, I and others around me found it incredibly annoying...but hey, what were we going to do? We all had stories to edit. (Well, the others had stories to edit, at least.)
After a while of hearing this buzzing noise, though, I started to allow my mind to free-associate a bit and found my mental wanderings gravitating toward a really random collection of sounds/noises: a scene in Pulp Fiction, some of the electronic soundscapes of Japanese composer Ryoji Ikeda that I had been listening to recently, and the famous opening of Richard Strauss's tone poem Also sprach Zarathustra (you know, the majestic music that opens and closes Stanley Kubrick's 2001: A Space Odyssey).
I decided to turn all of these, plus a few appropriate noises courtesy of iMovie, into a video that's meant to be a playful representation of said free-associational mental wanderings.
I guess you could call this my attempt at an experimental short film? Maybe? Feel free to let me know if the experiment was a success or just a stupid waste of my time and yours.
Posted by Kenji Fujishima at 7/13/2011 06:30:00 PM