1. Kay Francis...daaaaaamn! She makes craven materialism sexy in Jewel Robbery alongside the ever-debonair William Powell, but she shows more emotional depth in a similar character in the classic Trouble in Paradise. Either way...she's smokin'! I mean, just look at this photo: 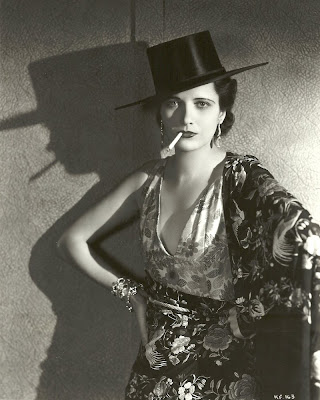 2. The Bowery is by far the burliest and manliest of the pre-Code films I saw at Film Forum, dealing as it does with a rivalry between two (real-life) blowhards, Chuck Connors (Wallace Beery) and Steve Brodie (George Raft). It's also the most blatantly racist; it opens with references to "chinks" and "coons." But, of course, that was probably merely a reflection of its 1890s New York setting. For all that, it's all still pretty lively and entertaining. (This, by the way, is the first Raoul Walsh film I've seen. If all of his films are as full of testosterone as this, then sure, sign me up on the bandwagon!)

3. I had never seen Mae West in a film before seeing She Done Him Wrong. Now that I have...is it just me, or is there a numbing sameness to West's delivery of her admittedly clever lines that gets a bit grating after a while? Not all of her lines of dialogue sexual innuendo, but West apparently delivers just about every single line as if it were. (I'm assuming her performance in her other big film of 1933, I'm No Angel, is no different?) Personally, I found Sherman's film—an adaptation of a play West herself wrote—more interesting for Cary Grant, here in one of his earliest roles playing a not-too-characteristic Grant role...at least, not until its ending.

"Taking Head," all films screened at Anthology Film Archives in New York
★ Italianamerican (1974, Martin Scorsese)
★ American Boy: A Profile of Steven Prince (1978, Martin Scorsese)
★ Numéro Zéro (1971, Jean Eustache)
★ Fengming: A Chinese Memoir (2007, Wang Bing)
All of these films are basically extended filmed interviews with one or two subjects. That doesn't sound too cinematic, does it? And yet...

The two short Scorsese documentaries—the earlier one about his parents' immigrant histories, the later one about a close friend and heroin addict—are the ones that feel the most like actual movies, Scorsese more than willing to illustrate certain moments in the interviews with cutaways to archival footage or still photographs. The Eustache and Wang films, however, deny viewers even the comfort of such conventional cinematic qualities, focusing almost entirely on their respective interview subjects as they talk, reminisce and emote. Both could arguably be just as effective as radio plays or audio books, but seeing the interview subject face-to-face does admittedly add a visual dimension—the possibly of scrutinizing a face as their words spew forth—to the enterprise that you wouldn't get from just hearing them.

Numéro Zéro, by dint of occasional bits of self-reflexive business—most memorably, a clapboard Eustache occasionally trots out during his interview with his grandmother to mark each reel change—comes the closest to turning into one of the film's main subjects the question of the validity of the talking-head approach as cinema. Wang Bing goes the other way in Fengming, however, and adopts an unobtrusive aesthetic of long takes and still camera set-ups that could almost be considered "literary," since it gives near-complete prominence to Fengming's words, trusting that her sometimes harrowing anecdotes will be enough to carry the film for all of its whopping 186 minutes.

I'm glad to have seen all four films, and the interview subjects are usually compelling enough to ride past questions of whether what we are watching are actual movies as opposed to merely filmed radio plays or audiobooks. Frankly, though, after seeing all of these films in close proximity to one another, I feel ready to swear off talking-heads documentaries of this type for a while.

American Boy, by the way, is especially worth seeing to hear Steven Prince recount an anecdote that would eventually become the famous needle-in-the-heart scene in Quentin Tarantino's Pulp Fiction.


"Robert Ryan," all films screened at Film Forum in New York
★ Crossfire (1947, Edward Dmytryk)
★ The Set-Up (1949, Robert Wise)
Ah, Robert Ryan. I usually give less thought to actors in films than I'd like to admit, but Ryan is one major exception—I always look forward to watching his coiled intensity in any film he's in. So I was excited to see that Film Forum was programming a near-complete retrospective of his work.

Crossfire is marred a bit by a turn toward heavy-handed preaching in its last act (in which Robert Young, playing a detective, lectures a young soldier about how discrimination is baaaaaad), but it's not enough to detract from the pungent atmosphere of Dmytryk's moody visuals (courtesy of director of photography J. Roy Hunt) and Ryan's chilling portrayal of an anti-Semitic soldier. He gives a richer performance in The Set-Up, though, as a down-on-his-luck boxer looking, just once, to relive some of his past glory. I had seen Wise's film previously on DVD, but revisiting it on a big screen Friday, I found it even better than I had remembered—a truly great film without reservations. (Plus, for all you 24 fans out there who think Kiefer Sutherland & co. pioneered the real-time format, here is arguably the earliest example of "real-time" cinema, with 72 minutes of screen time corresponding 72 minutes of diegetic story time.)

Here's to more Robert Ryan goodness in the coming weeks!

Actually, I do think Deodato's infamous exploitation film has genuine points of interest beyond its notoriety as an extreme gross-out. It's an early precursor to The Blair Witch Project, with its second half consisting mostly of footage of a bunch of unprincipled documentary makers exploiting Third World tribesmen for the sake of "entertainment." They end up getting their just desserts—but does the bloodlust this narrative inspires in us suggest that we in the audience are not that much better than the people on the screen? ("I wonder who the real cannibals are," star Robert Kerman didactically asks in voiceover as the film ends with a shot of the building in which I work.) Or is that just a cover to add a spurious intellectual patina to the filmmaker's own disgusting imagination? Me, I find the film fascinatingly thorny and genuinely thought-provoking in that regard; others will find Cannibal Holocaust indefensibly hypocritical and vile. It may well be an artistic failure (my ambivalence is reflected in the absence of a recommending star next to the title), but for those who are brave enough to try it, I honestly think it is worth experiencing...once, at least. (Those who are sensitive to animal cruelty, though, will probably want to avoid this movie altogether; animals were definitely harmed during the making of this film.)

Music
★ 劉美君 (1986, 劉美君)
Sorry, Shirley Kwan, but Prudence Liew—another Cantopop singing star from the 1980s—has officially captured my imagination more than you did in your first two albums. Here's a voice that isn't pretty in the conventional sense; "no-nonsense" might be the best way to describe it. But it feels almost soulful in spite of, or maybe because of, its occasional bits of awkwardness. Plus, she seems to have a thing for jazzy rhythms and harmonies, as the last two tracks of this legitimately great debut album most explicitly indicate (and which her later albums bear out more extensively). That's always a plus, in my book. Nevertheless, this album—still her most popular—is remembered mostly for its first track, "最後一夜 (The Last Night)" an evocative, dark-toned dance song that remains her best known hit. Check it out (if you're willing to put up with the blurry video quality):


★ David Bowie (1967, David Bowie)
I may not have been crazy about the Bowie-led The Man Who Fell to Earth when I saw it at Film Forum weeks ago, but Nicolas Roeg's film did, at the very least, re-awaken my interest in finally delving into Bowie's recorded musical output, of which I have only superficial familiarity beyond some of his major hits (plus Seu Jorge's Brazilian covers in Wes Anderson's The Life Aquatic with Steve Zissou). As usual, I started at the beginning with his eponymous debut album, a collection of theatrical-sounding numbers that bear only passing resemblances to the shapeshifting glam-rocker we would all get to know in the 1970s. Still, these songs are never less than tuneful, and some of them, like "We Are Hungry Men," are just straight-up bizarre—in a good way, of course. An interesting listen.