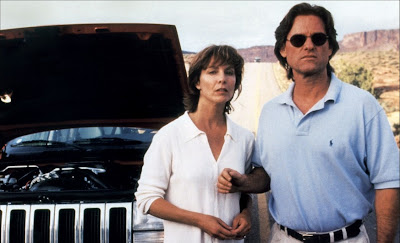 For the most part—in its first half, especially—Jonathan Mostow's thriller has the lean, brutal efficiency of a B-movie thriller from the 1930s and '40s, crossed with the elegant widescreen framing and attention to landscapes of a Sergio Leone spaghetti Western. The characters aren't developed much beyond standard archetypes—with Kurt Russell and Kathleen Quinlan playing all-American yuppies (with the distinctly unremarkable names of Jeff and Amy Taylor) who, while on a cross-country trip moving to San Francisco, eventually cross paths with a band of ruthless redneck villains led by the genuinely menacing Red Barr (J.T. Walsh)—but they're sketched in with some welcome detail by the actors embodying them, so that you find yourself as drawn into the human drama, so to speak, as much as you are thrilled by the action, which includes all sorts of beautifully orchestrated cat-and-mouse mayhem with cars, trucks and even a child wielding a rifle.

It's all wrought so skillfully and paced so breathlessly that I suppose it'd be churlish to lament the much richer film that Breakdown occasionally (very occasionally) suggests it might become but never delivers on. When Earl (M.C. Gainey), playing one of Walsh's henchmen, taunts Jeff at one point about his yuppie-ness, there is, briefly, the suggestion of class resentment fueling the behavior of these baddies—a promising hint of social commentary that's entirely dropped once Jeff turns the tables on his tormentors, as Hollywood formula dictates he must. And what at first looks to be a subversive attempt to humanize Red when Jeff follows him to his family home ends up basically going for nought once Jeff wreaks his expected havoc in trying to rescue his wife from near death. Maybe it's only fitting, then, that the film ends with a curlicue of nastiness involving a truck dropping from a bridge without so much as a comment on whether such a gruesome gesture was ever necessary in the first place. The audience is prepared for the villain's comeuppance, and Mostow goes the extra mile to oblige.

As action craftsmanship, however, Breakdown is a breathtaking achievement—literally. It's been a while since I felt like I was actually on the edge of my seat from start to finish, and this film accomplished that feat brilliantly, the cumulative visceral effect akin to a coil ready to snap at any moment. If nothing else, if you want to know what Roger Ebert means by a Bruised Forearm movie, see this immediately. Just, you know, adjust your expectations accordingly.