BROOKLYN, N.Y.—This past week was the first one in which I tackled editor-in-chief duties at In Review Online, so much of my time was consumed by that. For that reason, I ended up not seeing too many movies—thus leaving it open for two startling pieces of experimental theater to pick up the artistic-consumption slack. 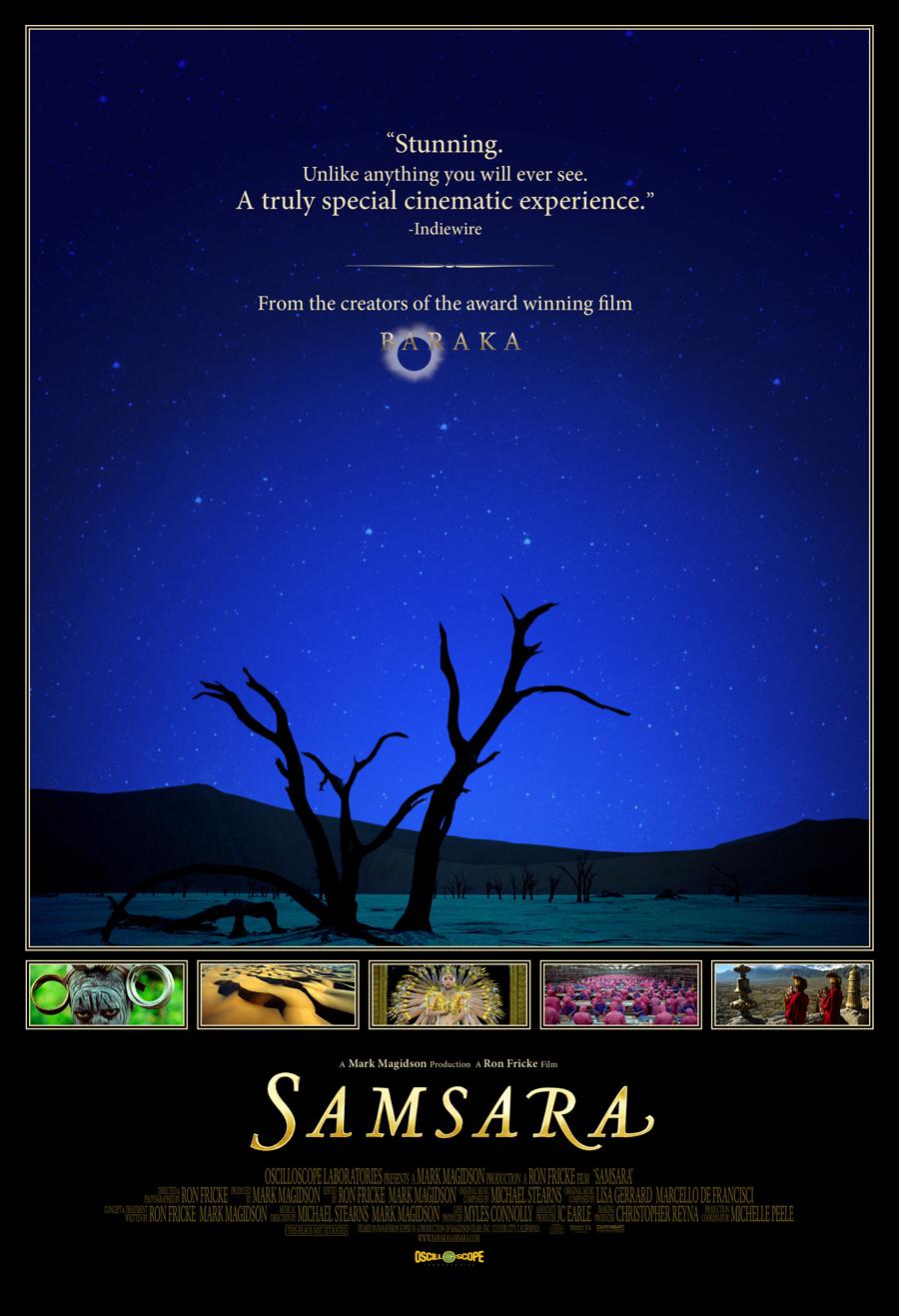 ★ Samsara (2011, Ron Fricke), seen on DVD at home in Brooklyn, N.Y.
As was the case with Baraka (1992), Ron Fricke's previous globe-trotting documentary epic, Samsara is an often astonishing mix of the profound and the facile. Ultimately, though, I think this follow-up cuts much deeper than its predecessor. It's still "a mile wide," still grounded in travelogue-like glimpses of exotic and modern cultures in its grand 70mm imagery. Instead of cheesy "we are one" sentiments, however, Samsara hones in on more specific, if no less broad, themes: life, death, birth, destruction, the differences between civilizations past and present. (Its opening pre-credits scenes lay out the whole movie, more or less: an exotic dance, an exploding volcano, an embryo, a preserved corpse.) Fricke is still as shallow as ever when it comes to trying to actually tackle human beings, especially in modern society: Its time-lapse footage of humans in assembly lines and wide shots of neon-lit city landscapes inspire a not-especially-revelatory sense of mechanized dread. (You can't get more clichéd, for instance, than that one cheap shot of morbidly obese American fast-food consumers downing their food—as if that was meant to represent the decline of Western civilization or something.) Once again, though, the Eisensteinian montage saves him, situating these momentary failures of taste and empathy in a more resonant wider context, as merely one piece of a larger societal/historical quilt. The sheer amount of food for thought that Samsara inspires in addition to its expected visual wonder is mind-boggling; one viewing is hardly enough to unpack it all.

★ The Central Park Five (2012, Ken Burns/Sarah Burns/David McMahon), seen at SVA Theater in New York
Here's another documentary I saw this past week, one that's far less aesthetically ambitious than Samsara but no less thought-provoking. I'm reviewing this for In Review Online (and since I'm the new editor-in-chief of that site, this is something I expressly chose to tackle) so you can read more about it when that piece goes up (by Friday, hopefully, when it starts a theatrical run at IFC Center here in New York). In spite of some regrettable pulled punches, it's worth your time, for sure.

Argo (2012, Ben Affleck), seen at Director's Guild Theater in New York
This is an entertaining thriller that one could also point to as a classic illustration of "This is why they hate us." It doesn't matter who "they" are in the viewpoint of a certain kind of self-absorbed American mindset; "they" are all just grist for a cinematic adventure of boy's-own derring-do. That's fine in, say, a big-budget Hollywood action blockbuster that doesn't pretend to allude to any recognizable real world. But when "they" are angry Iranians in the midst of a real-life event—the Iran hostage crisis, in this case—then it becomes rather more problematic. Granted, Argo does make brief gestures toward acknowledging U.S. involvement in getting some of its own into this particularly ugly situation, mostly through a few tossed-off lines of Aaron Sorkin-like "witty" dialogue and a half-animated opening sequence giving all of us a speedy overview of the history of U.S. involvement in Iran—all of which suggest a political complexity that is quickly brushed aside to focus on a mere sidebar to the main crisis: the rescue of six Americans from the Canadian embassy through a cock-eyed scheme involving the production of a fake Hollywood science-fiction epic. Though Ben Affleck never quite shamelessly overcooks the suspense like, say, Kevin Macdonald did in the gag-inducing finale of another based-on-true-events thriller The Last King of Scotland, the unexamined racist mechanisms are still basically the same: The Iranians become the implicitly villainous "other" preventing these six Americans, plus dour CIA "exfiltrator" Tony Mendez (Affleck, as stiff as ever), from their heroic escape. And what of those 52 hostages that remained in captivity for 444 days from 1979-'81? Well, you know, recreating a fictionalized version of that story and maybe exploring its political ramifications isn't nearly as "exciting" as being able to throw in tired jabs at the business of Hollywood in the midst of a story with a more uplifting ending.

★ Republic (1993, New Order)
★ Get Ready (2001, New Order)
★ Waiting for the Sirens' Call  (2005, New Order)
I think there's some fairly underrated music in these three later New Order albums. Republic—the first album released after the demise of their usual label Factory Records—has a certain vague sense of personal reflection underpinning its dance beats. Soon afterward, they would break up—only to reunite five years later, in 1998. With Get Ready, the first album after their reunion and eight years after Republic, Bernard Sumner & co. would go back to their Joy Division roots, deemphasizing electronics in favor of a relatively more stripped-down, lyrics-based aesthetic. Waiting for the Sirens' Call, in the context of New Order's entire career, then, has the feel of a summation, veering from guitar-oriented opening tracks to electronica and then back again, all wrapped up in lyrics that, as was also the case with Bernard Sumner's lyrics in Get Ready, are more direct and earnest than one might expect from this band—for better and for worse.

★ Natasha, Pierre & the Great Comet of 1812 (2012, Dave Malloy), seen at Ars Nova in New York
★ Roman Tragedies (2007, Ivo van Hove/William Shakespeare), seen at Brooklyn Academy of Music in Brooklyn, N.Y.
This past weekend, I took in two pieces of experimental immersive theater, both daring to place spectators within the same space as its performers. The results offered a fascinating study in contrasts. 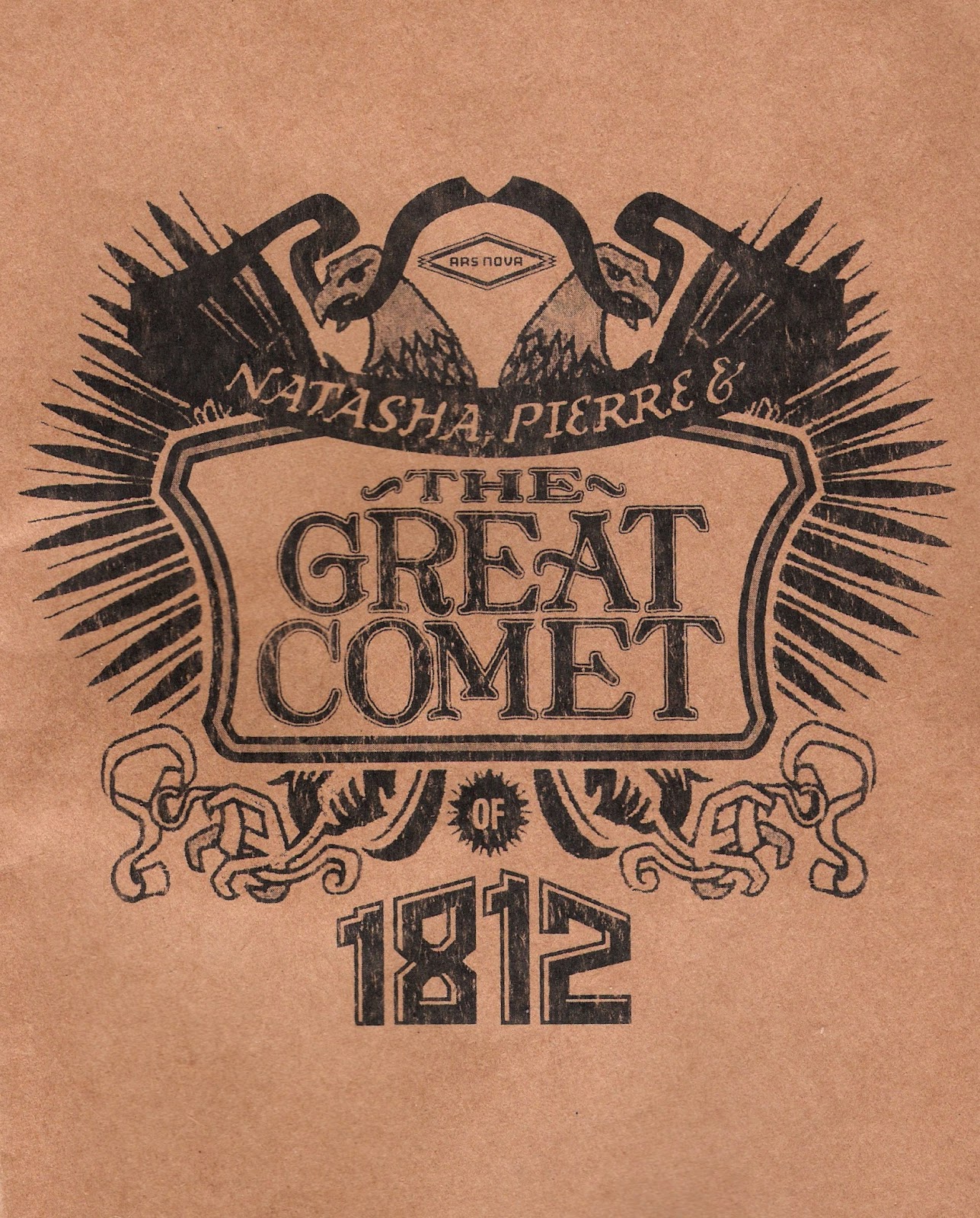 Imagine an electro-pop opera set in a simulated Russian speakeasy—with free vodka served, no less—that is based on a selection from Leo Tolstoy's epic tome War and Peace? That's composer-lyricist Dave Malloy's new work Natasha, Pierre & the Great Comet of 1812 in a nutshell. It gets off to a bit of a gruesome start with an ebullient opening number setting up the characters and situations in a way that suggests, none too promisingly, that this will just be a self-aware, ironic and hip modern updating of Tolstoy...but such suspicions are immediately, thankfully dashed once the plot gets underway. Turns out, the novelty of its immersive staging is hardly the only notable thing about it; the music and lyrics are constantly keyed into their characters' emotional states, and the staging only helps to bring us closer to these people and their tumultuous inner passions: Natasha's naivete, Pierre's cynicism, Anatole's callowness, and so on. The result is a musical that is as profoundly moving as it is theatrically and musically inventive...and damned if its ending—in which Pierre sees the titular comet and achieves the kind of unspoken epiphany that James Joyce would later make a regular feature of his fiction—not only reaches for transcendence, but actually achieves it.


Roman Tragedies—a six-hour conceptual theater piece involving consecutive abridged adaptations of three William Shakespeare tragedies, Coriolanus, Julius Caesar and Antony and Cleopatra—is a much chillier work...but of course it is, considering the dramatic material. Shakespeare depicted the political machinations and tragic flaws of these characters from an omniscient perspective, and so does Dutch theater director Ivo van Hove. One of Van Hove's major innovations with this century-old material, however, is to update it to our media-saturated political landscape while also retaining vestiges of the old Roman-arena theatrical style—politics as a ruthless, "survival of the fittest" Roman circus. To that end, the stage of Roman Tragedies is not only transformed into a kind of modernized Roman amphitheater, complete with huge jumbotron relaying what's happening on the stage; there are also television screens everywhere on set, as well as onstage cameramen filming the actors live. Oh, and did I mention that we spectators are allowed to actually go onstage and watch the action up close, either by watching the actors or by watching one of those many television screens? And that we're also expressly invited to live-tweet during the experience, if we so chose? And that below the jumbotron is a digital news feed of sorts offering headlines, broadcasting tweets and foreshadowing major characters' deaths (example: "395 minutes until Cleopatra's death") much like those bottom-of-the-screen tickers on news networks?

Roman Tragedies, in short, is filled to the brim with provocative stage gimmicks—but does this all add up to an interesting and resonant vision? I admit, there were large portions of Van Hove's show where I felt disengaged from the drama onstage and wondered whether this show was ultimately all concept and no heart. The more I mull over the whole experience, though, the more intriguing I find elements of that concept—especially regarding its audience-interactive elements. With many audience members taking photos of the actors and/or looking down at their phones during the performance, it lent a purposely vulgar sideshow element to what, in other contexts, are supposed to be serious dramas. How does this necessarily make us any different from, say, those onlookers who gawk and take photos of car crashes without actually, you know, doing anything to help the victims? In this way, Roman Tragedies dares to implicate us as well, forcing us to question our relationship to the action onstage—because, for all that we're allowed to get close to the performers onstage, we don't actually interact with them, and they don't interact with us. That fourth wall remains upright; physically, we're close, sure—but emotionally we remain mere plebeians to the machinations of those of supposedly higher rank.

All of that might have come off as impossibly alienating if it weren't for the actors, whose performances in the various roles are often vivid enough to cut through the barriers Van Hove purposefully puts in front of us and move us in individual moments. What stamina it must take these actors to maintain such a level of emotional intensity for the better part of six hours! Roman Tragedies is a deeply impressive feat of theatrical ingenuity and performance, and even if I ultimately found it to be more intellectually than emotionally engaging, I'm certainly glad I saw it. Yay for experimental theater!
Posted by Kenji Fujishima at 11/20/2012 09:00:00 AM