A Friday Full of Firsts

EAST BRUNSWICK, N.J.—Yesterday was yet another full day of firsts—and what a wonderful batch of firsts they were!

The day kicked off with my first-ever screening of Nicholas Ray's 1956 film Bigger Than Life, thanks once again to the IFC Center. Folks, if you haven't seen this classic yet and have only heard about it by its reputation as one of the key films of the 1950s, then rest assured, it lives up to that reputation and then some. Personally, though, my euphoria over the experience of introducing myself to Bigger Than Life on a big screen isn't so much over its content, of which much ink has been spilled over the decades. No, its real thrill, for me, was in seeing Ray's keen and endlessly imaginative compositional sense with the wide CinemaScope (2.35:1) frame projected in a large format.

CinemaScope—for those who aren't familiar with projection formats—was the anamorphic lens technology that became widely used in Hollywood films during the 1950s, in part as a response to the burgeoning popularity of television. Many critics argue, though, that the full potential for such a wide format wasn't fully realized until Nicholas Ray started shooting with the process, perhaps most famously in Rebel Without a Cause (1955). Certainly, I could sense Ray's smooth fluidity with the format throughout Bigger Than Life, which mixes in close-ups, medium shots and wide shots that always allow plenty of space around the human figures carefully situated within those shots. But it's the way Ray fills those spaces between the people in his shots that provide some of its most fascinating moments. Telling visual details abound in those spaces: the maps hung in the Avery household, a lamp hanging over the main character in a hospital room, and the like.

You know, in film classes at Rutgers, I certainly heard a lot about mise en scène—the arrangement of actors, sets, props and lighting in a given frame. But even after watching Jacques Tati's Playtime on DVD on more than one occasion, or even after watching the nearly complete oeuvre of Wes Anderson—films by filmmakers who make you pay close attention to their shots simply by filling them up with a sometimes insane amount of complex detail—I honestly don't think I've viscerally sensed the importance of mise en scène in a directorial vision until this theatrical screening of Bigger Than Life. Not only was I fully involved in—and yes, even at times horrified by—the travails of Ed Avery (James Mason) and his cortisone-inspired psychosis, but I also—for maybe the first time in a very long time, if not ever—found my eye frequently wandering all over Ray's widescreen frames, taking in all the details. (Maybe Rebel Without a Cause didn't have the same effect because I saw it on the far smaller dimensions of television?)

Right now, I'm really wishing I had a DVD of this film on hand to illustrate the kind of attention to visual detail—right down to seemingly meaningless props—that I'm talking about. Perhaps in the near future I'll do an image essay (or maybe even a video essay?) on Ray's mise en scène in Bigger Than Life. For now, though, I will say this: After coming out of the IFC Center midday, I felt, in the course of one single theatrical screening, that I had perhaps experienced a personal breakthrough as a film-watcher. It's almost as if I hadn't actually realized what mise en scène was until Ray shook me and opened my eyes. Certainly, at the next film I watched yesterday (more on that below), I found myself doing that same eye-wandering even within a narrower aspect ratio.

I mean it sincerely when I say that, after seeing Bigger Than Life on a big screen, I may never watch films the same way again. After giving thanks to Jean Renoir last week for the heartrending beauties of A Day in the Country, I now have to thank Nicholas Ray for summoning forth an arguably even more important revelation in the dark.

Oh, and as for the film's content, I offer this as criticism: For those who think Sam Mendes and Todd Field have cornered the market artistically in the sick-soul-of-suburbia melodrama, I strongly suggest finding a copy of the Criterion DVD of Bigger Than Life and seeing how such a melodrama can be done in a way that is harsh yet compassionate, not snarky and condescending. And yes, it's also more visually distinguished than any of those films (Mendes may have a taste for slick visual extravagance, but none of his images in American Beauty and Revolutionary Road come close to the soulful expression of Ray's). 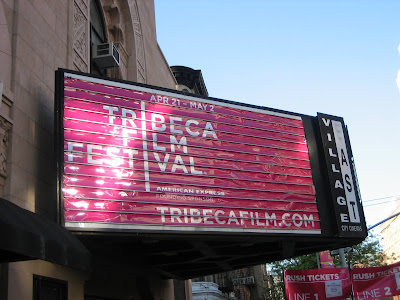 Believe it or not, until yesterday, I had never ever been to a screening that was part of New York's Tribeca Film Festival, which this year began this past Wednesday and is running until May 2. I'm not sure why this was the case; maybe, for all these years, I really didn't take this festival all that seriously in comparison to, say, the more widely celebrated Sundance, Cannes, Toronto or New York film festivals.
In any event, I decided I'd pop my Tribeca cherry and go to a screening this year. But, because I absolutely refuse to pay a whopping $16 for a regular-admission ticket, I decided to pick a film that would be showing during a matinee time—before 6 p.m. on weekdays—on a Friday, a regular day off for me; then, I'd only have to pay $8. And because I anticipate possibly having to stick around in East Brunswick this coming Friday, I decided that yesterday's 3:45 p.m. screening of up-and-coming Philippine director Brillante Mendoza's fourth feature, Lola (2009), would quite possibly be the only Tribeca Film Festival screening I'd be attending this year.
Alas, by the time I made this decision, I discovered that that particular screening, at Village East Cinemas, was sold out online. However, I still had a shot at getting into it by waiting on a rush line an hour before the screening's official start time. So, I decided to take a chance on it. And...
...well, it turns out that I was able to extend my recent rush-line hot streak yesterday afternoon after all! Yes I'm serious, folks; I have a streak going. I waited on a rush line last fall to get into a free preview screening of Tsai Ming-liang's Face and eventually found myself in an audience witnessing the great Taiwanese iconoclast's latest exhilarating mad folly (one which needs a U.S. theatrical release pronto). And just last week, I found myself standing on a line at the Museum of Modern Art to see the new 35mm restoration of Rainer Werner Fassbinder's two-part 1973 sci-fi television film World on a Wire; I successfully got into that screening, too, and proceeded to have my mind blown repeatedly for over three-and-a-half hours.
With Lola, make it three for three. 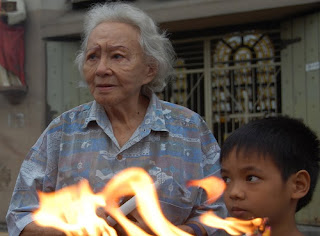 And in the worth-the-wait department, I consider myself three for three as well. I haven't yet seen Mendoza's previous feature, the graphically violent and controversial Kinatay—for which he won the Best Director award at Cannes last year, and for which he inspired the ire of an especially offended Roger Ebert—but Lola, more often than not, harks back to his wonderful 2008 film Serbis in the way it mixes a tough-minded economic critique with empathy and affection for its characters.
The two main characters here are grandmothers, both of them bound together by a murder, as one's grandson murdered the other's. (The film's title is, indeed, Tagalog for "grandmother.") Throughout the film, we observe both these devoted women try to do what they think is right by their grandsons; one gives his dead son a proper funeral even though it ends up costing them an arm and a leg, while the other goes to desperate lengths to scrounge up the money to reach a financial settlement with the other to drop the robbery-and-homicide charges against her grandson. They don't always act in the most honorable of ways, but Mendoza never loses sight of the loving impulses that drive their actions. He also once again evokes the squalid environment of the Philippines in visually and aurally brilliant ways, whether by shooting in long takes and wide shots to take in the lively environment around his characters, or overlapping his soundtrack to evoke a vivid sense of human hustle-and-bustle.
The end result is admirably unsentimental and often quite beautiful—very much worth a wider theatrical release in the future. (It also provides an unintentional but welcome riposte to Bong Joon-ho's Mother, a far less humane take on overly devoted parental figures.)
Mendoza himself was in attendance at yesterday afternoon's screening, and, in his modesty and soft-spoken nature, his demeanor seems to nicely match his directorial style. He was so generous that he allowed me to have a picture taken with him: 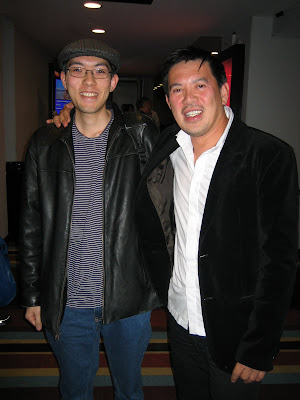 That's Mendoza on the right—and for those who don't know what I actually look like, yes, that is me on the left, with my newly purchased $10 beret. Just trying to perfect that artiste look and all. You like?
***

And last but not least: For the first time since I started checking in at locations via the location-based social-networking site Foursquare, the site actually helped me network with a couple of friends—one of whom had noticed I had checked in to Village East Cinemas for the Lola screening, both of whom were on their way at the time to see a rock concert at Gramercy Park last night—to arrange dinner plans right after the screening, which let out at about 6 p.m. If I had not checked in at the movie theater on Foursquare and thus sent an indirect alert to my friends, I probably would not have had any delicious (gluten-free) risotto at Risotteria—a small restaurant on Bleeker Street—tonight; I probably would have just gone straight home, thus closing out my Friday on a relatively duller, lonelier note. Not to say that my mother's dinner leftovers wouldn't have been delicious as well (I have to admit, my mother is not too bad a cook herself)—but I was in a particularly eager mood to close out my very good Friday with a bout of extra socializing...and thanks in large part to Foursquare, that desire became a savory reality.

Now if Foursquare would just fix its mobile-web site on my non-smartphone and not make me text check-ins all the time, we'd be golden.


***
Thus, my Friday—and with two excellent films, delicious risotto for dinner and some honest-to-God socializing done, a deeply satisfying Friday it was. After a rather dismaying end of the work week, I realize that I really need more days like this.
Posted by Kenji Fujishima at 4/24/2010 08:00:00 AM