EAST BRUNSWICK, N.J.—For this post—and, I hope, once every week—I'm taking a brief break from blogging about film and life in order to let you all in on some of the music I've been grooving to. Discovering new music—and by "new," I usually mean new to me, not newly released—is as much of a passion as discovering new films, so I figure I ought to make music a greater presence on my blog than I have done so far. We'll see how that works out.

For now, though, here is my notable discovery of last week: 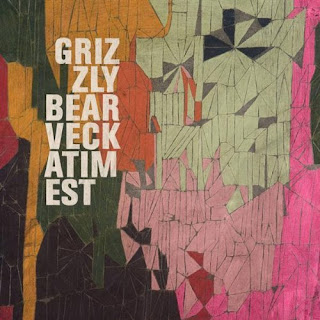 I finally got around to hearing this Brooklyn-based band's widely acclaimed third album Veckatimest last week, and my initial reaction to it was one of disappointed indifference. I didn't remember their second album, Yellow House (2006), to be this dour and joyless. Sure, Yellow House was hardly what you'd call a joyful romp, but I recall more immediately compelling color, variety and experimentation underlying its slow burn; Veckatimest, by contrast, seemed almost suffocatingly "atmospheric" and self-conscious.

However, I've listened to Veckatimest a couple more times since that first listen, and I think I've warmed to it a bit more each time. Yellow House may remain more bracing in its mixture of indie-rock and folk elements, and Horn of Plenty, the 2004 Grizzly Bear album that is technically more an Edward Droste solo effort, more memorable at evoking a distinctively low-key, creepy atmosphere in their sounds. Nevertheless, the band's stylistic ambition in Veckatimest—one which embraces choral and orchestral arrangements throughout—certainly cannot be denied, and sometimes that adventurousness yields some genuinely striking and attractive music. Maybe I'll eventually come around to embracing the whole thing (it took me a while, for instance, to come around to Radiohead's post-OK Computer albums, most of which—In Rainbows excepted—struck me as similarly arid upon first acquaintances).

"Two Weeks" seems to be the big hit from this album—it's been featured in many television episodes and commercials—and it's certainly a terrific song: a relatively upbeat number that sounds like a heavy-footed, slowed-down version of Maroon 5's "This Love" (sorry, but yes, that's the only point of comparison I could come up with at the moment). For my money, however, the best of the lot is "Cheerleader," one of the few instances where the band successfully melds the unsettling vibe of Horn of Plenty with the stylistic restlessness of Yellow House. Here, that restlessness manifests in a moderate dance beat and a sonic halo effect that suggests Droste hovering over guitars and strings all playing in their lower registers—appropriate in some ways for a song with lyrics that suggest someone looking down on another and advising: "God let it go, it doesn't mean a thing / Chance and sow, nothing changing."

And if nothing else, it's worth swimming through the drearier parts of Veckatimest to get to "Foreground," one of the most moving album closers I've ever heard.

Here's a video of a live performance of "Cheerleader" the band gave at South by Southwest last year: