Ode to a Lost Hat: An Image Essay About Hats in Movies

Two Sundays ago, at a small street fair in midtown Manhattan, I noticed a stand selling a whole bunch of caps at reasonable prices. One particular cap—a brown checkered beret—caught my eye, and I impulsively decided to buy it.

That week, I wore that hat almost every day; in fact, you all saw me wearing it a few posts ago in a photo taken with Philippine director Brillante Mendoza after a Tribeca Film Festival screening at Village East Cinemas. It was only $10. I thought it was—as Family Guy's Peter Griffin might say—a freakin' sweet deal.

Now—only a little over a week after buying that hat—it's gone. I carelessly left it on a NJ Transit bus as I got off at New York's Port Authority Bus Terminal, and it took me maybe five minutes after I had left the terminal to realize that I was no longer wearing that beret on my head.

The feeling of disappointment in this turn of events was...well, "crushing" is too strong a word. Let's just say, it was weighty.

I know, I know: It's only a hat. Big deal, right? Well, no, I will certainly be the first to admit that it isn't a big deal in the long run. I can always buy another one (there will surely be another street fair in midtown Manhattan in the near future).

But man, I really did come to love that cap, even in just one week. Sure, I liked getting complimented on it, but I myself also liked the way it looked me and the associations wearing the hat provoked in me. Me, I don't think of John Wayne or Che Guevara when thinking of berets; I think of a French artiste like Claude Monet, he of all those gorgeous impressionistic watercolors, including this self-portrait: 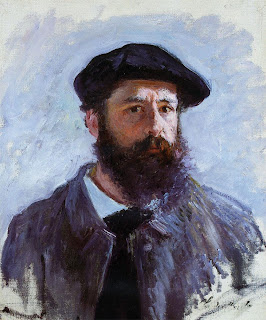 Combine that with, say, sunglasses rocked in the Jean-Luc Godard manner seen below... 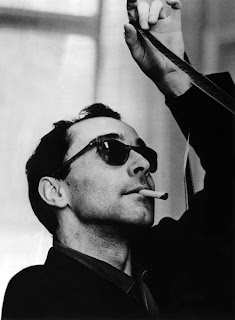 ...and, maybe with a slight adjustment in my usually styleless wardrobe, I could have perfected a pretty cool look for myself, don'tcha think?

But it's not even just about achieving a certain personal style. Hats can be just so darn cool in and of themselves to look at—especially in the movies. 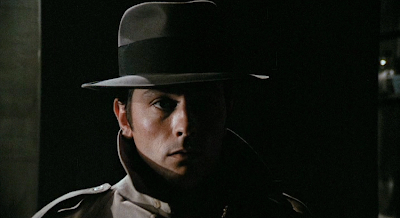 In Le Samouraï (1967), Jef Costello's hat is about as much a presence as the man himself, with Melville and cinematographer Henri Decaë finding innumerable ways to light and frame Alain Delon with his hat on to suggest the emotional guard his character—a stoic hitman who gets caught up in complicated intrigue after he accidentally gets spotted during a job—puts up throughout. To wit (and really, this represents just a fraction of the film's visual splendors in this regard): 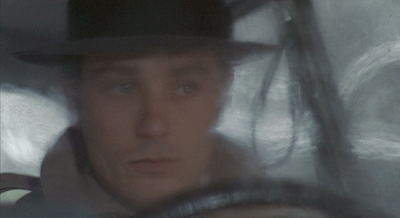 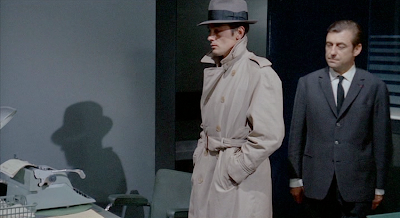 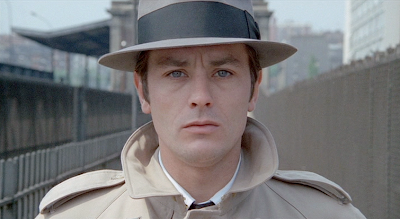 It's telling that, at the end of the film, when he finally gets caught and killed, he isn't wearing his hat. 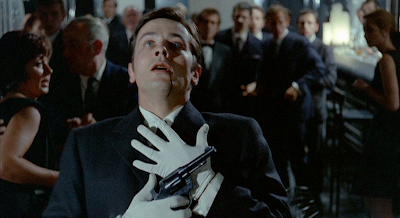 He has, figuratively speaking, finally lifted his emotional veil, and the implications are numerous and endlessly fascinating.

The Coen Brothers also understood the sense of mystery exuded by hats. 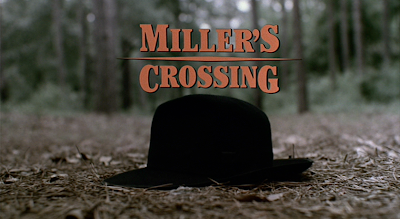 Early on in their great 1990 film Miller's Crossing, Tom Regan (Gabriel Byrne), an adviser to Prohibition-era crime boss Leo (Albert Finney), is seen making a fuss about trying to find his hat after a drunken night out. But while Tom himself never says this explicitly, it's not just about getting back what is rightfully his. Tom is another emotionally reticent creature, and his hat is as much of a symbol of that circumspection as Jef Costello's. For all of its blatant artificiality and black humor, Miller's Crossing is a deeply subtle, tragic picture centering around a man who learns that not even a single act of selfless compassion is enough to make a difference in the amoral world he lives in.

In the end—as Sheriff Ed Tom Bell would do years later in the Coens' No Country for Old Men (2007)—Tom decides to step outside of that world. Thus, the Coens leave him, and us, with his hat on. 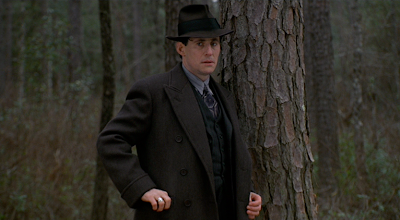 He adjusts it so that it covers his eyes... 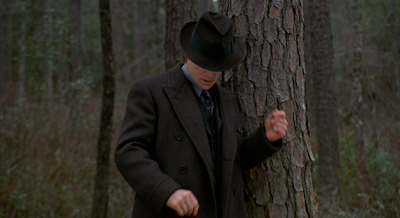 ...until a dolly-in reveals the face underneath. 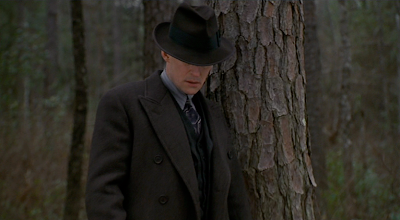 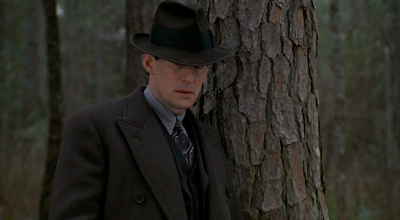 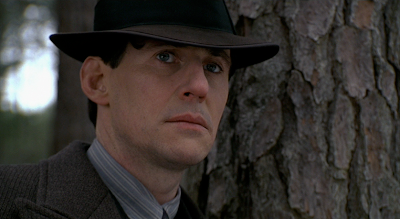 Even then, though, it's difficult to pin down what is going on behind those eyes. Regret? Sadness? A sense of relief? The Coens—to borrow a line from their most recent film, A Serious Man (2009)—accept his mystery, hat and all.

Of course, maybe a hat is really just a hat—or, in the case of movies, a prop given larger-than-life status, as inseparable from an iconic character as...say, a whip?

Even Steven Spielberg understood the iconographic power of hats, especially when it came to Indiana Jones—so much so that, in Indiana Jones and the Last Crusade (1989), he concludes his opening flashback prologue with the image of a man giving a young, humbled Indy (River Phoenix) a hat...

...which cleverly segues, via a hard cut, into an image...

...of the intrepid globe-trotting adventurer he will become later in life.

Cutting as he does from young Indy learning an early lesson about humility to his latest peril—accepted with a smile, no less—as an adult, Spielberg, with the help of editor Michael Kahn, imbues that famous fedora with an extra mythic frisson—the boy first being introduced to a hat becoming the man who has grown into that hat. Really, I don't think there's anything quite like it in the whole series to date.

Of course, there are plenty of other instances of iconic hat-donning in cinema that I can't think of/don't have time to explore at this moment. (I haven't even gotten to hats in Westerns or musicals!) But I hope you all get my drift with this brief celebration of movie hats/requiem for my lost hat. Cinema is such a magical medium that it can endow even something as seemingly commonplace as a hat with iconic power. That, and some hats are just so darn cool to look at. 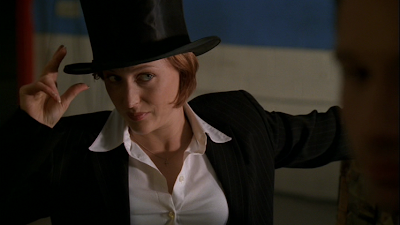 P.S. Regarding Miller's Crossing: I am definitely not the first to notice the significance of hats in that film. Film critic/blogger Jim Emerson—who considers the film to be the best of the '90s—got there first...and even has this nice video, plus text commentary, to visualize his observations. I'd be remiss if I didn't re-post that here, for easy access. Gotta give credit where credit's due:

The bowler hat in The Unbearable Lightness of Being?

Thanks owney! I have not seen that film yet, but I know the hat of which you speak, and it reminds me that I didn't even get around to thinking about women wearing hats in movies, whether it's Lena Olin, Anna Karina or many, many other gorgeous examples.