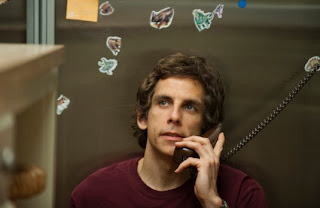 I saw Noah Baumbach's latest film Greenberg about two weeks ago with a couple who wear their political convictions on their sleeves (they both met each other while campaigning for Barack Obama in New Jersey). After the movie was over, one of them raised a concern about a particular plot turn late in the film that struck him as problematic—a concern that I thought at the time was fresh and interesting enough to do a whole blog post about. Well, it took long enough, but here is that blog post.

Obviously, spoilers are ahead.

Late in the film, Florence Marr (Greta Gerwig), the personal assistant that the film's title character (Ben Stiller) kinda/sorta falls for, divulges to Greenberg that she has discovered she is pregnant from a previous one-night stand, and that she has already made the decision to abort the baby. From what I can remember, no one in the film raises any concerns about her decision, and Marr herself doesn't seem to betray any anguish about the choice she is about to make—no vacillation, no second thoughts. For all I know, to her this is just about erasing a little mistake she made in the past.

I admit that this didn't bother me all that much in the moment (although that's partly because I inadvertently read a minor spoiler on a blog that mentioned this late development—so I was kinda primed for it). But, after the film was over, one of my moviegoing companions, while expressing overall admiration for the film—one that I, by the way, echo completely—said that the seeming nonchalance of that moment struck him as inauthentic, and perhaps bordering on offensive. His main point—if I'm conveying it accurately—was that he knew of women who had to make similar decisions, and, in his experience, none of them made the call to have an abortion as lightly as it seemed Florence had done in Greenberg; there was always some kind of genuinely tough emotional consequence as a result, something Florence never seems to experience in the film. I asked my friend if he was pro-life; he said no, not exactly, but he still felt that the issues surrounding abortion was something that should be taken seriously and discussed, not something to be treated as a mere inconvenience.

I found this an intriguing criticism; even more intriguing is the fact that, as far as I've been able to discern, very few film critics have commented much on this, especially on the heels of the debate over the recently passed health-care-reform bill, in which abortion was a major point of contention. Not that I imagine Baumbach or co-scenarist Jennifer Jason Leigh (whose character in the 1982 film Fast Times at Ridgemont High made a similar decision to abort with a similar lack of fanfare) necessarily had such immediately topical matters in mind when conceiving the film—but, amidst such a politically divisive environment such as ours, Greenberg's approach to the abortion issue, such as it is (the word is barely mentioned, if at all), could perhaps be seen as something of a radical act, at least in 2010 Hollywood...

...or, at least, that's what Stephen Farber suggests in this recently published essay at The Daily Beast, which, as far as I know, is the only piece of sustained criticism to grapple with the implications of Florence Marr's abortion decision in historical and international contexts. Greenberg, he argues, bucks a trend exemplified by recent American films like Knocked Up (2007) and Juno (2007), both of which feature heroines who decide against abortion. According to Farber, compared to more forthright overseas films on the subject like Vera Drake (2004) or 4 Months, 3 Weeks and 2 Days (2007), American films—ever since the the 1930s, really, and with the exception of a handful of films in the '70s and '80s—have preferred to either treat abortion with kid gloves (remember Knocked Up's cutesy "shmashmortion" joke?) or shove it under a rug altogether.


[Greenberg's] plot twist is pretty revolutionary for a Hollywood film in 2010. When did you last see an American movie that portrayed a woman opting to have an abortion? Thirty-seven years after the Supreme Court declared abortion legal in Roe v. Wade, the subject is more polarizing than ever, as the rancorous Congressional debate over health care demonstrated. In this contentious atmosphere, Hollywood has chosen to play it safe and keep abortion invisible.

At the end of his piece, he celebrates the film's daring, saying, "It's encouraging that in cautious times, a few filmmakers are again willing to confront this highly charged theme and take the flak that comes their way."

I'm not sure you can necessarily call Greenberg "confrontational" on the subject of abortion. No one ever actually confronts the issue in the sense of working through arguments for and against and coming to a conclusion; we hear that Florence has made that decision (she may have agonized over it beforehand, but we in the audience are not privy to that decision-making process), and Roger Greenberg accepts it without question. Nevertheless, one could say that the lack of discussion itself represents a position on the issue. My friend's criticism isn't with the position it takes so much as the lack of discussion.

So, for all of you who have seen Greenberg, I ask you: Does the attitude toward abortion suggested in the film seem unacceptably trivializing or provocatively accepting? Does it seem true-to-life or merely a screenwriter's lazy contrivance? Does it make a difference in your reaction to the film as a whole? Does a film that features a character deciding for or against an abortion need to make a big point of it for it to be acceptable?

Your thoughts on this are welcome, as always. (In other words: comment, please!)

P.S. I realize I haven't said much about the rest of the film. Short version: I like it. I like Ben Stiller in this, and I do find Greta Gerwig to be a tantalizing presence and fascinatingly original actress. I like how Noah Baumbach basically presents a fairly extreme specimen of misanthropy and maladjustment and tempers his character's potentially insufferable nature with enough traces of compassion to make him seem, well, almost universal in some of his neuroses. (Or, at the very least, I recognized some of his neuroses as extreme versions of my own.) It can no doubt be a discomfiting experience, but the end result is miraculously airy (part of that thanks to Harris Savides's limpid lensing) and, finally, even moving. God help me if I'm in my 40s and still dwelling on past failures like Roger Greenberg does. Hell, I sometimes feel I do too much of that now.

P.P.S. The title of this post, by the way, is a sideways reference to this now-infamous piece, titled "My Greenberg Problem—And Yours," by New York Press film critic Armond White, which is barely a review of Greenberg as it is a nuclear bomb lobbed at what he sees as an unethical collusion of forces—one that, he submits, has existed for years in the film-critic establishment—conspiring to get him banned from being able to RSVP to an early press screening of the film. White is notoriously critical of Baumbach's films—he even called him an "asshole" in this online interview—and so apparently the film's publicist decided to bar him from seeing it early. (Originally it was reported that Baumbach and producer Scott Rudin had asked the publicist to ban him.) All of this was big news among said film-critic establishment for a couple of weeks before the film was officially released, but the party pretty much ended with White's official, frankly bordering-on-deranged response to the whole controversy.

Perhaps appropriately enough, one of the points that came up in this mess is a quote concluding a brief New York Press review of Baumbach's second feature, Mr. Jealousy (1997), that reads:


I won’t comment on Baumbach’s deliberate, onscreen references to his former film-reviewer mother [Village Voice critic Georgia Brown] except to note how her colleagues now shamelessly bestow reviews as belated nursery presents. To others, Mr. Jealousy might suggest retroactive abortion.

There's that a-word again! Many people took this as him wishing Baumbach actually had been aborted; naturally, White denied the implication (though he doesn't really try to disprove it so much as simply assume that anyone who actually believed that implication was a self-serving idiot)...but in his New York Press screed, he goes further:


Even if I had advised abortion (which I did not), fact is, abortion remains a hallmark of the privileged class that extols Baumbach. In fact, the casual acceptance of abortion is part of Greenberg's plot. It's practically an article of faith for these "liberals."

Baumbach's films all deal with people who are privileged in some way. Could Florence Marr's "casual acceptance of abortion" be a sign of class status as well? (Not that I'm taking anything in White's piece all that seriously...but hey, I'm all about asking questions, and so I find that question as valid as any.)
Posted by Kenji Fujishima at 4/16/2010 12:01:00 AM

I also wondered about the apparent lack of discussion regarding the abortion plotline. (It does make sense that opening-day reviews would avoid this topic to avoid spoilers, but I haven't seen much about it on the blogo/twittersphere either.)

Like your friend, I was a bit taken aback by the nonchalance of it--at first. But I think it sort of makes sense when you consider the question of POV. With the exception of the first 10-ish minutes, the film's story is told from Greenberg's perspective. And being the kind of insensitive, narcissistic guy he is, Greenberg wouldn't necessarily be attuned to Florence's inner conflict on the matter. Not to get all RASHOMON, but if the entire film were retold from Florence's POV a la those first 10 minutes, we'd have a very different movie--and the abortion stuff in particular, I think, would by necessity play out much differently.

Related question: why *did* Baumbach begin the film from Florence's POV? Rather than showing us what Greenberg's life is like before Florence enters it, Baumbach shows us what Florence's life is like before Greenberg enters it. It's an unusual dramatic strategy that I don't think many filmmakers/screenwriters would adopt, especially when you consider the title of the movie.

Yeah, that focus on Florence in the opening scenes is an interesting strategy. I guess it's Baumbach's way of giving us a sense of her character before introducing us to the character she'll kinda/sorta fall for. Because, while perhaps a certain desperation binds them together, they are rather different in many ways. Maybe he wanted to offer a tantalizing compare-and-contrast at the beginning...?

Either that, or he just really, really likes Greta Gerwig. (Hey, I can relate, after seeing her in this film!)

And yeah, I do think your explanation of the film's supposed nonchalance about Florence's abortion makes sense.

Great post Kenji, you definitely made me want to see the movie!

Yes, definitely worth seeing (though be prepared to feel the urge to throw something at the screen in Ben Stiller's direction, lol).