Overt and Covert Emotions

EAST BRUNSWICK, N.J.—Once again, I see that I've fallen somewhat behind in reviewing some of the films I've seen in theaters recently. Allow me to play some catch-up, then! 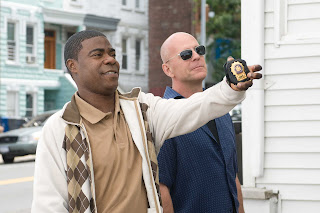 The only truly memorable joke in this film comes right at the beginning, as Tracy Morgan, as he is spewing forth a battery of cop-movie homages amidst an interrogation, yells out "Yippee-kayyay, motherfucker!" and Bruce Willis, standing behind the interrogation room's one-way mirror, smirkily intones, "I've never seen that movie before." Get it? Because Bruce Willis played John McClane in all those Die Hard flicks, and he says that exact catchphrase in all of 'em? Get it?

But seriously, folks, everything you need to know about about this overextended, deliberately aimless and mostly lame riff on 1980s action cop dramas—complete with retro Harold Faltermayer synthesizer score, natch—is contained in that one joke, saving you the trouble of actually having to sit through the whole thing. It goes nowhere fast—probably by design (the film is called Cop Out, after all), but just because I can justify it doesn't mean I have to enjoy it. That said: yes, Kevin Smith, I did pay money to sit through this, if that makes you feel better. 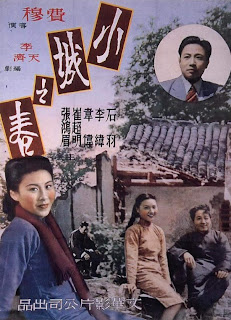 During the recent Jia Zhang-ke retrospective at MoMA, Spring in a Small Town was paired with Jia's 2008 short Cry Me a River, the reason being that Jia has cited the 1948 Chinese classic as his inspiration for that lovely piece. Naturally, pairing them together invited one to consider their similarities—though ultimately, the only significant quality they share is a mood of contemplative regret over relationships not pursued and emotions kept in check. The Jia short condenses that mood into 20 spare, concentrated minutes (and, as a personal bonus, it features, as an exterior location, a canal in Suzhou on which I myself rode when I went to China two years ago), while Fei Mu's film elaborates on it in 93. Neither is any less affecting than the other; what perhaps deepens the experience of Spring in a Small Town is Fei's empathy for his characters. None of the parties involved in the central love triangle are bad people, by any means; it's just that, in spite of the powerful romantic emotions raging inside all of them—especially the female character played exquisitely by Wei Wei—they all feel bound by traditional notions of marriage and friendship to keep their passions under wraps.

The film's compelling seesaw of emotions is captured in a relatively claustrophobic setting—all of the actions take place within one bombed-out-looking village where it seems these people, a grandfather and the woman's husband's sister are its only inhabitants—with a sense of desolate atmosphere and an eye for expressive visual poetry by cinematographer Li Shengwei. But above all, it's the emotional complexity of Spring in a Small Town that may well be its most beautiful quality of all. It's a romantic melodrama with characters as believably rich and multifaceted as you or I. 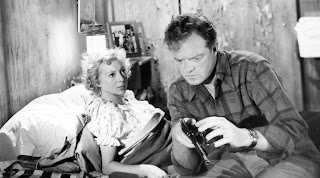 Webb Garwood, the anti-hero of Joseph Losey's 1951 noir The Prowler, is obviously not what you would immediately consider a "sympathetic" main character—but, as Van Heflin plays him, with uncompromising honesty and menace, one can get an idea of what drives his ruthless behavior through the course of the film. A former basketball star in college, he is now an ordinary cop frustrated with the lack of direction in his life, as he admits to Susan Gilvray (Evelyn Keyes), who herself feels stuck in a passionless marriage. Thinking he has found a kindred spirit in Susan, who is married to a disc jockey who says goodnight to her over the airwaves at the end of every episode, Webb begins to fixate on her—and, interestingly, Susan, for a time, reciprocates, though with palpable conflictedness (most likely contributed by those same traditional notions of faithfulness in marriage that highlights Spring in a Small Town). Their relationship takes a slew of twists and turns, from murder to marriage, all concluding with a secret birth conducted in a windy desert in a finale that is as spiritually expressive as the snow-covered second half of Nicholas Ray's On Dangerous Ground (1952).

The Prowler obviously goes far darker and deeper with its characters and their suppressed, forbidden desires than the far more tender-feeling Spring in a Small Town does, but the film similarly operates as a fascinating psychological study of anguished characters locked in an emotional tug-of-war, observed by Losey and cinematographer Arthur C. Miller with a surfeit of beautifully wrought long takes. Webb Garwood ultimately gets his in the end (admittedly maybe more of a Hays Code-acceptable type of ending than anything else), but he remains a memorably convincing movie rake, one who disturbs precisely because his desires are, in many ways, universal: a desire to break out of a dead-end life, to move up in class, and the like. You almost want to see him get away with it all, in spite of your better judgment. Ah, film noir: making us contemplate the moral abysses underneath us all!

(Spring in a Small Town only available in an out-of-print Cinema Epoch DVD that apparently contains a print of poor quality. Cry Me a River is available as an extra on Cinema Guild's DVD of Jia's most recent feature, 24 City. And The Prowler is unavailable on Region 1 DVD at the moment.) 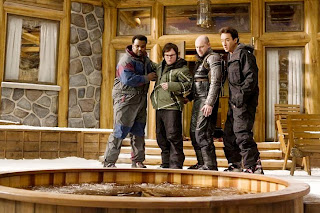 Yes, Hot Tub Time Machine more or less reconfigures elements from last year's big comedy hit The Hangover—right down to its scene-stealing third wheel (Zach Galifianakis in The Hangover, Rob Corddry here)—into an '80s nostalgia trip. But I enjoyed this more than The Hangover, a movie that never quite delivered on the delirious craziness its situations promised (and which wasted Mike Tyson to boot). Hot Tub Time Machine, a messier, less carefully structured movie, does eventually work up a steam of comic insanity that explodes at the end in ways that are often more inspired than anything in The Hangover. And, as A.O. Scott eloquently elucidated in his New York Times review of the film, there is a welcome undercurrent of bitter regret, played with conviction by the central quartet of actors, that actually creates some genuine emotional stakes for these seemingly washed-up characters. Hot Tub Time Machine eventually becomes almost poignant in its riotous consideration of middle-age disappointment. That's certainly more than Todd Phillips & co. even attempted for The Hangover. 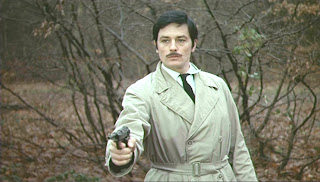 More adventures in repertory cinema, this time with a Jean-Pierre Melville film I had never seen until three weeks ago at IFC Center. The legendary French New Wave director's spare, beautifully controlled late style—so concentrated, graceful and trance-like—is familiar, but this time his subject isn't one criminal's elusive inner life, as in his 1967 masterpiece Le Samouraï. Le Cercle Rouge's canvas is broader: a consideration of the criminal lifestyle as a whole.

It's telling that the final shot of Le Cercle Rouge is not of any of the criminals (Alain Delon and Gian Maria Volonte playing the two main thieves) involved in the film's justifiably celebrated central jewel heist, but of Mattei (André Bourvil), the police commissioner who is tasked to find and capture these criminals after one of them escapes from his grasp in the film's opening minutes. For me, the character of Mattei—not a major character, but a pivotal marginal one who is palpably unsettled as he is by his superior's authoritatively intoned philosophy that "all men are guilty" and that "They're born innocent, but it doesn't last"—holds the key to the picture's moral depths What drives these criminals to maintain that dangerous lifestyle, even after they have been punished by law for it? Is that possibly the only life they know? Or does something else—most vividly, the possibility of redemption, in the case of tortured former sharpshooter Jansen (Yves Montand)—keep them in the game? Melville, expressing his characters' guarded reticence through his breathtakingly cool style, keeps their motives intriguingly mysterious—but the police chief's misanthropy, and Mattei's troubled reactions to his investigation and whether they validate that point-of-view, casts a mournful pall over the whole film. Even at the end, as the criminals are gunned down by the police, the last shot is a close-up of Mattei's face walking around the crime scene, looking visibly shaken at the wasted lives that have just been taken.

If Le Samouraï was an intimately scaled meditation on a man defined almost exclusively by his actions, Le Cercle Rouge is an epic dirge about men defined almost exclusively by their actions. Amidst the cool gangster poses—and Melville's precise ways of lighting and framing those poses—and his play with noir genre tropes lies a whole troubling moral philosophy. That, of course, is one of the major source of the endless fascination of this master's late gangster pictures.