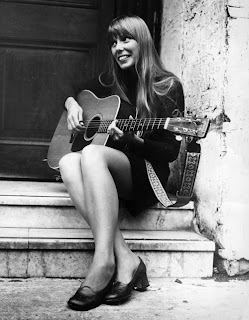 Among the suggestions I received for music to get me in a California frame of mind for my trip in to the West Coast in a couple of weeks—a question I posed a couple weeks ago here—were a couple of Joni Mitchell albums from her peak creative period in the early 1970s, Blue (1971) and Court and Spark (1974). Both were recorded in Los Angeles, and both—as well as Ladies of the Canyon (1970) and For the Roses (1972)—show this famous singer-songwriter pushing past the acoustic folk of her first two LPs, Song to a Seagull (1968) and Clouds (1969), and trying to experiment with a more pop-oriented rock sound.

I finally listened to them all last week...and (sing it with me now) help me, I think I'm falling in love with her.

And for once, it isn't just about the music or Mitchell's soaring—and hell, I'll say it, sexy—voice; the words intrigue as well. I'm not sure I've ever heard such emotionally direct lyrics in an album. Bob Dylan, another celebrated singer-songwriter of that generation, might continue to exert an endless fascination with his enigmatic words: Where does the personal aspects end and the calculated aura of mystery begin? Or is that sense of mystery he cultivates the most deeply personal thing about him? (Possibly not, as his great 1975 Blood on the Tracks suggest.) But there's apparently no hiding with Joni Mitchell.

Take "California," the sixth track off Blue, in which she expresses a longing to go back home to Los Angeles while traveling abroad. Right from the first stanza, she, armed with acoustic guitar, lays out the dominant feeling she's trying to capture with the song:


Sitting in a park in Paris, France
Reading the news and it sure looks bad
They won't give peace a chance
That was just a dream some of us had
Still a lot of lands to see
But I wouldn't want to stay here
It's too old and cold and settled in its ways here
Oh, but California
California I'm coming home
I'm going to see the folks I dig
I'll even kiss a sunset pig
California I'm coming home

Mitchell's singing of these lines has an improvisatory, ad-libbed quality that intensifies the intimacy.

It's the chorus that I find most immediately affecting, however:

Having walked many times alone on streets filled with strangers, I know exactly what she's talking about. It's that sense of universality to her words that bridge the gap between personal obsession and a wider, broader resonance.

Here she is performing that song live in October 1970:

A lot of Mitchell's songs on these early-'70s albums are basically love songs of varying sorts: songs about romantic desire, songs about guarded hesitation, songs about disillusionment, even a memorably hell-raising tune on Court and Spark, "Raised on Robbery." Love is arguably the great pop-music standby; as long as there has been music, love in all its forms has been its most consistent subject. But Mitchell brings a personal specificity and maturity to her lyrics that is always refreshing—and her glorious soprano adds layers of vulnerability and introspection to her plain-Jane vocal exterior.

To put it less eloquently: She may be singing about things only she herself truly cares about, but somehow that makes her, and her music, more attractive, not less. Listening to her songs, you feel like you'd like to get to know her personally. At least, I do. 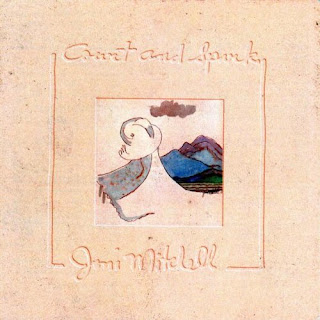 Blue is great, of course. But if I prefer Court and Spark above all of her albums up to that point, it's mostly by virtue of its more adventurous sound and style; in it, she embraces small-scale orchestral arrangements in addition to her usual piano and acoustic guitar, and the effect feels larger in scale than its lyrical content might indicate, though never to the point of sounding overblown. Also, it features the only song of hers—other than the oft-covered "Big Yellow Taxi," from Ladies of the Canyon—that I knew well before my recent listening binge: "Help Me," which was the only Joni Mitchell song Central Jersey's soft-rock radio station 98.3 FM WMGQ—a station to which I listened frequently as a young kid, in an attempt to try to balance out all the classical music I listened to in my early years—ever played in their rotation. It sounds even better in the context of an album that exposes Mitchell as an even stronger and more complex figure than might have been apparent in her previous albums.

I haven't yet delved into her even more experimental later work, but I'm looking forward to eventually doing so. Joni Mitchell: Color me smitten. 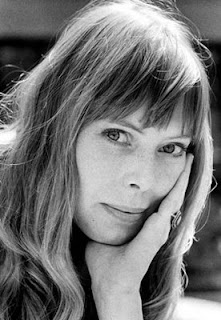 Here she is performing "Help Me" live:

i envy what you have to discover: first hearings of "The Hissing of Summer Lawns", "Mingus", and the supreme masterpiece: "Hejira". and don't neglect the very under-rated "Don Juan's Reckless Daughter". "Court and Spark" blew me away, back in the day.

Actually I haven't gotten around to listening to much of her post-Court and Spark albums—with the exception of The Hissing of Summer Lawns, which I like a lot as well. I think you're the first person I've read to call Hejira her "supreme masterpiece," so I'll have to try to give that a whirl as well.