EAST BRUNSWICK, N.J.—I have just returned from a day in New York—much of it spent taking in a scintillating double bill at both New York's IFC Center and Film Forum, but some of it spent walking around in the glorious sunshine. And thankfully, today I had my Canon PowerShot SD400 with me to take a couple of snaps of the day's beautiful weather.

If you needed any more proof that spring is indeed finally here...well, here you go (both of these taken while walking up 6th Avenue in Greenwich Village): 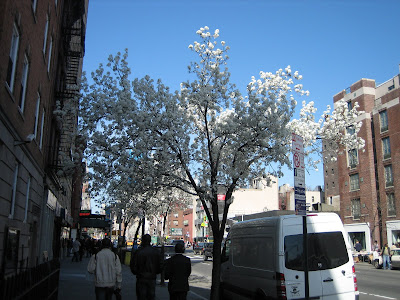 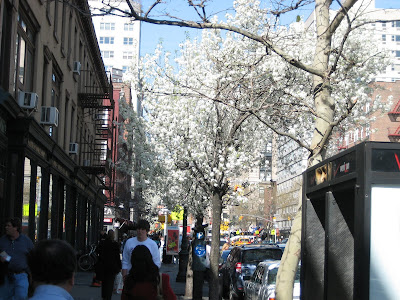 I could have basked in this weather all day long. But alas, I have boring practical things I had to take care of at home—like, say, filing those pesky 2009 tax returns... 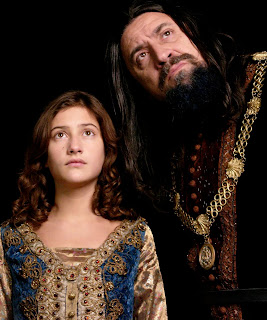 That scintillating double bill, by the way, included Catherine Breillat's latest film Bluebeard and Abbas Kiarostami's 1990 film Close-Up, the latter in a new 35mm restored print. Both films, by the way, are excellent. Breillat's film takes the famous story of the wealthy aristocrat with a blue beard and a murderous past and dissects—with her usual cool precision, intelligent provocation and atmospheric sense of danger—the emotional and sexual complexities underlying not only this fairytale, but perhaps of all the fairytales we hear as children but whose real-world implications we can never fully grasp until we are older and more mature. (Its final image is particularly stunning: gruesome and chock full of devastating implications.) 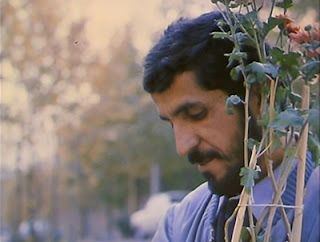 It's the Kiarostami I'm especially dazzled by, however (for one thing, it's a far warmer picture than the Breillat, though that's hardly meant as a criticism of Bluebeard). Believe it or not, this is the first film by the famous Iranian auteur I've seen, and I'm still reeling from its incredibly dense interplay between fiction and reality, its humanism and its sheer love of cinema. Inspired by an actual incident of a poor man entering into the lives of a well-to-do family by pretending to be Iranian filmmaker Mohsen Makhmalbaf, Kiarostami—who appears as himself in this film—uses documentary techniques to explore the circumstances behind this ruse, using many of the real people involved and even filming the man's trial. What he uncovers is utterly fascinating and, in the end, deeply moving; turns out, the man was fueled by a passion for Makhmalbaf's films, which he says spoke to him in deeply personal ways few other artists have been able to articulate for him. Who knew that, 18 years before Juliette Binoche confided to Fang Song in Hou Hsiao-hsien's Flight of the Red Balloon that her film "touche[d] on very deep things I thought I'd forgotten," that Abbas Kiarostami had already made a feature-length ode to the power of cinema to touch on recognizable human memories and emotions? And yes, by its beautiful conclusion, Close-Up turns out be nearly as wondrous and inspirational as that Hou film. (This is the last day of its run at New York's Film Forum, but the Criterion Collection is scheduled to release a two-DVD set of the film on June 22. It's very much worth the investment!)


***
But wait a minute, some of you might be wondering: Aren't you supposed to be working today? In fact, thanks to the Asia and Europe editions of The Wall Street Journal not publishing on Friday and Monday, I have Thursday and Sunday off. Four-day weekend, woo-hoo!
Thus, I am planning on doing a lot of cinephile catch-up this weekend, taking in a wide variety of films ranging from the new 35mm print of F.W. Murnau's Sunrise (1927) at Film Forum, to as-yet-unseen new releases like Bong Joon-ho's Mother and Marco Bellocchio's Vincere. We'll see what else I can fit in, while trying to do something outdoorsy in between it all. (Weather.com forecasts sunshine and 70°-range temperatures—a real "beaut," as former New York mayor Fiorello LaGuardia might have said).
Spring is in the air, and its really getting me high right now. Also, I don't know the last time I've actually felt this excited about a four-day weekend. Maybe all the way back in high school...?