It's been a little over a month since I moved into my new apartment here in Crown Heights, and thankfully, I have survived that first month with my well-being fully intact.

I say "thankfully" because, for a day or so after I officially moved all my stuff into the apartment, I suddenly found myself seriously questioning my decision to live in this particular neighborhood. That brief bout of self-doubt came as the result of a message I received from a friend of mine on Facebook after I officially changed my location on my profile to "Crown Heights, NY"; in that message, she not only informed me that she had just recently moved out of the area after two years, but also proceeded to recount horror stories about things that she witnessed or heard about: people being robbed and mugged; young kids shooting guns in the air, etc.

For a couple of days, this Facebook message positively haunted me. I was fully aware of the racially charged riots that took place between the black and Jewish communities in Crown Heights in 1991 before I looked at the apartment in which I now reside, so I certainly had my misgivings from the outset. But then, on a sunny Friday evening in August, I and one of two potential apartment-mates met with the resident who had put up the listing in the first place (she was still going to be living there, but she needed to fill the three other rooms in the four-bedroom apartment, since the rest of them were moving on); sat in the park right across the street; talked to one or two of the residents in the building next door; and in general found myself liking what I saw and heard. I mean, it's across from a park, I reasoned to myself. There are lots of families here. Surely it can't be that bad. And then, when that one potential suite-mate dropped out of the apartment hunt and the other took a look at the apartment on his own, he came to the same positive conclusions. If two people like this same potential living space so much, I reasoned, then there must be something special about it... (Did I mention the $700-a-month rent?)

But then, with this friend's Facebook warning, I began to second-guess myself: Was I naive in making such assumptions? Did I fail to do enough research before agreeing to this? For about a day afterward, I obsessively searched for information about living in Crown Heights on Google, and I was not encouraged by much of what I read. Based on various online forums and articles I encountered, Crown Heights seemed to be placing fairly low in "safe-to-walk-at-night" rankings (right alongside its neighbor to the north, Bedford-Stuyvesant, in that regard), and some of these respondents openly expressed disbelief that people would even think about living in the area. What had I gotten myself into? was the question that kept ringing my head that day, and the feeling in my heart was heavy.

As you can see, though...it's been a little over a month, and I'm still alive and kicking. I keep to myself while walking home from the subway, I don't carelessly flash money and valuables around, and I certainly don't try to invite trouble by associating with shady-looking people I might see on the street. That is not to say that trouble might not present itself to me in the next 11 months living in this area...but I mean, what can I do now, right? The only thing I can do is be careful, or at least as careful as I usually am when walking on any city street at night.

Besides...it's all a part of living on one's own, isn't it? Handling such troubles, or potential troubles, by yourself? So far, I really am enjoying this whole living-on-my-own thing: making my own decisions on finances, doing my own grocery shopping and laundry, and the like. It's been years since I've felt this kind of liberating independence. Even at Rutgers for my undergraduate-college years, I still felt like I was on training wheels, so to speak; my parents were paying most of my tuition, and I was so close to home that I often found myself just going home most weekends. Well, for the most part, the training wheels are off here in Brooklyn, and I'm flying solo: no parents paying rent for me, no close proximity to home (though admittedly, home still isn't that far away). For once, I find myself perilously close to feeling like a real adult!

And I don't think I'm doing too badly for myself so far. Sure, I probably spent far more money last month than I should have...but I figured I'd be spending a lot in my first month getting whatever supplies I needed to help settle myself in, and that, starting next month, I'd make a stronger effort to budget myself as much as possible. Because of my desire to save as much as I can, I've been less intense about keeping up my usually rabid moviewatching habits on weekends; I have errands I need to take care of every weekend, so if such sacrifices have to be made, I will make them.

That said, I'd like to think I haven't completely cut myself off of high—and low—culture here in New York because of my newfound frugality. My first Friday night as a New York resident, for instance, found me at, in this order: a housewarming party thrown by the residents on the first floor of my apartment building; a horror-movie-themed bar in Park Slope witnessing two pole dancers gyrating while I knocked down a mug of beer with a fellow film critic; and then, also in Park Slope, the birthday party of a friend of one of my roommates', at which I knocked down more alcohol and got fairly buzzed from the experience. 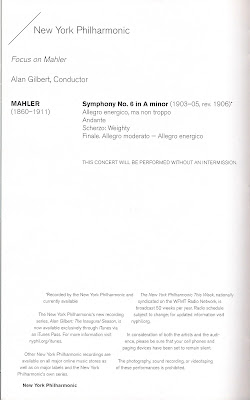 On the higher end of the cultural scale, however, I did visit Brooklyn's Light Industry for the first time ever to see a couple of little-seen Maysles Brothers documentary shorts (one about IBM, the other about Truman Capote and In Cold Blood); and a couple days later—pretty much on a whim, actually—I finally witnessed a very fine live performance of Gustav Mahler's majestic Sixth Symphony, with Alan Gilbert directing the New York Philharmonic, at Lincoln Center. (Thanks to a membership to the Gustav Mahler Society of New York that I had completely forgotten I had, I was able to save quite a bit on rear-orchestra seats.)

Oh, and now that I don't have to worry about getting picked up by family members every night to get home, I can stay out late even on weekdays if I wanted to do so! And I've taken advantage of that. Just last night, I decided to go check out Michael Mann's 1981 debut feature Thief at Film Forum—playing as part of the theater's "Heist" series—at an 8:30 p.m. screening after work; I probably wouldn't have even bothered to try to see such a late show if I was still living at home in central New Jersey. (It was totally worth the time, too. Judging by the film, Mann had mostly solidified his vision in his creative game; the seeds for his 2006 Miami Vice, with its swooning romantic fatalism, were planted way in advance.)

The fact that I now live close enough to be able to take advantage of all the New York City has to offer culturally is enough for me to conclude that I made the right choice in moving...whatever dangers my neighborhood may pose.

To my surprise, my mother—who had been skeptical of my decision to move from the outset—has not been calling me constantly to see how I'm doing. In fact, she's done the opposite: She has embraced email and (to a lesser extent) text messages, and is keeping in touch with me electronically, sending me about one email a week to keep in touch.

In one of her more recent emails, she dropped these lines:

I miss you. I have learned to let you kids go for you to grow [emphasis mine]. I hope you eat your 3 meals properly. It is important to respect your body. I know you are learning to do so. Hope everything is going smoothly with you. God bless you.

I have to admit, I felt a sense of vindication at reading that, at least for the moment. That is exactly what I've been trying to get her to understand.

Congrats!! I wouldn't worry so much about the hood. People always like to worry about certain areas in New York, but, really, if a robber wants to mug you in the center of Times Square, what's going to stop him? Just use a little common sense, and you should be good.

Hi, I'm Sam's grandfather. I share all your concerns (and your mother's) when I think about Sam's own "Odyssey-to-the-hood" I admire you both, however, for your spirits of adventure and optimism. Good luck to you both! Keep we worriers posted...
John Snow