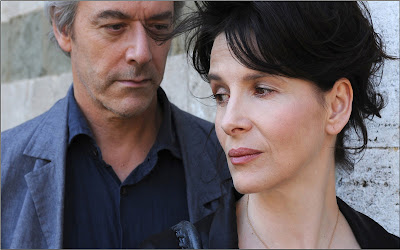 And with this wrap-up with my two estimable House Next Door partners-in-crime Aaron Cutler and Elise Nakhnikian, my New York Film Festival 2010 experience comes to an end. I think my contributions to the piece constitute a serviceable summary of what I observed and marveled at during the festival, so I'll let that speak for itself.

I may try to add brief thoughts on other films at the festival that I didn't cover for The House here on this blog; we'll see if that comes to pass. For now, the only thing I'll say is: Naturally, I'm already chomping at the bit to do something like this all over again—possibly even earlier than next year's New York Film Festival. (Maybe next year I'll try to subject myself to the super-intense Toronto International Film Festival experience, as I was originally intending to do this year?) For at least two full weeks of the recently completed four-week festival-screening cycle, it felt liberating being among fellow cinephiles, sharing our enthusiasm for the latest and brightest in this great art form; the sense of camaraderie over the course of those weeks was quite intoxicating. Seeing great (or even not-so-great) films and interacting on a daily basis with fine people: I certainly wouldn't mind, you know, doing something like this on a regular basis!