BROOKLYN, N.Y.—My apologies, readers; I've gotten so bogged down with New York Film Festival stuff (in addition to a few socializing detours) that I haven't been able to find time to update My Life, at 24 Frames Per Second...until now.

So, as my way of catching up, here are a few links to recent New York Film Festival dispatches published at The House Next Door:

Not included among these links are reviews of my two favorite films of the festival so far, Abbas Kiarostami's Certified Copy and Apichatpong Weerasethakul's Uncle Boonmee Who Can Recall His Past Lives. I caught up with both after I was forced to miss their respective press screenings Tuesday of last week; Kiarostami's film I caught at a smaller press screening on Monday night, Apichatpong's at its public screening on Saturday.

That was a fun experience, by the way, watching Uncle Boonmee at that public screening. First of all, I was able to score $10 rush tickets, half the price of a regular-admission ticket; even better, I got a seat all the way in the first row of the Alice Tully Hall auditorium! (Some people don't like sitting all the way in the front, but generally I don't mind; in this case, it allowed me to be better able to completely immerse myself in Apichatpong's wondrously surreal imagery and bask in its amazingly evocative sound design. I felt like I was staring up at an IMAX movie in complete awe.) And secondly: Apichatpong was there to discuss the film with film critic Melissa Anderson. I was so enthralled by the experience that, after the Q&A was over, I went up to him on the stage and asked for an autograph. 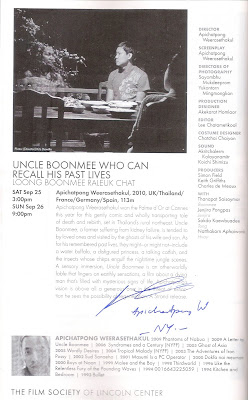 Maybe someday this will become very valuable? (I would have taken a photograph of him, but I didn't have my camera on me, and the camera on my cellphone doesn't seem to have the ability to turn off the flash.)

Anyway, I hope to write about both Uncle Boonmee and especially Certified Copy—an intellectually dense yet deeply moving achievement—in the near future. (Those two, Manoel de Oliveira's The Strange Case of Angelica and Olivier Assayas's Carlos would probably constitute the highlights of my festival experience so far.) In the meantime: Tonight I will finally be introducing myself to the work of avant-garde filmmaker James Benning through his latest work, Ruhr, playing in a program of its own at the festival's Views from the Avant-Garde series going on throughout this weekend. It's about time I delved more deeply into experimental cinema, methinks!
Posted by Kenji Fujishima at 10/01/2010 09:00:00 AM

I sat in the very back of the theater at the Joe film. Maybe it would have helped if I was closer.

Awesome that you got his autograph. That definitely will be valuable.

I haven't gotten around to Kiarostami's film, although it looks astounding.