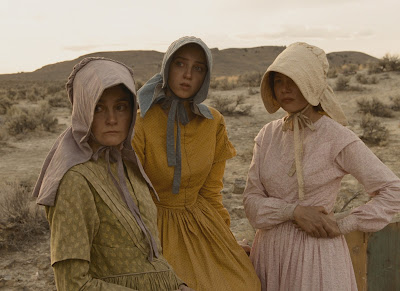 My latest New York Film Festival dispatch for The House Next Door is a review of Kelly Reichardt's latest film, Meek's Cutoff—and it is by far the longest thing I've written so far about any film I've seen at the festival. I wish all of that length was put in the service of saying how awesome I think the film is...but, alas, I can't quite join in the chorus of praise with which the film has been showered, especially ever since it was voted as the best film of this year's Toronto International Film Festival in an indieWire poll last month. I hope the review gives you all a good indication of where I'm coming from in my skepticism—and, of course, I welcome responses anyone might have to the points I raise.

By the way: In case any of you didn't know, I am in the home stretch of New York Film Festival coverage. The press-screening cycle comes to a close tomorrow (the festival proper ends Sunday night with Clint Eastwood's Hereafter), and I have three or four dispatches left to file for The House. And that is that; concluding remarks about the experience as a whole to come after the festival is officially over. Short version, for now: If only I could do this kind of thing on a regular basis!
Posted by Kenji Fujishima at 10/07/2010 06:00:00 PM