On the Verge of Cracking Open: David Lynch's Wild at Heart (1990) 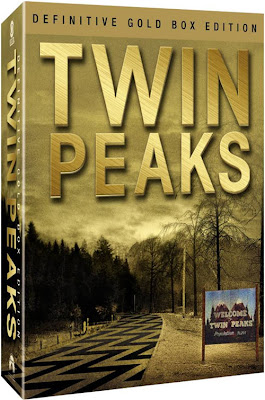 Last year, I impulsively blind-bought a copy of the complete Twin Peaks "Definitive Gold Box Edition" DVD set, mostly because it was on sale for about half its MSRP. Until my Yellowstone/Grand Teton vacation at the end of August this year, though, I had only watched the first four episodes, including the 90-minute pilot, over the span of, oh, maybe a year? So, considering that I was going to be stuck with the rest of my family in a vehicle for days to go back and forth, I decided to see as much of the rest of the series as possible in the oceans of free time I had.

I'm still not quite done with the series yet (as of last night, when internet-connectivity troubles led me to watch its 27th episode, I'm three episodes and a feature film away from being finished with Twin Peaks in general). My point in bringing up Twin Peaks, though, is that the series—or, at least, one characteristic of the series, one that could be considered a characteristic of David Lynch's style in general—kept popping up in my head as I saw, for the first time ever, his still-divisive 1990 film Wild at Heart at a special 20th-anniversary screening at IFC Center last Monday evening (Barry Gifford, the author of the book on which Lynch based his film, was in attendance). 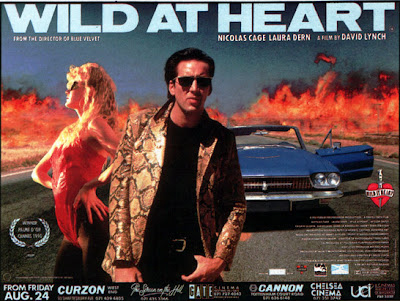 Wild at Heart was released in between the first and second seasons of Twin Peaks, so for many audience members, this was their first exposure to Lynch's sensibility freed from network-television taste standards. An acquaintance on Twitter recounted to me his experience seeing the film on opening night: According to him, many audience members walked out right after its opening scene, in which Sailor (Nicolas Cage) beats Bob Ray Lemon (Gregg Dandridge) to death in gruesomely extended fashion.

There were no walk-outs at the screening I attended, but there were snatches of laughter as Lynch forced us to witness Sailor beating his victim past any point of rational moral boundaries. At first shocking, the sequence becomes horrific and then somehow becomes oddly comic, especially once Sailor collects himself, assumes his Elvis Presley-like pose again and points menacingly at Lula's mother Marietta (Diane Ladd), who may or may not have ordered the hit in the first place.

Are we meant to take his outburst of violence seriously, or does Lynch—as Roger Ebert, for one, claimed in his dismissal of the film—deliberately defuse its horror for the sake of "parody"? I would submit that perhaps this lack of a sure emotional response is precisely the point; in Lynch's singular cinematic universe, comedy and horror often intermingle in ways that can confuse the hell out of all of us.

Twin Peaks certainly demonstrated this, time and again, in many ways. For now, I'll zero in on one moment I remember most vividly off the top of my head.

The series's 16th episode—the one that follows the horrifying revelation that Laura Palmer's father, Leland, under the influence of a mysterious force named Bob, was behind his daughter's murder—features a scene that encapsulates this emotionally complicated approach. (I realize that the episode wasn't technically written or directed by Lynch; this particular episode was written by Scott Frost and directed by Caleb Deschanel. But Lynch's intuitive, emotionally generous, exuberantly surreal sensibility is never too far behind even when other hands are conceiving and directing individual episodes.) 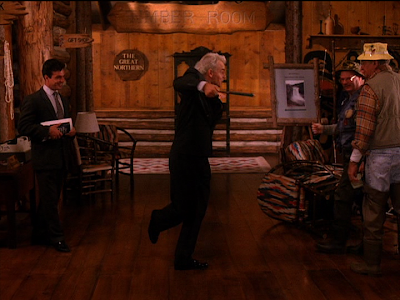 Throughout the second season up until this point, we have seen Leland (Ray Wise) every once in a while randomly break out into bizarre song-and/or-dance numbers, in a seemingly overcompensating attempt to convince everyone that he is actually adjusting to life without his precious daughter better than he actually is. But now that we have gotten an idea of the real source of Leland's strange outbursts, his latest, and scariest, iteration of this strange tendency is infused with an extra sense of menace.

But there is also a dark sense of humor to the scene, emphasized by composer Angelo Badalamenti's layering of reverberation-heavy big-band music atop familiarly foreboding low-register synthesizer chords—a moment of musical scoring that is almost Charles Ives-ian in its impact. It's as if the music, all by itself, invites us to ask: Do we laugh at the absurdity of Leland's actions, or do we gasp in horror at the depths of depravity that said absurdity conceals? Twin Peaks always generated a lot of its frisson from similarly bold juxtapositions of humor and disturbing drama, but rarely quite so explicitly, to the point where the laughter positively dies in your throat. 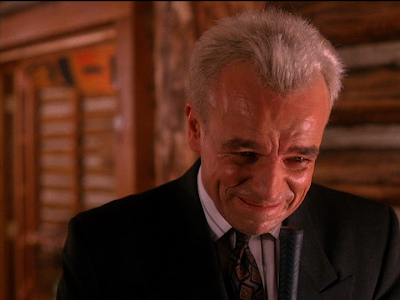 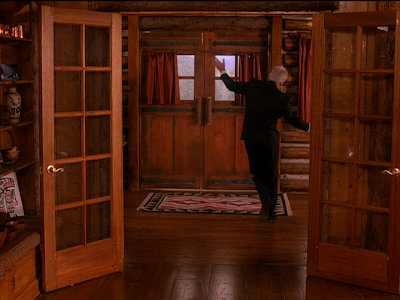 Wild at Heart swims more freely in such a brazen mixing of styles and tones. When, for instance, we see a dog walking out of a just-stuck-up bank with a human hand in its mouth (an image that recalls a similar moment in Akira Kurosawa's Yojimbo), are we meant to laugh at such perversity, or be appalled? One suspects that Lynch aims to evoke both pitch-black comedy and cold-hearted awe at nature's seeming indifference to man's troubles in the space of a single shot. Or what about a climactic appearance of the Good Witch of the North to Sailor in a near-death vision? The moment—surprising but carefully prepared for—gets one of the film's biggest laughs, but on an emotional level, it seems, in light of what the experience inspires the character to do at the end, meant to be taken at least somewhat seriously?

If nothing else, the whole film could be seen as an "is-David Lynch-serious-or-isn't-he" balancing act. On its surface, the film seems populated with wacky grotesques, all encouraged by Lynch to push the limits of caricature. Lula's overcontrolling matriarch, Marietta, is a case in point; Lynch has encouraged Diane Ladd to overly stylize her character's selfishness and malevolence so that her villainy, rather than any sense of inner good intentions, comes off as mostly cartoonish rather than threatening. (If the film's occasional Wizard of Oz invocations are any indication, Marietta could be seen as its Wicked Witch of the West.)

But it's not just the film's gallery of colorful supporting characters that get in on the act. As Sailor and Lula, Nicolas Cage and Laura Dern play their lovestruck characters in an outsize manner—with Cage, especially, pushing the Elvis Presley mannerisms to the edge of self-parody—that might initially strike some viewers as merely condescending. Are these actors inviting us to mock the characters they're playing? And yet, even as some of the ways they express their love for each other might seem comical at first, underlying it all is a genuine devotion to each other, one that Cage and Dern, for all their (no doubt director-encouraged) overplaying, manage to convey with a soulfulness that peeks through the exaggerations. For Sailor and Lula, the ground underneath them seems to constantly be on the verge of cracking open, as their love is severely tested by one obstacle after another; just as their place in this cold, cruel world seems to be perpetually in doubt, so does Lynch mirror that sense of constant unease in the way he plays around with style and tone in this film. (The title, in that respect, is completely apt.)

And yet, Sailor and Lula somehow manage to persevere despite it all...and it is in the film's final 10 minutes that Lynch reveals the deeply romantic heart that has been beating underneath this danger-fraught picaresque. The end credits play over Sailor and Lula standing atop Lula's car, with Sailor crooning "Love Me Tender" as the camera does a slow, intoxicating circular pan around them. Silly? Sure. But, to this viewer at least, it's also blissfully touching and, above all, completely earned after all the crap they've gone through in the course of the film.

When it comes to David Lynch—not only in Wild at Heart, but arguably more pronounced in experimental recent features like Lost Highway, Mulholland Drive and Inland Empire, where scenes of sometimes nutty humor coexist with images of startlingly intense psychological terror—we often find ourselves laughing so we don't have to cry, whether in rapturous joy or infinite sadness. Far from being sophomoric, though, such complex emotional responses strike me as a healthy response to life's inevitable ups-and-downs. Without a sense of humor, however twisted, perhaps we'd all go insane.
Posted by Kenji Fujishima at 10/25/2010 09:00:00 PM