Regarding the cinematic achievements of Bergman and Antonioni, I'll leave it to more experienced and knowledgeable cineastes to write more eloquently about them. For me, their deaths just reminded me of how little I actually know their respective bodies of work---as opposed to merely knowing of them. (I still haven't seen either Persona or L'Avventura yet---and I call myself a film buff! Pathetic, I know...pathetic.)

Still, I didn't want to leave their deaths unacknowledged in this blog. So my contribution will simply be another movie still, this one of a Bergman film that I have seen, and one that I admire very much: from the opening moments of Fanny and Alexander, a wonderful film that functions both as a warm, loving portrait of turbulent childhood and an investigation of one artist's beginnings. For those put off by Bergman's gloominess and rampant introspection in most of his other films, Fanny and Alexander may be a lot more approachable, because it covers typically Bergmanesque territory---faith, God, religion, human connection, etc.---in a perhaps more accessible style (read: less gloomy, for the most part). I just might watch it again sometime this week (I was planning to catch up on the first two Jason Bourne films in anticipation of this weekend's release of The Bourne Ultimatum---but I have a feeling that, however good those films may be, an Ingmar Bergman film would probably be much more rewarding in the long run). 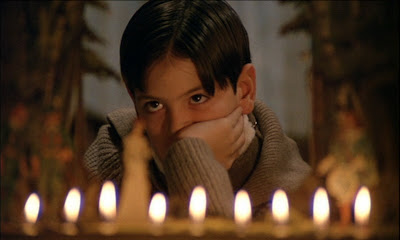 I haven't seen enough of Antonioni's major works to have much fresh things to say about him as a film artist---Blow-Up is pretty much my only personal experience with his celebrated '60s oeuvre (I did see his contribution to the three-part anthology Eros, "The Dangerous Thread of Things," and I'll just say that I like it a lot less than I do Blow-Up). But what I admire about Blow-Up---its evocation, through Antonioni's meditative visual style, of a disengaged soul amidst a hedonistic (if admittedly rather attractively so) society---is apparently what Antonioni's body of work is all about.

Boy, so many directors dying whose work I'm barely familiar with! Well, at least I've seen some Bergman and Antonioni; when it comes to the late Taiwanese director Edward Yang, who passed away a few weeks ago, I pretty much know nothing about his films except that he made the celebrated A Brighter Summer Day and Yi Yi and that his films are the humanistic and sympathetic kind that I respond to quite intensely.

So many movies, seemingly so little time. (Sometimes I feel like I should just take a break from everything and go into a private movie retreat for a few months...)