One From the Heart

EAST BRUNSWICK, N.J.—To continue this brief musical detour here at My Life, at 24 Frames Per Second, here's my musical discovery of the week: 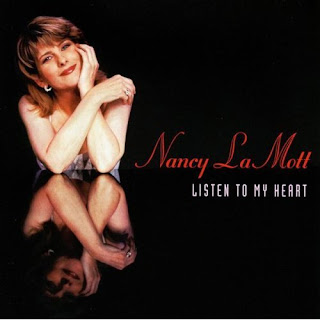 Never heard of Nancy LaMott or this album? Well then, get right on it, I say!

LaMott was a cabaret singer who, after years of professional and personal struggle—among them persistent health problems from an intestinal disease—finally made waves in the New York cabaret circuit in the 1990s, to the point where she was even invited to perform in front of the Clintons at the White House twice, in '93 and '94. Alas, because of a uterine cancer diagnosed too late, LaMott was taken from us at the way-too-early age of 43.

My introduction to Nancy LaMott came thanks to one of her most prominent supporters, the great WNYC radio personality Jonathan Schwartz. He customarily ends his weekend radio broadcasts with a Nancy LaMott recording—that's how passionately devoted he was, and still is, to her music-making—and a while back, he ended one of his radio shows with an interpretation of Van Morrison's "Moondance" that was recorded in Atlantic City in 1988. I didn't know it was LaMott I was hearing at the time; all I remember was marveling at how this singer made the song sound like something literally shimmering under moonlight. I had to wait a few months later before I finally discovered the identity of the singer behind that rapturous, transcendent interpretation; then I started taking notice of other LaMott recordings Schwartz played during his shows.

Surely "glorious" is the most apt word to describe her voice...but these days, what does having a "glorious" voice actually mean? To many people, it seems, being a great singer means being able to belt a lot and thrown in a lot of showy melisma—the fallacious Whitney Houston/Mariah Carey conception of musical artistry that television shows like "American Idol" present as the gold standard of vocal performance. LaMott can certainly belt along with the best of them, but she always married dazzling vocals with a wide-ranging emotional directness that brought fresh meaning to the words she sang. And it's that purity, finally, that leaves my hair standing on end even when she's at her quietest and most intimate. Every rendition of hers is an emotional drama, whether in the throes of wistful regret, deep yearning or plain joy.

I finally got around to listening to most of her handful of full-length albums recently, and while all of them—including Beautiful Baby (1991), Come Rain or Come Shine (1992) and My Foolish Heart (1993)—are chock full of wonderful performances, to my mind, it's her 1995 album Listen to My Heart that towers above the others. One of the reasons for this is extra-musical: This was the final album she completed before she died in late 1995, and, taking that into account, her rendition of songs like "The Secret o' Life" and "Ordinary Miracles" can't help but gain an added layer of tragic resonance. The other reason, though, is purely musical: For this album, she has a full orchestra backing her—as opposed to just a piano, flute and/or cello in her previous albums—and the beautifully rich orchestral arrangements fully match the passion and intensity of LaMott's singing. The cumulative effect is shattering. At one point she sings "We can be kind / We can take care of each other / We can remember that deep down inside / We all need the same thing," and, for an instant at least, she almost makes you believe that those words contain the secret to a better world. Listen to My Heart is, if I may be so bold, LaMott's Abbey Road—a career summation that finds an artist throwing caution to the wind and going out guns a-blazing. It's just that, in LaMott's case, "guns a-blazing" means ending with a delicate, soothing performance of "I'll Be Here With You."

Here's that song, as performed on "Good Morning America" in 1995 with piano accompaniment:

She and her sublime voice and artistry will certainly be here with us forever—certainly through this marvelous album.

P.S. That aforementioned "Moondance" recording was released on CD in 2008 in a two-disc collection of posthumous recordings entitled Ask Me Again. It's a bit of a rip-off, to be honest; the 20 tracks could easily have been squeezed onto one CD, with room to spare. But that rendition of "Moondance," at least, is worth the extra expense.